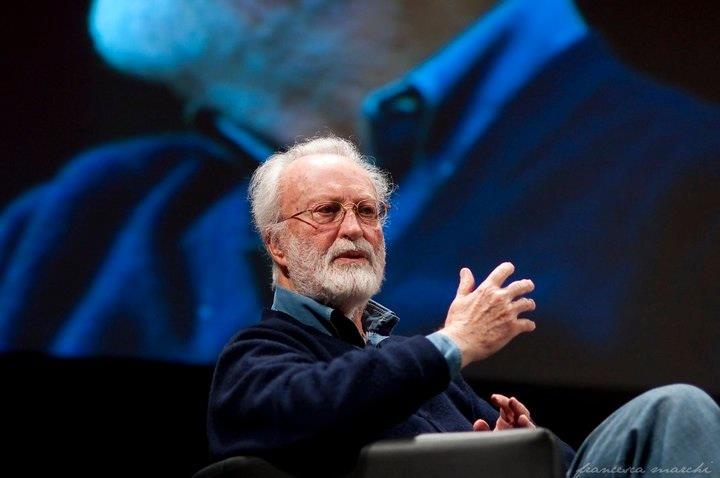 A measure of this pontificate’s farcical dysfunction is that its leading chronicler is Eugenio Scalfari, a doddering apostate, atheist, and communist to whom Jorge Bergoglio routinely confides his heretical thoughts. Scalfari is the pope’s favorite interviewer, a veritable Boswell to Bergoglio’s Samuel Johnson. The pope is so fond of their exchanges that he had the Vatican publishing house issue an early batch of their interviews as a book.

In one of those interviews, the pope told Scalfari, an ex-Catholic, that he had no interest in persuading him to return to the faith, and that atheists like him should just follow their own sense of right and wrong. The pope called much of what passes for Catholic evangelization “solemn nonsense” and praised the “autonomy” of conscience.

“The most surprising thing he told me was ‘God is not Catholic,’ ” Scalfari said after the interview.

In recent days, we have also learned from Scalfari that Jesus Christ is not God, according to Bergoglio. Scalfari based that statement on his many chats with the pope. “Pope Francis conceives Christ as Jesus of Nazareth, a man, not God incarnate,” said Scalfari.

The Vatican’s denial of this report of blatant heresy was lackadaisical and scandalously indirect, insofar as it came not from the pope himself but from a press flak. The fact that the pope continues to grant interview after interview to a journalist whom the Vatican press office has said for years “misquotes” him indicates the pope is perfectly happy with Scalfari’s reconstructions and the confusion that they cause.

Another recent Scalfari report has the pope claiming that Jesus Christ did not rise from the dead bodily. Scalfari quotes the pope as saying that Jesus “was a man until he was placed in the tomb by the women who recomposed his body. That night, in the tomb, the man disappeared and came forth from the grotto in the semblance of a spirit that met the women and the Apostles while still preserving the shadow of the person, and then he definitely disappeared.”

The Vatican’s response to that report was to dust off its previous denial and reissue it. Again, the denial came not from the pope but from a press office.

The pope has yet to deny personally and directly any of Scalfari’s accounts. Consequently, the Vatican press office’s denials, which amount to saying that Scalfari is a sloppy journalist who doesn’t bother to use a tape recorder, can only be considered lawyerly misdirection.

The pope’s silence speaks volumes. Like many other renegade Jesuits, Bergoglio enjoys dabbling in outré theological theories. He is very much like the flaky Jesuits whom I remember from California’s Bay Area, who would toy with students by questioning everything from the miracles in the Bible to the most basic tenets of the Nicene Creed. These frauds enjoyed planting seeds of doubt in the minds of students: Did Jesus really rise from the dead? Or was the “rise” simply a reference to the buoyed spirits of his apostles? I can recall absurd lectures along those lines.

Pope Francis has said on more than one occasion that the miracle of the loaves and fishes wasn’t a miracle but a lesson in “sharing” Jesus Christ delivered to members of the crowd, who, upon hearing his persuasive words, retrieved food hidden in their bags and passed it to their neighbors. That the pope gravitates to such deconstructionist crap bolsters Scalfari’s claims.

Were the Nicene Creed put up for a secret vote at one of this pontificate’s ludicrous synods, it wouldn’t pass. Just as the pope wants to rewrite the “Our Father” prayer, so he no doubt would like to tinker with sections of the Nicene Creed. We don’t even know if he believes in the existence of hell. According to Scalfari, the pope told him that the unrepentant don’t go to hell but simply disappear. That, too, generated a Vatican denial. But the pope has made that claim more than once, saying that the wicked suffer “annihilation,” which means their “journey is finished.”

We have learned much more about the pope’s real thoughts from Scalfari than from Bergoglio’s brown-nosing biographers, who feel the need to protect him from himself by explaining what he “really meant.” In the Scalfari interviews, we get the modernist pope in full, a religious relativist who finds the next life far less interesting than this one.