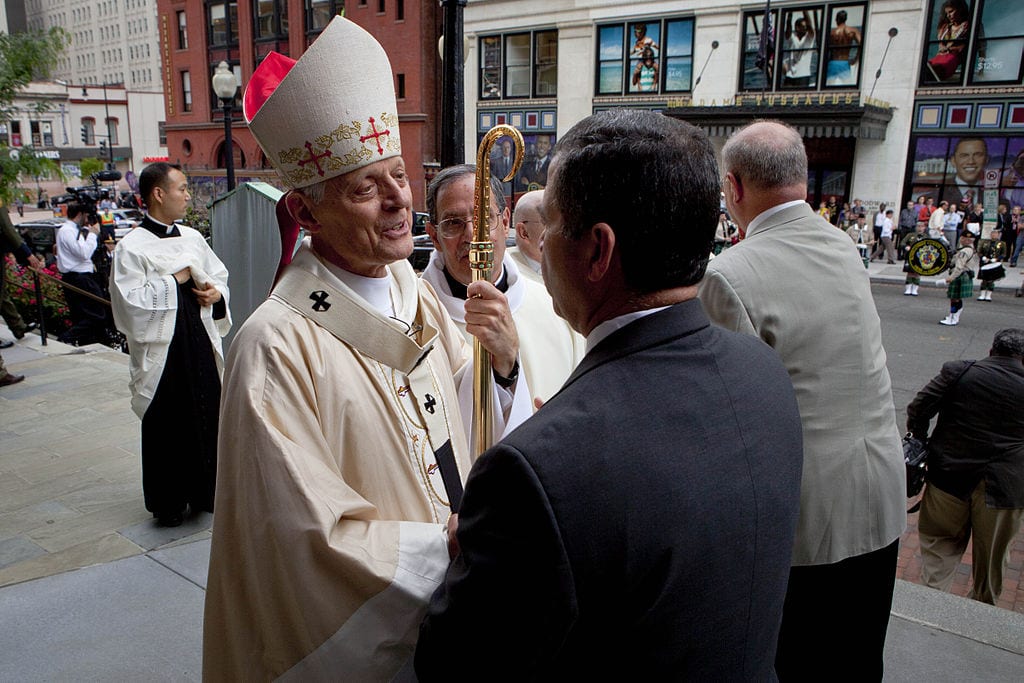 In the latest revelation about Donald Wuerl — that, contrary to his claims of ignorance, he knew about McCarrick’s misconduct for at least 14 years — he emerges as the amoral but self-protective bureaucrat, undone by his own pass-the-buck-style record-keeping, which gives a grimly ironic dimension to his downfall.

Wuerl’s policy wasn’t one of zero tolerance but of zero legal exposure, and toward that end he needed to keep records of complaints he had received and transmitted to the papal nuncio. One of McCarrick’s victims, Robert Ciolek, had the presence of mind to ask the Diocese of Pittsburgh to see a personnel file related to his settlement, which established his memory of events: that he had told the Pittsburgh diocesan review board about McCarrick’s predation, and that Wuerl, at Ciolek’s request, had spoken with the papal nuncio about the complaint.

Ciolek wasn’t permitted to make a copy of the documents in the file but he caught a glimpse of its most relevant section, which apparently left the Diocese of Pittsburgh with no choice but to admit Wuerl’s knowledge, as much as that must have pained Wuerl’s hand-picked successor in Pittsburgh, Bishop David Zubik. No doubt Wuerl is furious at Zubik for letting Ciolek gaze at those pesky paragraphs. Reported the Washington Post:

Ciolek traveled to Pittsburgh in early December, where he was allowed to see a portion of a file about his case. It was the priest personnel file of the Pittsburgh priest Ciolek says abused him in seminary. Diocesan officials would not allow Ciolek to make copies of or photograph the documents.

However, he said he saw a very brief — perhaps one or two short paragraphs — memo in the file. From his memory, Ciolek said the document was dated right around the time of his Pittsburgh testimony. The words were typed, he said.

“It memorialized Wuerl’s meeting with the papal nuncio earlier that week, and indicated he had shared with the papal nuncio, Archbishop Montalvo, the details involving allegations I had made about McCarrick.” The memo was in the first person, Ciolek said, and included Wuerl’s handwritten initials after his printed name. It said nothing about any response by Montalvo or anything else, Ciolek said.

Caught out in a huge lie, Wuerl is now telling new lies of such pathetic Clintonian straining that they are not even worth engaging. Lying for months, Wuerl knew that he had to head off Ciolek and made sure to have his phalanx of lawyers stonewall him for as long as possible. Ciolek requested a meeting with Wuerl in the hopes of getting him to come clean, but Wuerl wouldn’t grant it without extensive conditions, according to the Post. Until just days ago, Wuerl’s lawyers were still hoping to pacify Ciolek, but Ciolek had grown tired of Wuerl’s duplicity:

Ciolek, who comes from a devout, churchgoing family, said he wanted Wuerl to apologize and own up to what happened, actions he feels could be an important part of Catholic healing.

“My hope was real reform, permanent change, serious steps,” he said. “Wuerl’s honesty and apology would have gone a long way to giving the Catholic community better hope that the church is serious about change.”

Beyond busting Wuerl as a liar, Ciolek’s revelation also confirms Wuerl’s indifference to the threat of McCarrick as a predator. For at least 14 years, Wuerl knew of McCarrick’s predatory habits and didn’t take any steps to protect his priests and seminarians from him. Wuerl related to McCarrick not as a shepherd of souls or a protector of his flock but as a corrupt peer willing to overlook his predation. Just a year or so after hearing Ciolek’s story of harassment at McCarrick’s hands, Wuerl was feting McCarrick and praising his predecessor’s tenure. Wuerl’s diocesan newspaper would consistently give McCarrick glowing coverage and the two would often concelebrate masses together. Just go back and look at all the pictures of the two schmoozing together at this or that gala. All the while Wuerl knew McCarrick had introduced grave corruption into the Church.

Undoubtedly, McCarrick had played a role in choosing Wuerl as his successor, sizing him up as a trustworthy ally. But why? What gave McCarrick that confidence? Did he have dirt on Wuerl? Did McCarrick know the details of Wuerl’s apprenticeship under Cardinal John Wright? Perhaps.

Long before Wuerl concealed McCarrick’s misconduct, he had served as the long-time secretary to Wright, who was also an accused homosexual predator. In The Rite of Sodomy, journalist Randy Engel reports that Wright’s “pederastic predilections were an ‘open secret’” and details a specific accusation of abuse leveled against Wright. Through Wright, Wuerl must have received his first education in cover-ups and the keeping of secrets. If he could cover for Wright, why not McCarrick?

Wuerl’s training under Wright cries out for greater scrutiny, as even members of the Catholic left, such as former Newsweek religion editor Kenneth Woodward, now note. Woodward’s beat used to include reporting on Wright and had heard about his role in turning the Pittsburgh seminary into a “haven” for gay priests. No one was closer to Wright than Wuerl, wrote Woodward in Commonweal:

In 1969, at the age of sixty, Pope Paul VI chose Wright to head the Congregation for Priests in Rome and elevated him to cardinal. It was there, in the frenzied initial years of the post-council era, that I first heard stories of his leading a double life rather openly with a younger lover. What interests me now is not the private details of this double life, but whether it influenced how he ran the congregation overseeing the selection, training, and formation of the clergy. Donald Wuerl, who recently resigned as archbishop of Washington D.C., would surely know the truth about Wright. Wuerl’s first assignment after ordination at the age of thirty-one was as secretary to then Bishop Wright of Pittsburgh in 1966. The younger priest was said to be closer to the cardinal than the hair on his head. He became Wright’s omnipresent full-time personal assistant when the latter moved to Rome, even sitting in for him during the papal conclave that elected John Paul II.

Were the Vatican serious about uprooting the culture that made the McCarrick scandal possible, it would press Wuerl to come clean about Wright and the role that Wright played in forming a Gay Mafia in the Church. But of course that won’t happen under this pope, whose own knowledge of McCarrick’s misdeeds has come to light and whose papal election was a byproduct of that homosexual network’s pervasive influence.

Far from punishing Wuerl, Pope Francis has been at pains to protect him and thank him for his “nobility.” Wuerl remains the head of the archdiocese of Washington, D.C, as an “apostolic administrator,” but may soon depart from that position. Yet it appears that Pope Francis will add insult to injury by letting him in effect choose his successor.

The image of the Church this leaves is one of a hopelessly corrupt bureaucracy in which bishops hide behind the most minimalist pro forma actions while keeping known predators in circulation and then lying about it. Even if one were to take Wuerl’s latest statement seriously, he is conceding at the very least that he knew McCarrick had been accused of corrupting a priest. In a church where holiness is the first, not the last, consideration, a responsible bishop would have followed up on the matter and been greatly troubled by it. For Wuerl, Ciolek’s complaint was simply a matter of box-checking.

Wuerl continues to insist, in spite of his obvious lying about his level of knowledge concerning McCarrick for over a half a year, that he “acted appropriately,” which is the language not of a pastor but of a nabbed corporate CEO. Wuerl’s career ends as it began under Cardinal Wright — as a reptilian climber and cold operator for whom duping the faithful became second nature.