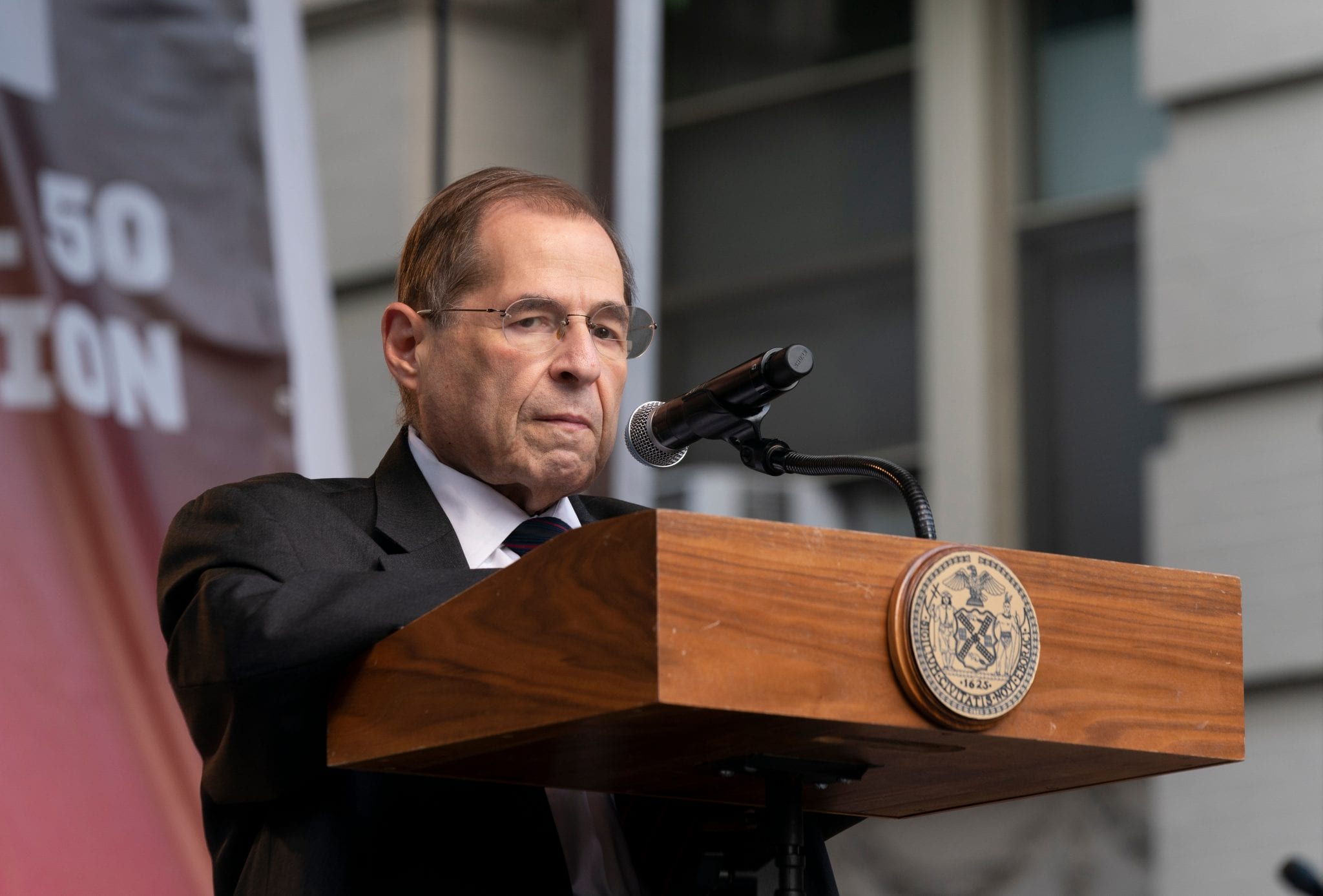 House Judiciary Committee (HJC) Chairman Jerry Nadler is on a fool’s errand if he thinks he can uncover persuasive evidence of criminal conduct by Donald Trump — the high crimes and misdemeanor necessary for the president’s impeachment — when the specially recruited, highly partisan Mueller team of prosecutors could not. This shortcoming is particularly telling because the pattern for the past 50 years has been exactly the reverse: Congress inevitably has had to rely on evidence garnered by special prosecution teams, which possess investigation tools and expertise that Congress simply cannot duplicate.

In modern times, the pattern stretches back at least as far as 1957, with Sen. John McClellan’s Select Committee on Improper Activities in Labor and Management (the McClellan Rackets Committee). The ranting and raving of its chief counsel Robert Kennedy brought publicity but no actual prosecutions — particularly as long as the FBI’s J. Edgar Hoover chose not to devote resources to combating organized crime.

That all changed in 1961, when RFK became the youngest attorney general in the nation’s history and led a Department of Justice (DOJ) with significant tools for investigation. On the positive side, he totally revamped the Organized Crime Section in the DOJ to mount a frontal assault on mob-related activities through creation of Organized Crime Strike Force. By 1972, as described in this documentary, organized crime families had been all but eliminated outside of New York City. On the negative side, also beginning with RFK, the use and abuse of DOJ’s powers began to affect highly politicized prosecutions.

In the same time frame, legislation designed to increase the Hill’s investigative powers gave Congress the ability to grant witnesses limited immunity from prosecution. The intent of the Organized Crime Control Act of 1970, however, boomeranged when the Select Committee on Presidential Campaign Activities (the Ervin Committee) granted immunity to John Dean, over the strenuous objections of Special Prosecutor Archibald Cox, with Sen. Sam Ervin asserting that it was more important for Americans to hear about Watergate from his committee hearings even if the resulting publicity prevented future convictions for the wrongdoing his committee exposed.

While the Ervin Committee hearings certainly dominated the news cycle, when it came to developing the actual evidence necessary to secure Nixon’s impeachment, the work of both that committee and HJC’s impeachment inquiry fell woefully short. Here is what Special Prosecutor Leon Jaworski told Washington Post reporter Bob Woodward in a December 5, 1974, exclusive interview:

Most important “focus” in his view was working out arrangement to get the material to House Judiciary; this especially critical because of decision not to indict. HJC was “very slow” getting started, he sez, and would never have gotten off the ground without the info provided by SPO [the Special Prosecutor’s Office]. It was “a roadmap” he stressed more than a few times.

Sez HJC “had a very difficult time getting underway,” that Doar admitted it to him. Doar “an excellent man, there. Still he had nothing to catch hold of. he was engulfed by the [Ervin] Watergate Committee material.” but it was badly organized and not nearly definitive enough.

(Quoted in full from the second and third paragraphs of the first page of Woodward’s typed interview notes, now housed at the Harry Ransom Center at the University of Texas at Austin.)

Jaworski’s candid appraisal is really an understatement. Congressional hearings are very effective at “viewing with alarm,” but inadequate in developing actual evidence of criminal wrongdoing appropriate for a court of law. Ordinarily, this doesn’t matter much — except in the case of impeachment initiatives, where much greater precision is vital to building a persuasive case.

In contrast, DOJ’s use of FBI FD-302 forms and grand juries combine to provide positively awesome investigatory weapons, particularly in the hands of experienced prosecutors. These tools are fully appropriate for investigating real crimes. The potential for their abuse comes when they are used for political purposes.

FBI FD-302 forms are used by agents to make a record of interviews with witnesses and potential defendants alike. Since FBI guidelines prohibit any recordings, these forms — which interviewees never get to see — end up being the only “official” record. That enables DOJ prosecutors to use them as a whip before both grand juries and court prosecutions, with square-jawed, ramrod-straight agents swearing to the accuracy of their own notes.

Here is what Wikipedia (the ultimate source!) says about FD-302 forms:

The use of the FD-302 has been criticized as a form of institutionalized perjury due to FBI guidelines that prohibit recordings of interviews. Prominent defense lawyers and former FBI agents have stated that they believe that the method of interviewing by the FBI is designed to expose interviewees to potential perjury or false statement criminal charges when the interviewee is deposed in a grand jury and has to contradict the official record presented by the FBI. They have also stated that perjury by FBI agents allows the FBI to use the leverage of a potential criminal charge to turn an innocent witness into an informant.

In the same vein, grand jury appearances are never pleasant experiences. Your own lawyer — and you’d sure better have retained one — cannot be present while you are questioned by DOJ prosecutors who are expert in posing deliberately complex and ambiguous questions, perhaps intentionally designed to exploit vague memories or illicit more positive interpretations of past events that they later can claim to have been untruthful.

The purpose of a grand jury inquiry is supposedly to determine whether there is a basis to believe that a crime has been committed. You don’t get to present any witnesses in your defense or even know about or question those produced by prosecutors. It is no wonder that former New York State Chief Judge Sol Wachtler was famously quoted by Tom Wolfe in The Bonfire of the Vanities saying, “A grand jury would ‘indict a ham sandwich,’ if that’s what you wanted.”

Prosecutorial abuse of the grand jury process almost never comes to light because of the absolute secrecy of these proceedings. Indeed, the Chief District Court Judge Beryl Howell recently ruled in In Re Petition of Geoff Shepard (1:11-mc-00044-BAH) that judges in the District of Columbia don’t have the power to unseal grand jury transcripts even in the face of credible accusations of grand jury abuse.

How did we get to this point? The grand jury’s original function in England was to protect citizens from the king’s officers, who first had to convince a target’s neighbors that a crime indeed had been committed before any serious charges could be brought. It may be heresy, but a case could be made that today’s use (and abuse) of grand juries might well be seen as a violation of the Fifth Amendment’s guarantees of due process — were it not for the specific recognition of grand juries in that very same amendment.

The one-two punch of FD-302 forms and use of grand juries are valuable tools in investigating serious crimes, particularly in prosecuting organized crime, but their more recent use in political prosecutions seems highly questionable.

So, where does all this leave HJC Chairman Jerry Nadler? He is in roughly the same spot as Jaworski described above: HJC is easily the most politicized committee in the House, so it’s easy for Nadler to get a party-line vote to call witnesses. But they don’t have the resources or expertise to proceed by themselves. In addition, Nadler is hardly an appealing or attractive figure to the media. He’s not folksy like Sam Ervin, he’s not an aggressive charlatan like Chuck Schumer, and he hasn’t shown himself to be particularly bright or even politically savvy. Coupled with his dour countenance is the fact that all the precedents for HJC going it alone are contrary to his intended course of action.

In the Nixon and Clinton impeachment proceedings, HJC staff relied almost exclusively on special prosecutors for actual evidence of wrongdoing. In Nixon’s case, WSPF prosecutors met secretly with then–Chief Judge John Sirica to convince him to allow the sealed transmission of grand jury information (that is, the famous “Road Map”). When even that turned out not to be specific enough, they met secretly with HJC staff during May and June to share additional grand jury materials. They believed that their cause was righteous, so it didn’t seem to matter that their actions were in violation of strict grand jury secrecy rules.

WSPF prosecutors went even further: The D.C. Circuit had already ruled that Congress had no legal right to obtain Nixon’s White House tapes due to the separation of powers structure of our Constitution and declined to enforce their subpoenas. Yet the prosecutors and Judge Sirica knew that several tapes were among the materials included in the government-issued briefcase that accompanied the Road Map. Indeed, the WSPF Report, issued in October 1975, stated there were 12 such tapes.

The situation was a little different with Ken Starr’s investigation of President Clinton. Starr submitted his 453-page report (Referral from Independent Counsel Kenneth W. Starr in Conformity with the Requirement of Title 28, United States Code, Section 595(c)) on September 9, 1998. After two days of debate, the House voted 363-63 to release it to the public. Quickly uploaded on the internet, it was accessed by some 20 million people.

Today, neither approach is available to Nadler. First, it’s not at all clear that the Mueller team produced any viable grand jury material during the course of its investigations — at least they didn’t think so. Second, the D.C. Circuit recently ruled in the McKeever case that judges have no authority to unseal any grand jury testimony beyond the strict limits of Criminal Rule 6(e). Indeed, Chief Judge Howell declined to enforce HJC’s subpoena for such materials on the same day she dismissed my own petition for grand jury transcripts referenced above. Fourth, Attorney General Bill Barr has already declined to produce such grand jury material and is not about to wink at any surreptitious transmittal, as did Jaworski. Fifth, with the Senate in Republican hands, the likelihood of new legislation expanding Rule 6(e) to allow such a transfer is nil.

Oh, Nadler will continue to rant and rave; he and his committee will continue to issue and demand compliance with their subpoenas, but to no avail. Law and precedent are against them. It seems clear that our Founding Fathers never envisioned that the executive would be a party to destroying its own president. They believed the House could properly and thoroughly investigate possible presidential wrongdoing entirely on its own. But with Nixon and Clinton, the HJC proved itself to be totally lost and unable to function as prosecutors absent secret and wrongful assistance from special prosecution teams. Jerry Nadler has no apparent appreciation of this history — and wrongly believes his HJC can ferret out evidence somehow missed or unappreciated by Mueller’s team. He is wrong, so wrong that his actions are going to cost his party dearly come next November.

Geoff Shepard came to D.C. as a White House Fellow right after graduation from Harvard Law School and spent five years on Nixon’s White House staff, including being deputy counsel on his Watergate defense team. See more on his website: www.geoffshepard.com.