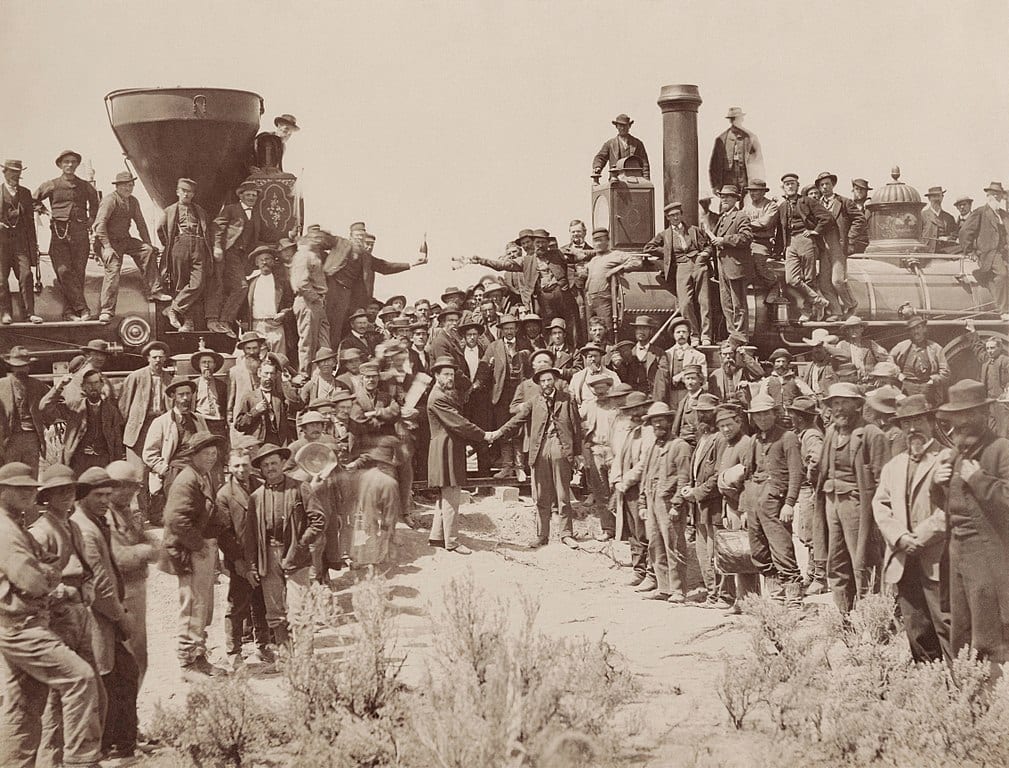 It’s interesting to contemplate the settlement of the American West that was accomplished in eighty-six years (1804-1890), the equivalent of a long lifetime. We are approaching the 150th anniversary of the event that completed that surge known as American Manifest Destiny.

In 1804, Lewis and Clark and the Corps of Discovery set out from St. Louis on their legendary roundtrip trek to the Pacific. Then for the generation following the West was crisscrossed by a couple of thousand nervy, unkempt, entrepreneurial eccentrics known to us as “mountain men.” After that came the huge multi-years emigration to Oregon and California, which continued to settle those locales (California was a populated Mexican possession) before the Intermountain West itself that all those wagon trains (many times guided by former mountain men) had passed through. Then came the railroads, which filled in the map, being built amidst the tumult of multiple Indian wars that eventually settled the tribes onto reservations, still extant.

In 1890, the scholar Frederick Jackson Turner published an essay titled “The Significance of the Frontier in American History,” its thesis being that “the frontier” as a driver of Manifest Destiny, had ceased to exist, and that the United States (along with its official territories) was now a “settled” entity. The advent of the railroads was the deciding factor that accomplished this fact.

On May 10, 1869, Promontory Summit, Utah Territory — a remote outpost in the desert — was the scene of a great milestone in the history of Manifest Destiny. Here, two railroads, the westward-reaching Union Pacific (UP) and the eastward-reaching Central Pacific (CP) linked to form the transcontinental route. A golden spike was driven as the last link in the coast-to-coast span. Today that 17.6 carats spike can be found in the Cantor Arts Center at Stanford University.

An early supporter of the transcontinental railroad was Abraham Lincoln. Despite his many distractions related to the prosecution of the Civil War, he managed in 1864 to push through Congress “The Pacific Railroad Act.” The legislation supported the long list of investors and entrepreneurs behind the project. Lincoln thought it important “not only as a military necessity, but as a means of holding the Pacific coast to the Union,” according to Stephen Ambrose’s book, Nothing Like It in the World (2000).

The jumping-off points were Omaha and Sacramento. The UP task was to cross the Great Plains with its vagaries of extreme weather (blizzards, tornados, pounding hailstorms) during the ongoing Indian troubles of the time. The CPs was nothing less than the conquest of the Sierra Nevada mountain range with its abrupt elevation gains and copious winter snows, and then to cross the sagebrush deserts of the Great Basin of present Nevada and Utah. The hard-driving UP gangs measured success in the sheer number of miles covered by tracks per day (two was the average); the CP by the massive moving of the earth by pick-and-shovel labor and dynamite, blasting to build tunnels, or in the construction of sturdy wooden trestles spanning deep mountain canyons. The Central Pacific route was indeed an engineering marvel. Stephen Ambrose: “The building of one mile of road between Newcastle and Cisco [California] involved more labor and expense than the construction of 20 miles on the level prairie.” The UP would cover a total of 726 miles; the CP, 690. The CP held the record for miles-per-day progress, covering 10 miles during its Great Basin desert traverse.

The construction of the transcontinental railroad was an endeavor requiring the labor of thousands, the low paid ($3 per day), arduous work performed mostly by immigrants. On the UP line they were Germans, Eastern Europeans, and especially the Irish. The CP route was built by the Chinese, who had been funneling through San Francisco since the California Gold Rush days. Manifest Destiny was accomplished in both westward and eastward tides by people who had been born in foreign lands.

Present among the celebrants at Promontory were two of the many politicians and businessmen who had brought the gargantuan project to fruition: Leland Stanford (CP) and Grenville Dodge (UP). Stanford, the California entrepreneur, ex- governor, future U.S. Senator and university namesake, known for his grandiosity and shady dealings in Golden State politics; and Dodge, retired Union general and Lincoln confidante, who with military-like discipline administered through his tough track foremen, the brothers Jack and Dan Casement, drove hard his rowdy Irish work crews to the finish. As the great locomotives, No.119 (UP), and No. 60 (CP – “The Jupiter”), faced each other, Stanford ceremoniously struck at the golden spike and missed, striking the rail. After a do-over, journalists cabled their editors, and a telegram was sent to President Ulysses Grant: “Sir: We have the honor to report that the last rail is laid, the last spike is driven, the Pacific Railroad is finished”. The martyred Lincoln’s dream of a united east and west had been realized, and there were celebrations across the country. Ambrose: “Travel between the coasts that had previously taken months overland or by sea, now took days. Mail and freight rates plummeted. It was now possible to travel between New York and San Francisco in a mere seven days.”

In our age of political correctness that denigrates the validity of history itself, the construction of the transcontinental railroad stands as the greatest feat of engineering prowess in American history.