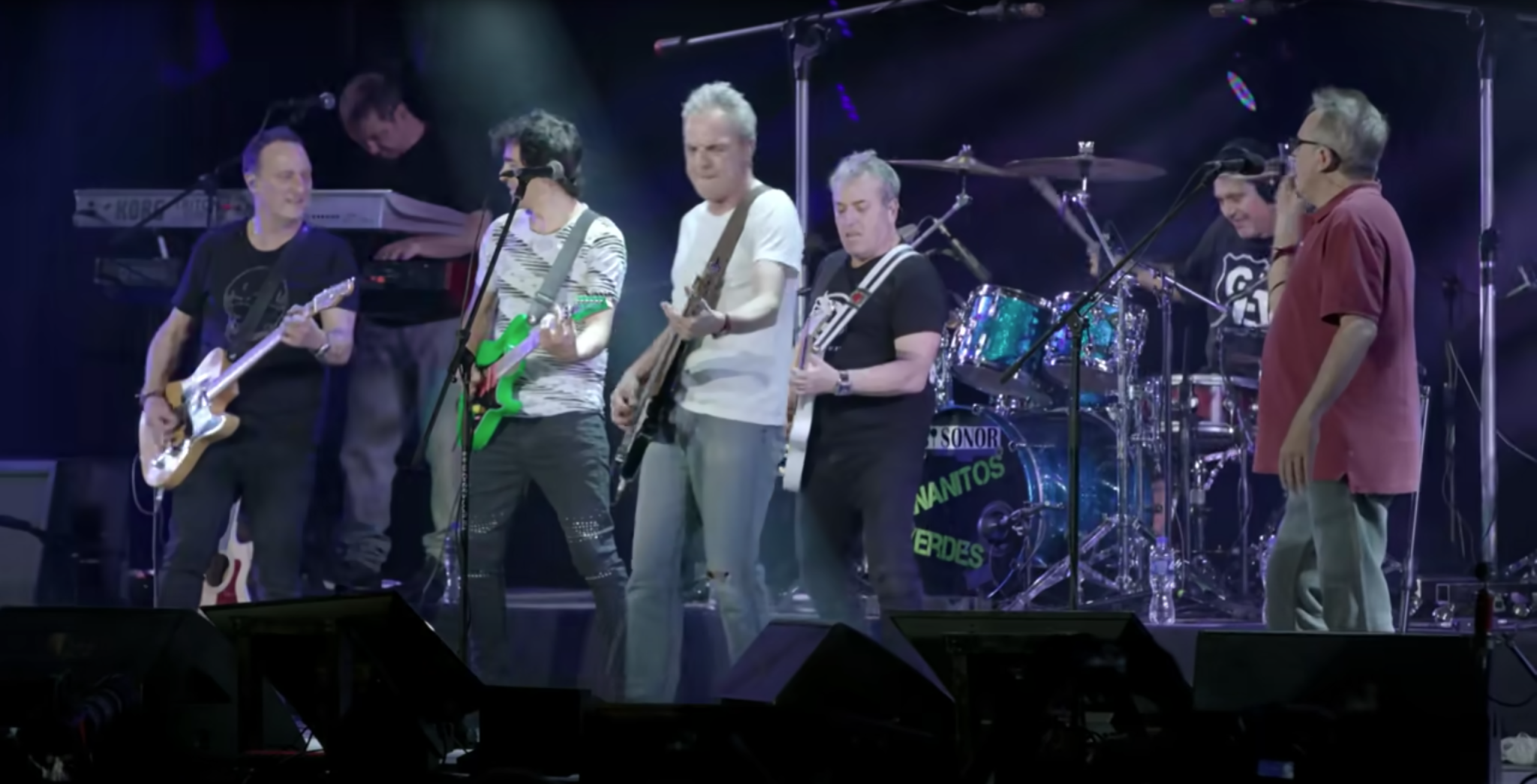 My mates from the Spanish band Hombres G are on tour in the United States. Today they’re in San Francisco, tomorrow they’ll be in Phoenix, the day after they’ll visit Tucson. After Mexico, they will return to North America in June to visit Dallas, Houston, San Antonio, Chicago, New York, Maryland, and many other venues. They are the true ambassadors of Spanish pop and they are also nice guys. They are four normal dudes, led by David Summers, who have managed to stick together since 1982, going through all the possible stages: from the success and fan madness of their early youth to a few years in the background, and now back to concerts for mass audiences now that they have gone gray-haired. When I grow up, I want to be like David.

Since the ’80s, none of these four musicians have been able to go out in public, no matter where on earth they are, without being accosted by a cloud of fans. And despite that, they haven’t turned into assholes. That’s something that fascinates me. It has taken much less to turn me into a complete asshole.

Considering that they were pioneers in unleashing fan madness in Spain, I had always imagined their dressing room full of all kinds of substances, scantily clad ladies, rock star extravagance, and dazzling luxury. When I was finally invited to join them in the dressing room before a concert, I was a little disappointed: it looked more like a first communion picnic. There were potato chips, sandwiches, and orange Fanta. And the guys were chatting away with the other workers on their team until it was time to go on stage. I don’t know, they didn’t break any guitars over the manager’s head, there was no cocaine or anything like that, nor did they piss on the sandwiches, or did they ask the girls waiting at the door to throw their bras at them; although the latter happened spontaneously on stage, as usual, as soon as they sang Suéltate el pelo (Let Your Hair Down) when a shower of bras drew attention towards David, who was dodging them, and all the guys turned towards the girls who were throwing them. Human nature and the existence of two perfectly differentiated sexes can be explained in the throwing of a bra during a Hombres G concert.

We often appreciate it when big stars behave normally. But normal for the typical Hollywood star is to be photographed with orphans for the tabloids, give an interview sermon on poverty and climate change, and then board a private jet and fly back home pecking at caviar and sipping French champagne. David, on the other hand, is at home in his neighborhood. Not so long ago, we had a meal together close to his place in Madrid in a neighborhood restaurant and no one treated him any differently than any other neighbor.

In a way, the Hombres G, to put them in context, are the Spanish Beatles, with the difference that David has never been an idiot like Lennon, has had no need to dress like a poor man and smoke weird stuff in a commune, and would never hook up with Yoko Ono, if only to avoid the jokes that the group’s drummer would make incessantly.

When David was asked why Hombres G, being so famous, was left out of “La Movida,” which is the name given to the movement that revolutionized Spanish pop in the ’80s, he said: “they kicked us out of La Movida for being posh, for envy, and for not being gay.” At that time to succeed in music in Madrid, you had to be a drug addict, gay, dress like a punk, have a traumatic childhood, and dress up as a nun on stage. Hombres G was more about having a shower each morning, dressing up like men, and fooling around with the fans. David has also made a strong defense of freedom in this time of cancellations. In one of his last songs he sent a message in this spirit: “Yo soy más chulo que nadie / ¿Tú y cuántos más? / Ya nadie puede humillarme / Nadie me puede controlar” (I am more of a pimp than anyone else / You and how many others / Nobody can humiliate me anymore / Nobody can control me).

Specializing in danceable songs of love and fun, they have rarely dedicated themselves to protest songs. The exception was in the ’90s when showing their more punk rock side, they wrote a love song dedicated to the Cuban satrap: “Matar a Castro” (To kill a Castro), in which an innocent Cuban girl shoots the dictator. It was hilarious to see the communists whine about such a terrible attack on their violent and adored regime.

Their greatest hits, El ataque de las chicas cocodrilo (The Attack of the Crocodile Girls), Sufre mamón (Suffer Idiot), Visite nuestro bar (Visit Our Bar), and Voy a pasármelo bien (I’m Going to Have a Good Time) are the soundtrack of the youth of several generations. Normally one is ashamed of what one listened to when one was 15 years old; this doesn’t happen to me with Hombres G.

In summary, I confess that I wouldn’t normally recommend that you go to a concert of a Spanish band on tour in the United States; you know, we don’t usually export the best of us. But Hombres G is a show worth seeing. Because they are survivors. Because they have talent. Because you can go crazy to their poprock. And, what the heck, because they’re my friends.