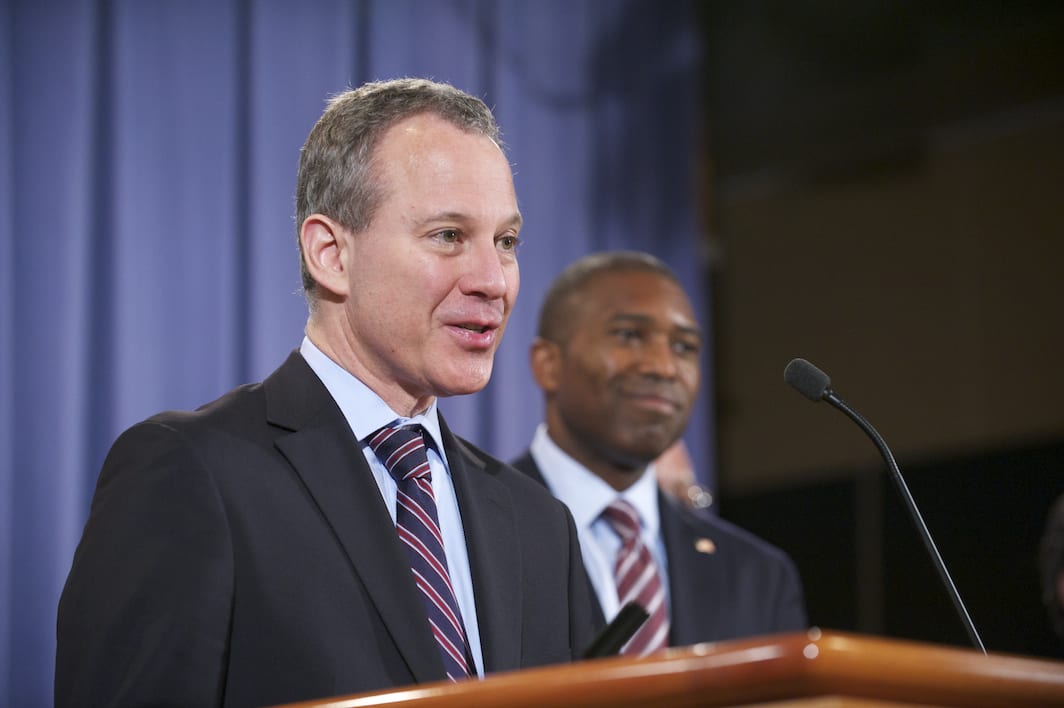 So his antics finally caught up with him.

In all of which I had come to the thoroughgoing conclusion that Mr. Schneiderman’s conduct as Attorney General indicated he was, simply put, a fraud — and a dangerous fraud at that. This was no dedicated public servant of the liberal variety. This was someone who, as the words of a leftist columnist for the Village Voice described it, saw his job as being “transactional.” Which is to say — “You do something for me, and I will use the powers of my job as Attorney General to do something for you.”

Mr. Schneiderman had come to my attention as I was reading the public prints and learning that Schneiderman was suing a private citizen in New York named… Donald Trump. The lawsuit was over what was called in the day “Trump University,” a typical organization of motivational-style instructors who were experts in the real estate business. One paid to hear from the speakers and learn the how-to of real estate but then… horrors! — one had actually to go out and do the work. As is to be expected with such a venture, some people succeeded, others failed. So the grousings from the latter group, which was small, were quickly focused on by Schneiderman and suddenly Donald Trump’s name was giving Schneiderman lots of PR as the figurative defender of the little guy.

Having been around the political block, to me, something was, as they say, “rotten in Denmark.” Or Albany as the (frequent) case seems to be. Of all the things going on in New York State — why zero in on someone as hugely successful as Donald Trump? The idea that a billionaire ten times over was trying to defraud a handful of people out of a few thousand dollars made no sense. So, I began to look. In fact, Donald Trump took the time to speak with me directly on the issue. He was indignant. And what did I learn?

I learned that — yes, indeed — Schneiderman had been after Donald Trump for a campaign contribution. Receiving it, Schneiderman was not satisfied. Now the arm was being put on Trump family members — daughter Ivanka and son-in-law Jared specifically. Not satisfied there, Schneiderman was going to Trump Organization staff. And then… the hook.

Still not satisfied with what he was getting from the family Trump, he began to take another approach once elected and actually becoming the sitting attorney general. I wrote this:

You remember Khartoum the race horse. The scene is immortalized in the Oscar-winning film The Godfather.

The rich and famous Hollywood producer Jack Woltz, owner of the $600,000 Secretariat-like race horse Khartoum, refuses to put Mafia Don Vito Corleone’s favored godson Johnny Fontane in a movie. One fine morning, Woltz awakens, horrified, to find the severed head of his beloved race horse — whom he has lovingly described beforehand as “the greatest racehorse in the world” — in his blood-soaked bed. As seen here in the legendary scene from the film version of Mario Puzo’s bestselling novel. Message delivered, Don Corleone’s god son Johnny Fontane gets his movie part from the thoroughly terrified movie producer.

Think of Eric Schneiderman, the Attorney General of New York, supposed progressive “icon of the left” and a wannabe governor — as a dime store Godfather. Vicious, but Vito Corleone without the gravitas.

The core of Shakedown Schneiderman’s Don Corleone-style method of operation is captured by the famous line from the Don himself. As Puzo immortalized the line in The Godfather, the Don would get Johnny Fontane the desired movie part in unique fashion, saying of producer Woltz: “He’s a businessman. I’ll make him an offer he can’t refuse.”

The offer, of course, was Khartoum’s severed head. The blunt message? Next time it would be Woltz’s head.

What was Schneiderman’s “offer he can’t refuse” to businessman Donald Trump?

In Schneiderman’s own words to Trump’s counsel, as documented in the Trump filing, Donald Trump would be forced to settle the lawsuit Schneiderman was threatening because Trump would not “want all of the bad press.”

As in: Nice business ya got there Mr. Trump. Be a shame if anything happened to it.

To say the least, this kind of thing does not speak well of an Attorney General. I looked further into Schneiderman’s past to discover this:

The AG’s career also depends on Schneiderman keeping his coattails free of corruption charges, which thus far has been dicey. A federal sentencing memorandum on Schneiderman’s ex-State Senate colleague Shirley Huntley prompted Huntley’s attorney, according to the New York Daily News, to allege her client had information “about corruption involving Eric Schneiderman.”

This doesn’t even count the murmurs from Schneiderman’s political base of New York’s hard left that he is, among other things, a “water boy” and “transactional.”

A few weeks later I followed up with another column, “The Malversation of Eric Schneiderman.” In which I reported this:

Suffice to say, that ethics complaint was detailed to the max. It was chapter and verse what I suspected — that the transactional Mr. Schneiderman was unhappy he had not gotten the Trump campaign contributions he thought were his due. And so I ended the column this way:

The fix was in for Donald Trump.

And according to the Constitution of New York State?

That is malversation — cause for removal from office.

Well, finally, Governor Cuomo moved. Five years late, but he finally did something. Cuomo acted after a major assist from the New Yorker and reporters Jane Mayer and Ronan Farrow, the latter the journalist who uncovered the massive Harvey Weinstein story. Their story is remarkable in the detailed portrait of an abuser of women who was frequently so drunk he couldn’t stand up. The ultimate of empty vessels. Amazing. Yet, it must be said, so terribly predictable to me and certainly to President Trump. In fact, the future president had tweeted this in 2013: “Weiner is gone, Spitzer is gone — next will be lightweight A.G. Eric Schneiderman. Is he a crook? Wait and see, worse than Spitzer or Weiner”

As it happens, as I well recall, this tweet came a matter of days after I had spoken with Mr. Trump about this very subject. He was clearly of the view that Schneiderman was a crook and especially angry at the Attorney General for the slimy game being played with Ivanka, Jared, and his staff. And as is so often the case, Donald Trump was unerringly right.

Here we are five years later and there is this as written by Mayer and Farrow, writing about Michelle Manning Barish, one of the women who has come forward with her accusations. Bold print for emphasis is supplied:

Since the #MeToo movement began, Manning Barish has been active on social-media platforms, cheering on women who have spoken out, including those whose accusations prompted the resignation of the Minnesota senator Al Franken, a widely admired Democrat. Once, she made an oblique reference to Schneiderman on social media, in connection with a political issue. He called her and, in a tone that she describes as “nasty,” said, “Don’t ever write about me. You don’t want to do that.” Manning Barish says that she took his remarks as a threat, just as she took seriously a comment that he’d once made after she objected to him “yanking” her across a street. She recalls saying to him, “Jaywalking is against the law,” and him responding, “I am the law.” Manning Barish says, “If there is a sentence that sums him up, it’s that.”

In other words? In other words this was the pattern of Schneiderman’s transactional approach to his job as Attorney General. He was the law, and he would use the law to get what he wanted. What did he want from Donald Trump? Money — and if not enough money he would use Trump and the Trump family to get publicity by going after Trump with the powers of the New York Attorney General. What did he want with Ms. Manning Barish and the other women? Sex. And if they stood up to him — as did Donald Trump — they would be reminded by Schneiderman: “I am the law.”

This was a person seriously unfit for public office of any kind. He abused his office and the public trust just as he abused women.

The real question here? As with Harvey Weinstein, it simply isn’t possible that Schneiderman was conducting himself in this fashion and people did not know. In the Schneiderman case, Albany was Hollywood. The idea that Governor Cuomo, the leaders of the State Legislature, New York City Mayor de Blasio and others (where was the New York media???) were clueless about Schneiderman’s problems doesn’t even come close to passing the smell test. Cuomo is frequently mentioned as a possible candidate for president. If that comes to pass, the Schneiderman episode is surely going to cause him a problem of the “what did you know and when did you know it” variety.

Is this a tragedy for Eric Schneiderman the human being, and his family? Of course. He will spend one very long time dealing with this — possibly the rest of his life — with no small irony being that he will find out that no, actually, he is not the law.

In the world of cosmic justice? Eric Schneiderman may be going to jail.

And Donald Trump is President of the United States.

Jeffrey Lord
Follow Their Stories:
View More
Jeffrey Lord, a contributing editor to The American Spectator, is a former aide to Ronald Reagan and Jack Kemp. An author and former CNN commentator, he writes from Pennsylvania at jlpa1@aol.com. His new book, Swamp Wars: Donald Trump and The New American Populism vs. The Old Order, is now out from Bombardier Books.
Most Popular
1
The Right Prescription
Jan. 6: Seven Democrat Lies
by David Catron