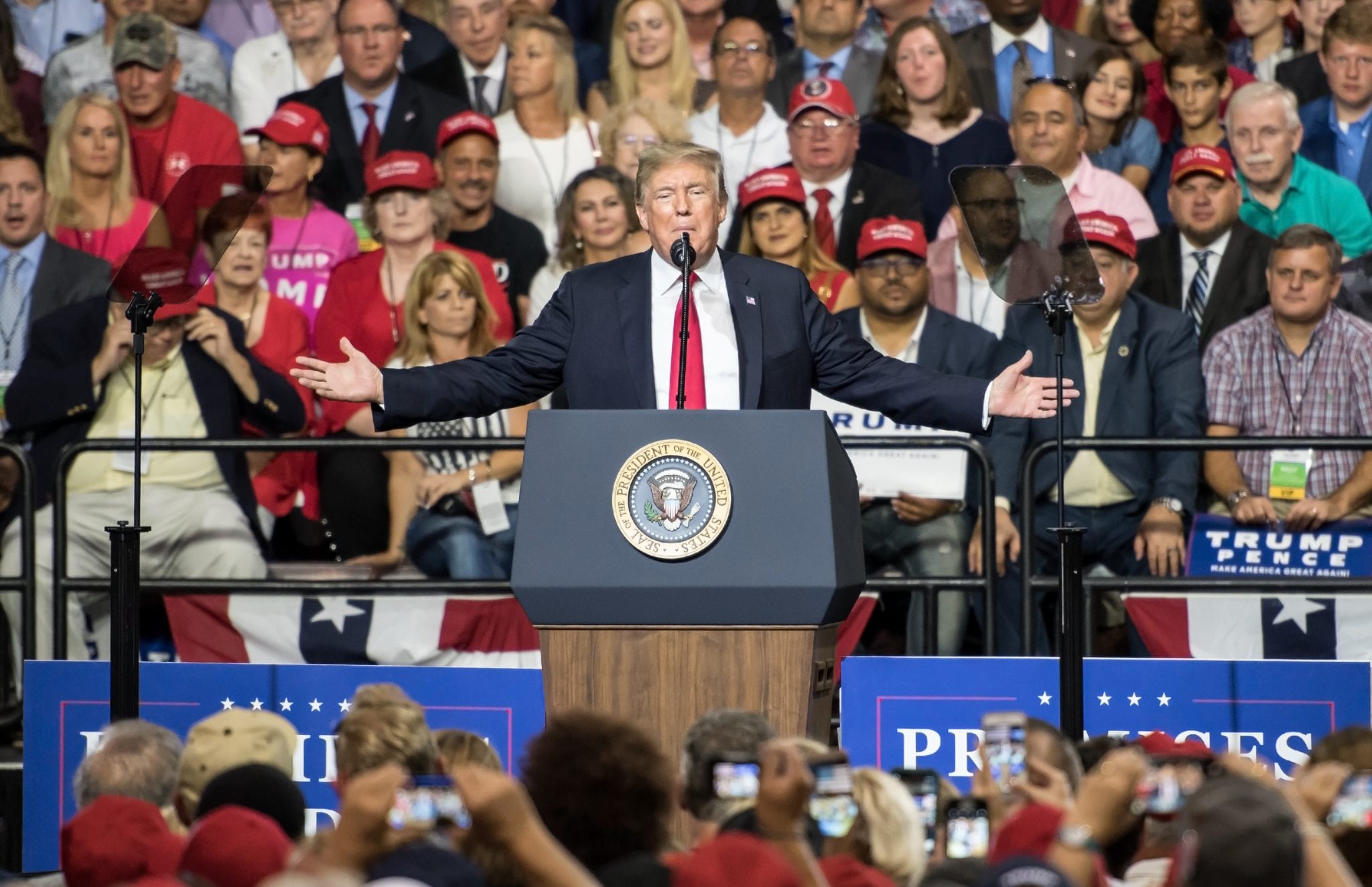 Emile Durkheim, a French sociologist, famously discussed something called collective effervescence. Durkheim argued that the universal religious dichotomy of sacrilegious and sacred results form the way in which we live of our lives. Unfortunately, most of us spend too many hours performing menial tasks. These tasks are, for lack of a better word, monotonous. The rare occasions on which the masses have a reason to congregate become sacred, and the high energy level associated with these events gets directed onto momentous events and people. Think religious gatherings, sporting events, or even Trump rallies.

To millions of Americans, President Trump is an outlier, an anomaly of sorts. His inflammatory Tweets and extemporaneous “speeches” are troubling, to say the very least. Trump, in the eyes of his detractors, is an atypical assemblage, an erratic unicorn “put together” by a disgruntled populace. To them, the septuagenarian is a jumped-up vulgarian with all the class of a seedy strip club.

To millions of others, however, Trump is a hero. His idiosyncrasies aren’t so much a departure from societal norms as they are a reflection of a new style of governance. In the age of performative politics, Trump is king.

His ability to speak in an “unfiltered” manner is as mind-boggling as it is unique. And in a perverse way, this is his strength.

For many of his supporters, Trump is a deity of sorts. He is a symbol of something that transcends the individual. Of course, one could argue that being POTUS automatically offers one a transcendent role. But with Trump it’s different. Durkheim used the word “force” to describe the object or individual that becomes the symbol of the group. For ancient and medieval people, collective effervescence — coming together as a group – was an evolutionary survival tool. There was strength in numbers; to turn your back on the group was to turn your back on existence.

Today, people living in democratic societies have far fewer restrictions, which results in people with different lifestyles and worldviews inhabiting the same geographic area. This means collective effervescence has a tendency to become less frequent over time. But this also means that we put increasing importance on the things that inspire that feeling of transcendence. Love him or loathe him, Trump inspires this feeling in millions of Americans. In this age of polarization and isolation, Trump possesses an uncanny ability to unite masses across the land. This is just one of the many reasons why the septuagenarian will win re-election in 2020.

Well, let me be of assistance. Donald Trump is not an anomaly. Donald Trump is a creature of his time, of our time. Carl Jung once said that, “until you make the unconscious conscious, it will direct your life and you will call it fate.” Well, until those on the left realize that Trump is not an anomaly but a reflection of the United States as a nation, they will remain in a perpetual state of blindness and ignorance. Trump’s election was a historical moment, not a historical anomaly.

The Leaning Tower of Lefties

Lacking even the slightest degree of substance, the left has become a party of condescension and clichés; the right, spearheaded by Trump, appears to tap into something real, something primal. People want leaders, not pandering prima-donnas.

In the latest Gallup numbers, Trump is at 46% approval. This is the highest mark he has reached in more than two years in office. Politically speaking, if you lean to the right, this is very good news.

What explains Trump’s mounting trajectory? Well according to Chris Cillizza, a political commentator for CNN: Trump’s popularity, or semi-popularity, can be explained by “a series of good economic numbers — led by 3.2% GDP growth in the first quarter of 2019. (Worth noting: The Gallup poll was out of the field by April 30, meaning that the gangbusters April jobs report isn’t even factored into Trump’s numbers.)”

But, as Cillizza points out, things get even more interesting when we dig into the numbers: “Trump’s gains of late are not, as you might expect, from Republicans. Nine out of 10 Republicans backed Trump in March, the same number who did so in April. It’s among Democrats where Trump’s job approval has improved the most month-to-month; just 4% approved of the job he was doing in March compared to 10% who said the same in April. Independents went from 33% job approval for Trump in March to 39% in April.” (Emphasis added.) Remember, readers, this is taken from Trump-bashing CNN.

Trump’s popularity shouldn’t surprise us. After all, at the 500 days mark, Trump was the second most popular U.S. president among his own constituency (87% support), only topped by President George W. Bush (96% support). (It’s important to note that Bush was at that time profiting, politically speaking, from the 9/11 terrorist attacks.)

As we all know by now, Trump’s base is extremely loyal. They will stick with him no matter what, as is reflected in the aforementioned poll.

What about the left’s base? Does the left even have a base? I would argue not. It has become some sort of amorphous entity built on a platform of virtue signaling and vague promises. Has the left ever been more divided? Which one of the 974 candidates packed into the Democrats clown car can unite the left?

Beto? No! Elizabeth Warren? No! Bernie? No! Biden? Possibly… but can Biden beat Trump? No! Pete Buttigieg? Again, possibly. The mayor of South Bend oozes decency. He is certainly a worthy candidate. Intelligent and articulate, this is a man who taught himself Norwegian while sitting on the toilet (yes, really!). Nevertheless, lavatorial linguistics aside, Buttigieg lacks experience. Being able to speak Norwegian fluently is not a presidential prerequisite.

Americans like a gamble, but a vast number are not willing to “bet everything on red.” Can you really see Americans voting a 30-something-year-old into the most important position in world politics? Not a chance. Why roll the dice on what could be, economically and politically speaking, a very expensive failure?

So, with all this being said, who can beat Trump?

Bill Maher appears to have the answer. The outspoken comedian thinks Oprah should run. On Friday, May 3, during an episode of Real Time, Maher had this to say:

“I don’t even like Oprah that much, but she could run… Trump won ’cause he was a TV star. Kneel before Zod, TV is Zod. That’s what gets to people. They saw him as the Apprentice guy. Oprah, she doesn’t scare a lot of people who otherwise would be scared. She’s much more popular than Hillary. She would certainly get the African-American vote to come out, that’s important to the Democrats. I’m telling you, I don’t think she wants to do it, but she could win.”

Maher’s view emphasizes the point I made earlier, folks.

We have entered a new era of politics. This is new terrain. We have never been here before. Trump is excelling because his opponents don’t have any answers; they have never “played” this game before. Could Oprah beat Trump? Who knows, maybe she could. Back in 2017, Winfrey spoke with financier David Rubenstein for an interview for his Bloomberg Television show. She hinted at the idea of running in 2020. The reception? Lukewarm, at best. Does America need someone to “host” the country? No, the country needs a leader. Whether or not Oprah can beat Trump is beside the point; the very fact the left could end up looking to Oprah as some sort of “Hail Mary pass” tells you everything you need to know about the Democrats. This is a party in absolute disarray, and that is why Trump will be re-elected in 2020.