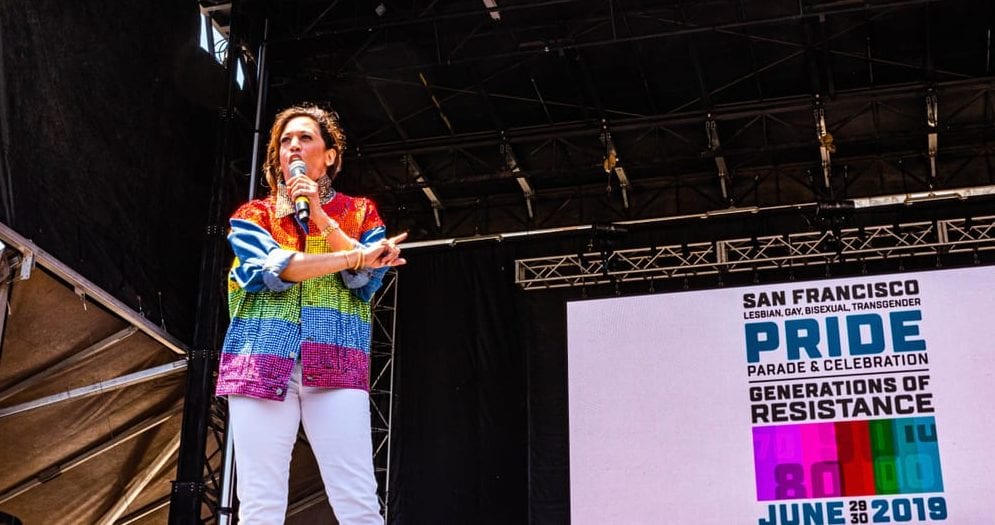 If Hillary Clinton has a political daughter, she’s Kamala Harris. Smart enough intellectually, both women bumble politically and often look like what they are — expedient, power-hungry vipers intent on ruling their lessers at all costs. So it was this weekend, when Kamala chortled along with one of her rally commenters who called the president “mentally retarded.” Kamala responded, “Well said. Well said.”

Kamala Harris then went on to deny the situation and said she hadn’t heard the man, which was absurd. Lying, ham-fisted, entitled. When Kamala Harris is questioned, she responds haughtily. How dare anyone question her?

But that’s another story. The most interesting part of the exchange was the audience response. Rather than shocked umbrage at the horribly offensive language against disabled people, the audience laughed. They laughed a lot. There were no “boo”s. No one cried out in horror. They laughed uproariously and agreed with the speaker’s assessment of the president’s mental faculties.

Further, no intrepid reporter went to the ableist man’s house to confront him on his clear bigotry. No one doxxed his family. At this writing, the man still has a job. His friends and family can live, work, and congregate in peace. In short, there have been precisely zero consequences for this prejudiced, evil man’s actions.

All those who laughed along with him are complicit in the bigotry. Has Kamala Harris been called on to condemn this man’s behavior? Has she apologized not only for her own rank ableism but that of her uncouth deplorable audience?

No? So many inconsistencies.

There are two sets of rules. In one set, anyone to the right of Bernie Sanders must use a prim and proper language and prove a negative: every day, they must reaffirm that they are not racist, not sexist, not homophobic, not ableist bigots. They must use precise language lest they be accused of all the above and worse. Better yet, they should just be quiet. No “Jesus” talk. No discussion of touchy subjects like racism, slavery, the environment — but let all leftists speak as they wish. Anyone who disagrees can kindly shut up.

Put me in the camp of not caring if someone uses the term “mentally retarded.” Oh, spare me the umbrage. I have a child with retarded mental development. And while making fun of stupid people by using the term isn’t nice, it’s descriptive. Speaking freely is more important than avoiding insult even when someone is being insulted.

As the popularity of Dave Chappelle’s new special, Sticks & Stones, proves, most Americans appreciate honesty and humor over fake outrage for political power.

Kamala Harris loves that power. She regularly uses the power of her position as a woman of color to put others back on their heels. Her buddy Jussie Smollett, or, as Chappelle calls him, Juicy Smolier, knows the power of impugning every white person with a faked attack on his blackness and gayness. It didn’t happen. But he knew how easily manipulated the media is and how the story would permeate the news cycle. Had he not been caught (laughable, considering the ridiculous spun yarn), the lie would stand and people wearing red MAGA hats would be viewed as even bigger villains.

When a progressive controls the words and the narrative — “Ha! Ha! The president is mentally retarded!,” the progressives laugh. Kamala laughed. They laugh, like other Americans might laugh at Kamala Harris’ being mentally, and certainly politically, deficient, but those people don’t receive the benefit of the doubt. Their bigotry and prejudice is accepted as fact.

This nonsense needs to stop. Should Kamala Harris be excoriated for her handling of the offensive language? By the current rules, yes. Their rules. Her rules. Progressives never pay any penalty for this sort of thing, though. The news cycle is dead, her violation forgotten.

What would be better, and unifying, for all people would be to stop the pretense. The language people use with their friends is freer and probably more coarse. And it is fine. Friends share inside jokes. They can be bawdy and inappropriate and they jest in love and it’s fine. Meanwhile the social justice warriors spend time being offended and miserable.

Americans are far more unified across racial, gender, intellectual, and other identities than the social justice warriors would have everyone believe. That’s the big secret. It wasn’t just conservatives who enjoyed Dave Chappelle’s humor. It was everyone.

Americans have long since unified across their differences. They have friends and neighbors who disagree politically. They laugh.

Progressives want to control and dominate and define and separate. They want to condemn and punish — unless it’s one of their own. So Kamala Harris and her rally supporters are safe and secure. They know that the rules they wish to impose on their ideological enemies won’t be used against them.

Kamala Harris and her audience can laugh, and they do. It’s time everyone else gets to play by the same rules.