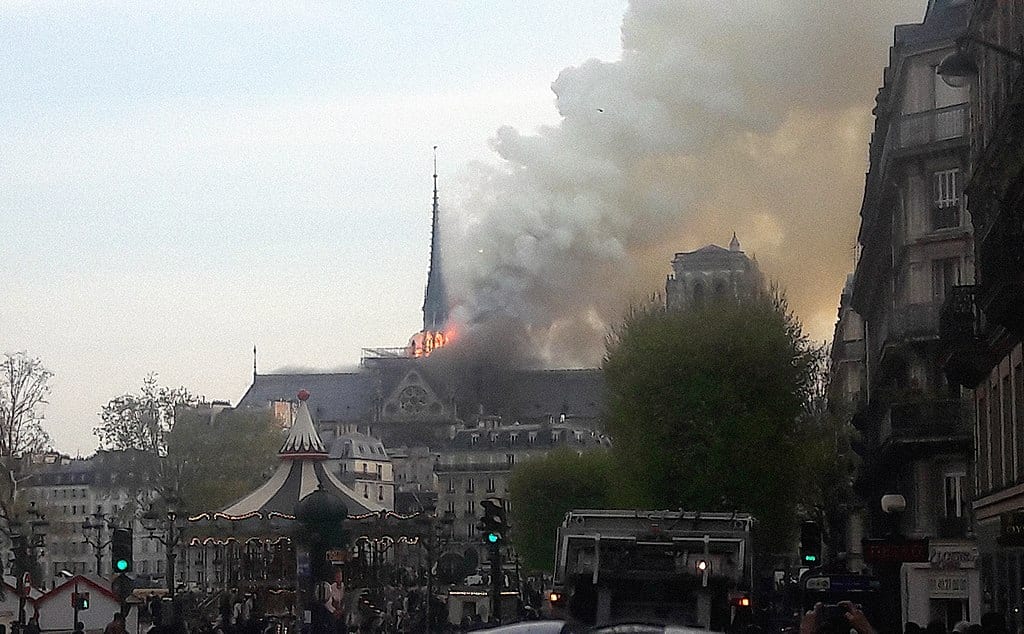 When you heard Notre Dame was ablaze, did you think Islamic terrorism might be involved? I did. And with the origin of the fire still uncertain, that remains a valid avenue of inquiry. Muslim extremists have attacked the landmark before, have threatened to attack it again, and are now gloating over the destruction of this symbol of Christendom. It may well be that the fire was an accident — let’s hope so — but no thoughtful investigator would rule out the possibility of arson with this religious motivation. It’s not like attacks on national symbols are contrary to the rules by which Islamic terrorists have played. Has the whole world forgotten 9-11?

But don’t mention any of this to the Washington Post. In a column titled “How the far right spread politically convenient lies about the Notre Dame fire,” columnist Talia Lavin, leaning heavily on BuzzFeed as if it were one of Notre Dame’s flying buttresses, finds the mere suggestion that Islam might have played a role in the fire nothing short of racism. (Note to the WP: Islam is a religion, not a race.) Lavin is right to condemn genuine racists or those who have attributed the cause of the blaze to Muslim extremists without any proof to support that claim. Insofar as she does this, Ms. Lavin is correct. But she goes well beyond her stated thesis.

In a bit of journalistic sleight-of-hand that is so characteristic of the Left, she uses outrageous tweets by racist Richard Spencer and claims published by the conspiracy theorist website InfoWars to de-legitimize any thoughtful critique of Islam. She goes on to dismiss the idea of a “civilizational conflict” between Islam and the West and, in an ignorant jab, criticizes conservative commentator Ben Shapiro for calling Notre Dame “a monument to Western Civilization and to Judeo-Christian heritage.”

At this point, I had to ask how this article got past the Washington Post editors. There is a civilizational conflict, and while things might seem rosy in Ms. Lavin’s Brooklyn — aren’t the Twin Towers visible from there? — I assure you that things look much different in other parts of the world. I have debated Muslims on Al Jazeera, CNN International, in London’s Hyde Park, and I have covered that conflict in Nigeria where Christians are being slaughtered by Muslims for their faith. Yes, the conflict is real. Ms. Lavin and her publisher would do well to remember — if they ever knew it — that Islam is a religion founded in violence, with a history of violence, and with many representatives who advocate violence. To wit: according to 2015 BBC poll, 25 percent of British Muslims — roughly 750,000 people — were sympathetic with the Charlie Hebdo attacks.

As for Notre Dame being “a monument to Western Civilization and to Judeo-Christian heritage.” Uh, it is, Ms. Lavin.

Recently, I visited the sites of the Charlie Hebdo and Bataclan terrorist attacks in Paris. It was my third visit to these places in the last year. Somehow, whenever I am in Paris, I feel that I should pay my respects to the victims of Islamic terrorism who seem to have been so thoroughly forgotten. No, that is not quite accurate. They have not been forgotten. The reason for their murders has been deliberately obscured and legitimate dialogue on the topic of Islam has been suppressed. This is no conspiracy theory, it is codified in EU law. According to the European Court of Human Rights, disparaging “The Prophet” Muhammad is punishable by fine, imprisonment, or both.

And this brings me to the point — the real point — of Ms. Lavin’s column: the suppression of free speech. She would have us believe the Notre Dame fire is, in effect, akin to the Reichstag fire of 1933. In that instance, the Nazis used the fire, which they likely set, as a pretext to persecute their political opponents and, most of all, German Jews. It was Jussie Smollett on a national scale, but with a different demographic in mind. Ms. Lavin sees the “far right” using the tragedy of Notre Dame to persecute Muslims. She ends her column with talk of “misinformation” and “conspiracy” raging “through our information sphere unchecked.” Then she says this: “It is past time that those who stoke inflammatory rhetoric, knowing its potential to catalyze racist violence, were made to stop playing with fire  —  before it’s too late to control the inferno.”

That misinformation rages through our “information sphere” is not in question. What is troublesome is that Ms. Lavin and the Washington Post, like all would-be censors, do not see themselves as occasional contributors to that misinformation but instead see themselves as arbiters of truth, the high priests so to speak, who will determine for the rest of us what we should or should not have access to. In the end, they are guilty of the very thing they condemn — they have leveraged a tragedy for political capital against their opponents.