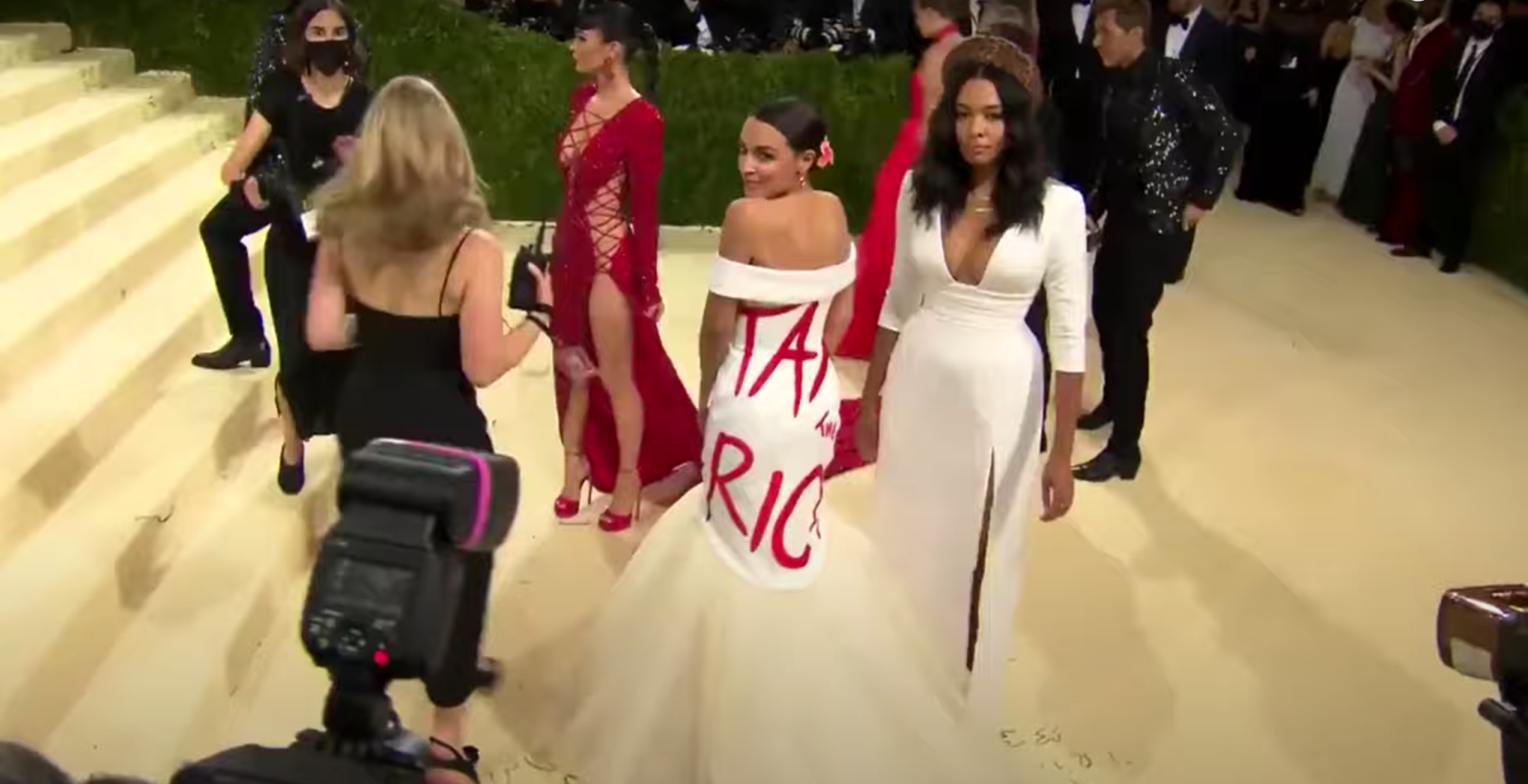 This girl has saved the Left and doesn’t know it. The criticism is unfounded. We spend our lives asking politicians to tell the truth, not to try to pretend to be what they are not. And this week, finally, it happened with Ocasio-Cortez. With her, the United States has given birth to the world’s first left-wing politician to openly show herself to be the shameless hack she really is. This girl is worth J.B. Pritzker’s weight in gold.

Going to a fancy gala, with tickets at $35,000, surrounding yourself with all your millionaire friends, and wearing an expensive dress with the message “Tax the Rich” is just masterful. I haven’t seen anything more explosive since the last time I tried to light a cigarette next to a gas leak. And I can’t recall a single politician in all of history who has laughed so hard in the face of their constituents as she has, with only a little help from her dress. Thank you, Alexandria — long live imposture!

Ocasio-Cortez is not exactly an intellectual. I mean, she’s smart enough to memorize a three-word slogan (four, with difficulty and the help of amphetamines) and walk without tripping on the hem of her dress. The same could not be said of Joe Biden. So, we do not expect long speeches full of bullshit from her as if she were, I don’t know, Krugman. From Ocasio-Cortez, the most we can expect is the same thing a parrot does if you give it enough time and peanuts.

She knows it. That is why she has discovered her salvation: dress politics. It is a step further in the political technique of the protest T-shirt, which Michael Moore made fashionable in his day, deforming the message so much that it was impossible to read what he wore on his belly, but whatever, it was some nonsense about the war in Iraq, global cooling, or global warming. In Moore’s case, it did not work for aesthetic reasons, but with Ocasio-Cortez, it is different and will be studied tomorrow in the criminology handbooks.

She looks beautiful in the Met Gala photos, they tell me. I have not been able to see her, because in the image that has transcended, no matter how hard I look, again and again, my degenerate, masculine nature finds my eyes glued to the immense cleavage that the other woman in the white dress is showing. But hey, I guess she’s out there somewhere, disguised as a banner. Nevertheless, I’m convinced that this is just the beginning.

So, after mulling it over with my eco-pillow, I’ve made a decision. I have something to tell you, Alexandria: I want to be your designer. I already have several models in mind. Take note because I will launch you so far into universal stardom that we may have to enlist the help of NASA to bring you back down to earth; should such a thing actually be a national priority. Take a look at what I have for you:

I know that you are concerned and urgently need to visit Kabul to demand that the Islamists respect the rights and dignity of women. For that special day, I have prepared a very elegant burqa for you, as black as the future of the Democratic Party, which says “Embrace a Taliban.”

For the Climate Summit, you will be wearing jeans, with a T-shirt that I have made by sewing together 13,000 weeping willow leaves and the skin of several endangered animals, and which will include the message: “It took 7,000 liters of water to make these jeans. Let alone the T-shirt. Enough is enough!” If the “Enough is enough!” text doesn’t fit, it can be written on your forehead.

For the next techno-jamboree that Zuckerberg and Dorsey host, I’m working on a holographic dress that lets the message scroll up and down like you’re a billboard. It will say: “Mark, Jack: thank you for bringing us freedom of speech” in big print, and below in tiny print: “*chill guys, the message is connected to my cell phone, I can delete it if you don’t like it.”

For your next goodwill trip to some starving African country, I have prepared a dress made of lobsters and crabs. It carries a text written with pearls of caviar that says: “Say ‘No’ to the macho stereotypes that force black women to do the Dukan diet.”

And finally, for your next presidential gala at the White House, I give you an exclusive model, which is my favorite: it’s black, engraved with 13,000 hand-painted watches and adorned with a big back-lit sign that reads “Remember to take your pill, Joe.”

If you like my ideas, Alexandria, we can have dinner tonight and discuss my fee. I know a restaurant where they serve the world’s most rich, sliced and marinated in soy sauce.