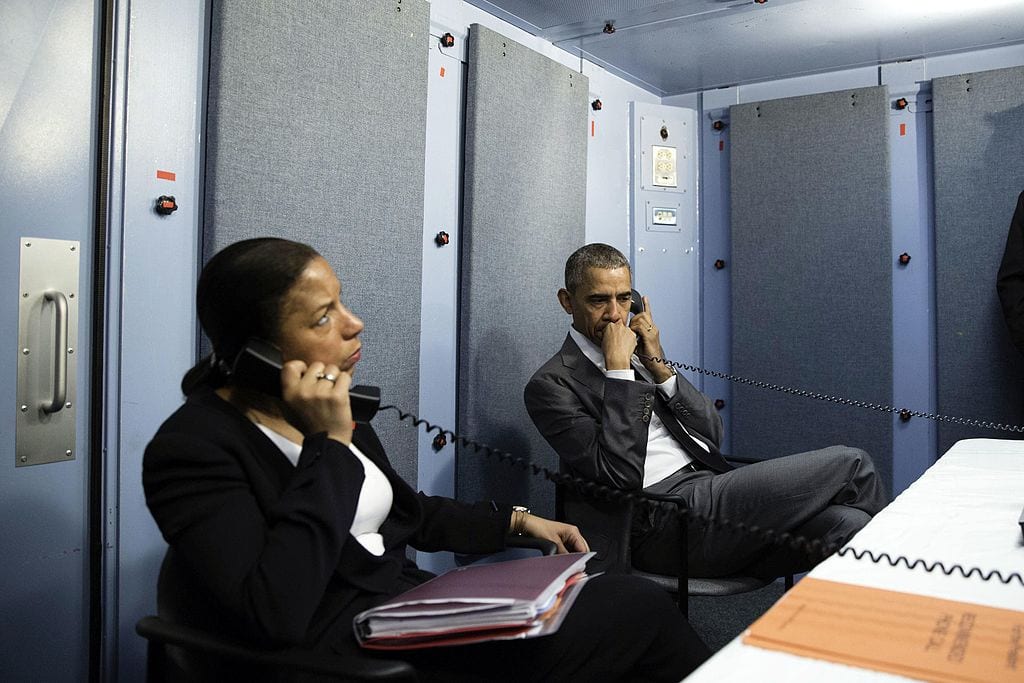 Since Watergate, the Washington wisdom has always held that it’s not the crime, it’s the coverup that sinks a politician. But that’s only the case when the coverup fails.

But what if the coverup succeeds?

It’s horribly simple. The crimes are never uncovered and the perpetrators are never brought to justice no matter how serious their crimes may be. That is precisely what has happened because of the FBI and Justice Department’s coverup of their abuses of power and illegal actions during the 2016 election.

In this case, the FBI and the Justice Department have succeeded in the most significant coverup in American political history. The abuses of power and crimes they have succeeded in covering up are not only against the law: they are crimes against our system of law and government. They were perpetrated by employees of the government, under color of law, with the intention of affecting the outcome of an election.

For almost two years an investigation into the abuses of power — and probable crimes — committed by the FBI and Justice Department during the election has been conducted by House Permanent Select Committee on Intelligence chairman Devin Nunes (R-Cal).  Rep. Bob Goodlatte — chairman of the Judiciary Committee — and Trey Gowdy — chairman of the Oversight and government reform committee — tried to investigate other aspects of the FBI and DoJ actions.

These investigations have been stonewalled by the refusal of the FBI and Justice Department to produce the documents and provide access to witnesses that would, in all likelihood, prove that the major abuses of power and crimes had been committed.

Nunes, Goodlatte, and Gowdy had effectively split their inquiries: Nunes investigating possible crimes and abuses of power under the Foreign Intelligence Surveillance Act and Goodlatte and Gowdy jointly investigating the FBI’s mishandling and improper actions in its investigation into Hillary Clinton’s use of a private, insecure email system for conversations with her staff — and Obama — on top secret information, including special access programs and satellite intelligence.

If this is the first you’ve heard of the 28 December letter, that’s because it’s been studiously ignored by the media.

The key facts revealed by the Nunes memo were:

(1) that the FBI used, as the factual basis for the Foreign Intelligence Act Surveillance Court warrant applications, information from the Steele dossier, a compilation of anti-Trump information that the FBI had not verified. The FBI nevertheless swore to the truth of that information to obtain surveillance warrants on Carter Page, a one-time Trump campaign advisor; and

(2) that in the process of obtaining the search warrants the FBI failed to inform the Foreign Intelligence Surveillance Court that the Steele dossier was bought and paid for by the Democratic National Committee and the Hillary Clinton presidential campaign.

As I wrote at the time of the memo’s release, and on several occasions since, the Nunes memo showed that the actions of the FBI and Justice Department, sometimes in conjunction with the Obama White House, were worse than Watergate.

The Nunes investigation is over, but myriad questions remain. Among them:

Most, if not all, of that information could be gleaned from documents and testimony the FBI and DoJ have withheld from congressional investigators.

The latest, and almost certainly last, effort to expose the facts of this scandal are contained in the Goodlatte-Gowdy letter. They are the last exposé because the Democrats have stopped these investigations cold. There will be no more hearings, no more testimony, and no further attempts to get the documents and testimony from the FBI and Justice Department that have been withheld.

The Goodlatte-Gowdy letter is as revealing as was the Nunes memo. The two outgoing committee chairmen chose to focus on the importance of decisions made and not made by the FBI and DoJ, the bias of some agents and attorneys involved, and the evidently disparate treatment of the Clinton email investigation and the counter-intelligence investigation of the Trump campaign.

Under 18 US Code Section 793(f) it is a felony to handle classified information in a “grossly negligent” manner. The Goodlatte-Gowdy letter flatly says that the FBI and DoJ read elements into the “gross negligence” law that do not exist. In then-FBI director James Comey’s 5 July 2016 televised statement exonerating Clinton, the FBI read into the law a higher level of scienter — intent and knowledge of the unlawfulness of conduct — than the law required.

Moreover, the letter says, there is little or no evidence investigators made any effort to identify evidence that could have satisfied the FBI-devised scienter element that is not in the law.

We should remember Comey’s televised statement in which he said that “no reasonable prosecutor” would have brought a case against Clinton under the gross negligence law. He also said that the decision not to do so was unanimous among those involved.

That was one of Comey’s biggest lies. As the Goodlatte-Gowdy letter points out, FBI General Counsel James Baker told them that he did believe a case could be made and the recommendation not to charge Clinton wasn’t unanimous.

Goodlatte and Gowdy point out that Comey’s exoneration memo was drafted before all of the relevant witnesses had been interviewed. What they fail to mention is that the FBI and DoJ were handing out immunity from prosecution agreements to Clinton staffers as freely as if the agreements were Halloween candy.

Immunity agreements are given to key witnesses in criminal investigations for a price: their testimony against a target of the investigation which could not otherwise be obtained. There is no evidence whatsoever that any of the witnesses involved — Clinton staffers such as Cheryl Mills, her chief of staff at the State Department — gave any evidence that justified the immunity agreements.

The Goodlatte-Gowdy letter also points out that the Comey exoneration memo was changed before it was issued, but fails to specify the biggest change. Originally a part of the memo said that Clinton and her staff handled classified information in a “grossly negligent” manner. Comey changed that to read “extremely careless,” clearly to prevent the law from being applied. The only difference between the two phrases is that one appears in the statute and one doesn’t, but Comey nevertheless stated that there was no prosecutable case.

Comey also, according to the letter, overlooked evidence that foreign actors had accessed Clinton’s emails, and probably those of her staffers, including at least one containing “Secret” information. That information, too, was excised from Comey’s draft exoneration memo for the purpose of helping Clinton.

The only conclusion possible — which Goodlatte and Gowdy do not state — is that Comey’s FBI intentionally gave Clinton a pass when they should have recommended to the Justice Department that she be prosecuted.

Comey is not the only malfeasant named in the Goodlatte-Gowdy letter. The other is former FBI agent Peter Strzok, he of the thousands of text messages sent to or received from his lover, FBI lawyer Lisa Page, that showed he — and she and others in the FBI — weren’t only biased against Trump, but had an abiding hatred of him.

Strzok’s central role in the Clinton and Trump investigations probably ended in 2017 when Special Counsel Robert Mueller removed him from the Mueller team. Before that, as the letter says, Strzok:

Strzok was finally fired from the FBI in August 2018. We — including Nunes, Goodlatte and Gowdy — don’t know whether he was involved in the investigation of the Trump campaign after Mueller removed him in 2017.

Comey’s appearances in congressional hearings have yielded nothing of value because he has been instructed by FBI lawyers not to answer any of the critical questions.

Another possible malfeasant, Deputy Attorney General Rod Rosenstein, has been equally protected. As the Goodlatte-Gowdy letter explains, former FBI general counsel James Baker testified that after Trump fired Comey there were discussions among FBI staff about Trump’s fitness for office and invoking the 25th Amendment to remove Trump.

The only avenue that was left to find the truth was for President Trump to have ordered the documents declassified and provided to Congress. But he never acted and now the investigations are closed. The Senate won’t reopen them, nor will acting AG Whitaker or IG Horowitz. The only hope resides in U.S. Attorney for Utah John Huber, an Obama appointee, who then-AG Jeff Sessions tasked to investigate FBI misconduct in the election. Those who place their hopes in Huber will be disappointed.

The stain on our system of justice and the 2016 election created by the abuses of power and probable crimes committed by FBI and DoJ officials during and after the 2016 presidential campaign will not be erased. Their coverup has succeeded.