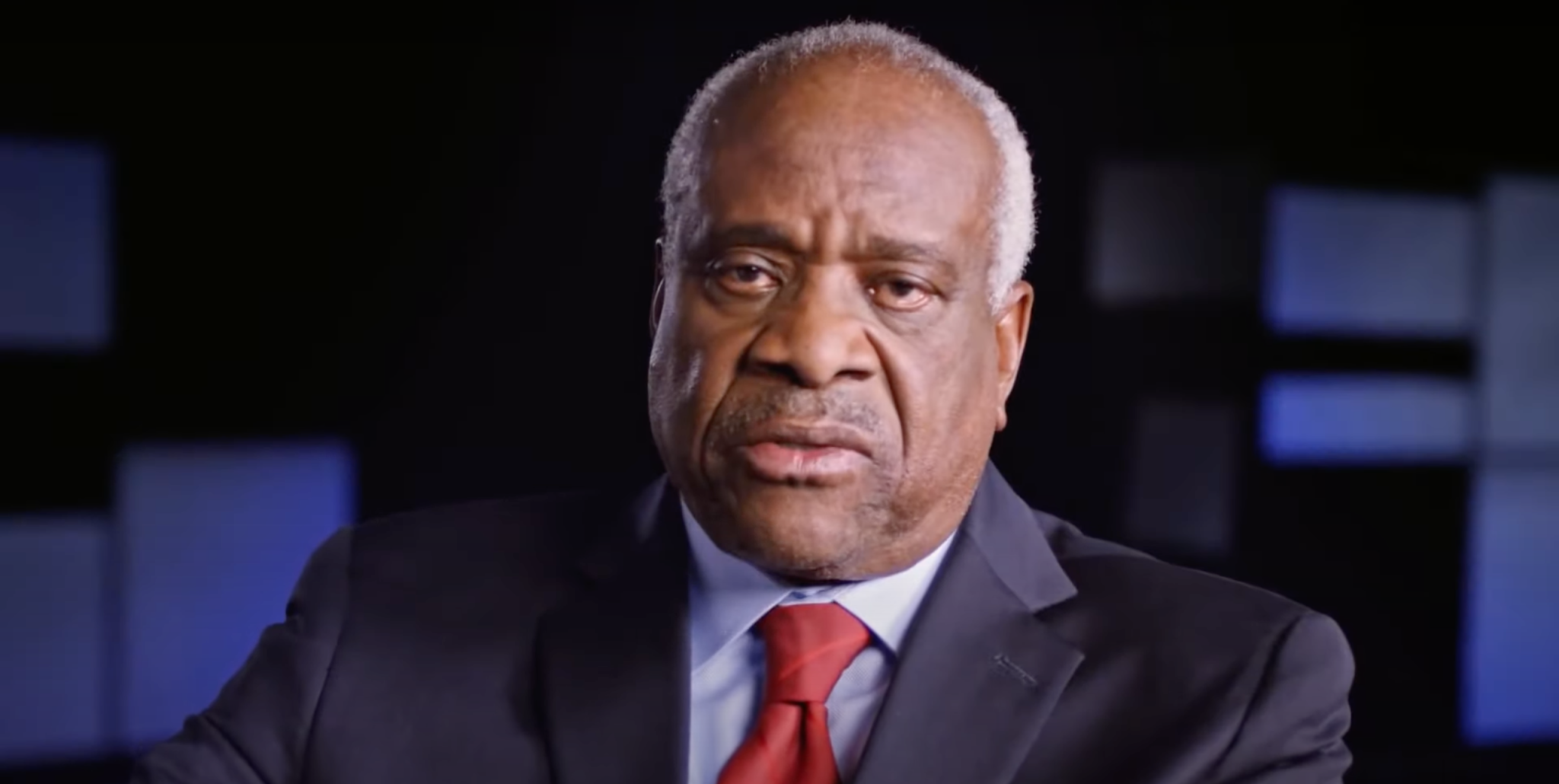 Imagine that! A political activist married to a prominent government official! Ohhhh the humanity!

Mrs. Thomas has been smacked by the liberal media because she had the nerve — the nerve! — to text Trump White House Chief of Staff Mark Meadows in the aftermath of the November 2020 election. She called the election “the greatest Heist of our History” and said lawyer Sidney Powell should be “the lead and the face” of Trump’s legal team. News reports have the police state-style Jan. 6 Committee possibly issuing a subpoena for her to appear. (No plans, though, to subpoena Speaker Nancy Pelosi or committee member Rep. Jamie Raskin, both of whom had responsibilities for the security of the Capitol building.)

Now the New York Times headlined this of Ginni Thomas:

In the aftermath of the 2020 presidential election, the wife of Justice Clarence Thomas was involved in a range of efforts to keep President Donald J. Trump in power.

The Times story said this:

A hard-line conservative activist, Ms. Thomas had long been viewed with suspicion by the Republican establishment. Yet her influence had risen during the Trump administration, especially after Mr. Meadows, who like Ms. Thomas has roots in the Tea Party movement, became chief of staff. Now, an examination of her texts, woven together with recent revelations of the depth of her efforts to overturn the election, shows how firmly she was embedded in the conspiratorial fringe of right-wing politics, even as that fringe was drawing ever closer to the center of Republican power.

The disclosures add urgency to questions about how Ms. Thomas may have leveraged her marriage to Justice Thomas, who would be ruling on elections cases throughout the battle over the 2020 vote and beyond. As his wife agitated for Mr. Trump and his aides to turn aside the election results, Justice Thomas was Mr. Trump’s staunchest ally on the Supreme Court and has remained so. This year, in January, he was the only justice who noted a dissent when the court allowed the release of records from the Trump White House related to the Jan. 6 attack.

Note: The call from Sen. Wyden for Justice Thomas to recuse himself from “any case related to the Jan. 6 investigation” is utterly typical of Washington hypocrisy. Take a look at this 2021 story by the New York Post on Wyden.

US Sen. Ron Wyden boosts chipmakers while his wife buys their shares

This gem of a story says that Wyden has pushed legislation that directly benefits his wife, who owns considerable shares of stock in the very semiconductor chip industry his legislation would benefit.

And this guy has the nerve to lecture Justice and Mrs. Thomas? What a joke.

Allow me to translate the rest of the Times article.

The New York Times is a hardline, far-left newspaper. It cannot abide conservatives, and most particularly it cannot abide a black man who is not a similarly inclined hardline leftist. Justice Thomas long ago walked off the liberal plantation and has the audacity to think for himself. The Times hates him for it and always has.

And note the line that “…Ms. Thomas had long been viewed with suspicion by the Republican establishment.” You don’t say! The same RINO wing of the GOP that hated Ronald Reagan in the day — and Donald Trump now — hates Ginni Thomas, too.

The hard fact here is that as with any other activist of any stripe, one can agree or disagree with his or her position on X. But to smear them and try to intimidate them into silence in order to rig a Supreme Court decision is not simply wrong but decidedly un-American. I don’t agree with the New York Times — but I don’t want it shut down. I want the paper to have the same right as Ginni Thomas — to speak freely. And I want every liberal member of the Court to vote as they see fit.

Which makes the Times attack — and the attacks of others — on Ginni Thomas so sinister. From their far-left perspective, what better way to target Justice Thomas than by attacking his wife?

As the Wall Street Journal has correctly noted of the recent Bob Woodward attack on Ginni Thomas in the Washington Post that featured — but of course — her leaked texts, timing is all. Wrote the WSJ:

The leak’s timing suggests another purpose is to damage Justice Thomas as the Supreme Court is preparing to hand down major decisions on gun and abortion rights. And sure enough, the served-up Woodward scoop was followed by demands that Justice Thomas resign, or at least recuse himself from cases involving the election.

Last month, as the attacks on the Thomases spilled out of the sewer, former Reagan Attorney General Ed Meese and former Ohio Secretary of State Ken Blackwell zeroed in on just why the recent influx of hate targeting Justice and Mrs. Thomas. They said this:

The militant Left is attacking the principled public service of Justice Clarence Thomas again, this time by targeting his wife Ginni in a malicious attempt to delegitimize Supreme Court decisions that are faithful to the original meaning of the Constitution.

Bingo. These kind of attacks on Justice Thomas and his wife began from the instant his nomination to the Court was announced — in 1991. That would be a full 31 years of this kind of garbage the Thomases have had to endure. Which, God bless, they have done with grace, patience, humility, and a very large helping of old-fashioned patriotism.

To underline how this game of target-the-conservative-activist-wife-of-a-justice is played, let’s recall how another New York Times story reported about a liberal activist wife of another government official — a liberal himself — was played. The story appeared in February of 1993 and was headlined:

The story reported — lovingly — this:

Breaking decades of tradition, Hillary Rodham Clinton will set up shop in the West Wing of the White House, alongside the President’s senior staff members, where she will help formulate policy on health care and other domestic issues, White House officials said today.

First Ladies have customarily operated from the East Wing of the White House, with their official contributions limited to social duties or charitable causes.

…Dee Dee Myers, Mr. Clinton’s press secretary, said the First Lady would have an office in the West Wing. Asked why, Ms. Myers said: “Because the President wanted her to be there to work. She’ll be working on a variety of domestic policy issues. She’ll be there with other domestic policy advisers.”

Mrs. Clinton was right behind her husband when he made his first appearance in the Oval Office today, between sessions of greeting the public together on their first full day in the White House.

And in the first sign of Mrs. Clinton’s role as a policy maker in the new Administration, White House officials said today that she would supervise the drafting of a proposal to revamp the nation’s health-care system.

Not only was presidential spouse Hillary Clinton, like Supreme Court spouse Ginni Thomas, a political activist. No. She was far more than an activist like Ginni Thomas.

…set up shop in the West Wing of the White House, alongside the President’s senior staff members, where she will help formulate policy on health care and other domestic issues…

Got that? The liberal activist spouse of the president of the United States was given her own office in the West Wing so she could  “help formulate policy on health care and other domestic issues.”

And the reaction of the Times and other liberals of the day? To swoon. To compliment her. To, dare I say, treasure her activism inside the government.

Let’s be crystal clear. Unlike Hillary Clinton, as stated clearly by Meese and Blackwell, Ginni Thomas…

…does not touch the courtroom arena. No matter how strongly she feels about a matter, she steps back if it moves toward litigation, even before it reaches the Supreme Court.

Which is to say, Ginni Thomas doesn’t have her own office in the Court, holds zero official role, and if some situation out there on the political horizon heads in the Court’s direction, she “steps back” from it.

The bottom line in the smearing of Ginni Thomas? It is to intimidate her — and her husband — into silence. And in the case of Justice Thomas, to force him into a particular decision by smearing his wife.

And should never happen.

And shame on their critics.