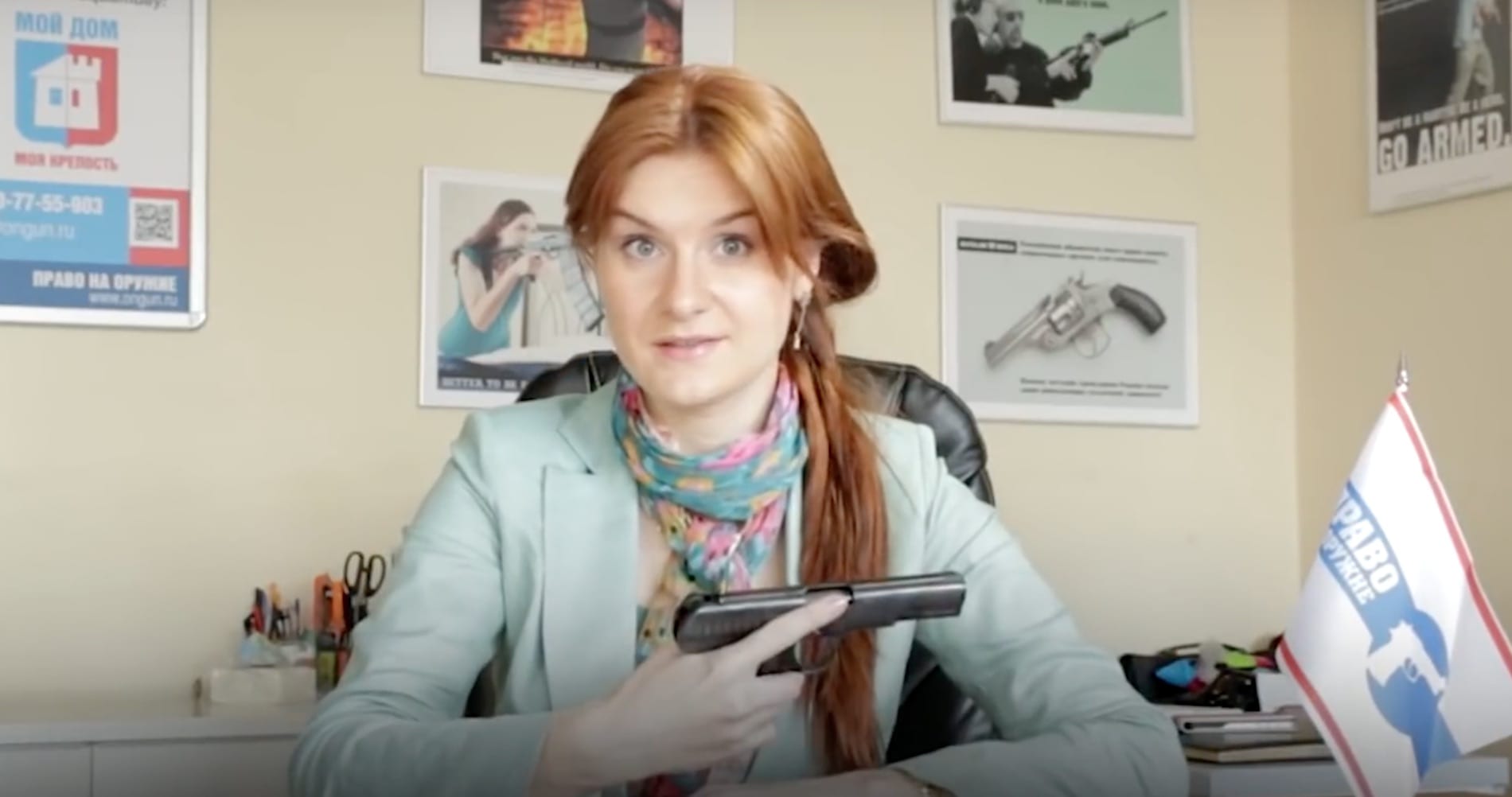 Another sign of the left is losing its mind and overplaying its hand in the Trump-Russia saga is the sudden obsession and fulmination over a Russian woman named Mariia Butina.

“Republicans Have an Alger Hiss Problem Named Mariia,” exclaims the title of a Politico piece getting a lot of play in the press. It states:

Rattled Democrats, including President Harry Truman, handled the fallout poorly, hesitating to distance themselves from Hiss and unwittingly feeding a conservative narrative that they were soft on communism.

Republicans are now having their own Alger Hiss moment.

The author maintains that Butina’s alleged efforts to ingratiate herself with conservative organizations and the GOP speaks to “how intertwined Russia and the Republican Party are becoming, and whether the Republican Party is willing and able to disentangle itself.” (A noteworthy aside: this Politico piece could use an update in light of Reuters’ exclusive report that Butina in 2015 had met with “wider high-level contacts in Washington than previously known,” including actual government officials from the Obama administration.)

The article reminds us that Hiss was convicted of perjury in 1950, served 44 months in prison, and that “intercepts declassified just before his death strongly indicated Hiss was a Soviet agent for years.” Thus, states the author, the Hiss conviction left a lingering stain on the Democratic Party and on liberalism. “If Republicans handle their Alger Hiss moment as awkwardly as Democrats did,” insists the article, “they face a similar fate.”

Okay, I understand the larger point the author is attempting to make. But please, let’s cease and desist immediately with comparing this woman to Alger Hiss. The author, in fact, proceeds with that analogy, and he’s not the only one making the comparison:

Fast forward to today. We have evidence of a Russian spy infiltrating the conservative movement and the Republican Party in order to influence U.S. politics and foreign policy. We have copious evidence of Russian meddling in the 2016 election to help elect a Republican president, who has proceeded to frequently parrot the Putin line.

Surely, our conservative elder statesmen, who for years crowed about Hiss, wouldn’t repeat the same mistakes as Truman’s Democrats. Right?

If anyone should have learned political lessons from the Hiss affair, it should have been the fervently anti-Russia yet pro-Trump conservative commentator Hugh Hewitt. One of his radio show trademarks is asking first-time liberal guests whether they believe Hiss was a communist and a spy. If guests say no or dodge the question, unable to allow Hiss’ culpability to complicate the liberal narrative of a 1950s sullied by McCarthyism, Hewitt shreds their credibility.

Hewitt, like most Republican officeholders and conservative media figures, expressed disappointment at Trump’s performance in Helsinki…. Hewitt notably drew a connection between the Hiss and Butina cases, posting on Twitter that Butina is “not a one-off.” But he’s not dwelling on it.

Well, there’s good reason not to dwell on it. To compare this woman to Alger Hiss is way overboard. What the likes of Hiss did was extremely damaging to foreign policy and national security and what would become the Cold War division of Europe. It directly affected countless millions — people forced to live under totalitarianism who lost their most basic human rights, and sometimes lost their lives.

What, exactly, did Hiss do?

For starters, Hiss was a U.S. government official who, among other things, illegally took files from his State Department office in the evening and brought them home to his wife, Priscilla, who typed up duplicates to deliver to the Soviets, before he returned the files the next morning. Whittaker Chambers was the courier who delivered these documents (“at least 52 times,” Chambers testified) to Soviet agent Boris Bykov.

This is no place to rattle off a full litany of Hiss’s misdeeds, but it is a good place (especially in service of a badly misplaced analogy to Butina) to correct one 70-year-old misperception of the left — namely, that Hiss’s role at Yalta wasn’t very involved.

One of the best and most succinct recent examinations of Hiss at Yalta was the 2012 book, Stalin’s Secret Agents: The Subversion of Roosevelt’s Government, by Stan Evans and Herb Romerstein. Chapter 3, “See Alger Hiss About This,” is a blockbuster, relying particularly on the diaries of Edward Stettinius, who was no less than FDR’s secretary of state during Yalta. Stettinius’s papers sit at the University of Virginia, where liberal scholars ignore them. Stan Evans, however, bothered to take a ride to Charlottesville to give them a read. What Evans found is a devastating case against Hiss, FDR, and Yalta.

As for which advisers FDR requested for attendance at Yalta, Stettinius said FDR asked for only two: “The President did not want to have anyone accompany him in an advisory capacity, but he felt that Messrs. Bowman and Alger Hiss ought to go.”

“Bowman” was Dr. Isaiah Bowman of Johns Hopkins University, who did not end up attending, leaving Hiss as the main man, the only one FDR singled out. As for what Hiss did, he was central on all major issues. Evans and Romerstein quoted from Stettinius’s notes to historian Walter Johnson, who was helping Stettinius with his memoirs as they worked together in the immediate years after World War II, before the Hiss-Chambers case exploded and Hiss became infamous. For the section of the memoir on Yalta, here’s what Stettinius told Johnson:

On the subject of assigning a German occupation zone to France, Stettinius told Johnson: “Alger Hiss can fill in the background.”

On the role of France: “See Alger Hiss about this.”

On the matter of forced German labor as a form of post-war reparations: “See Alger and we’ll discuss this again.”

On the post-war occupation of Germany: “Hiss would remember. Consult him.”

On the draft of the Yalta Declaration on Liberated Europe: “[See] Alger Hiss again.”

On voting arrangements for the newly conceived United Nations: “See Alger Hiss about this.”

And yet again: “Alger Hiss can fill in important background on that.”

Those are seven specific examples in writing. Imagine what was said verbally. It all flies in the face of protective claims by the New York Times and Washington Post and other sources that Hiss at Yalta was a mere “note-taker,” a “technician working among other technicians,” a “glorified office-boy.”

Evans and Romerstein included photocopies of official Yalta documents with Hiss weighing in on everything from Eastern Europe to Chiang’s China. They reproduced meeting notes from day one, February 4, 1945, when Stettinius, Hiss, and merely three others met directly with FDR “to review our proposals for the conference agenda.” They note that Hiss was the assigned lawyer to work one-on-one with FDR to (in the words of Stettinius) “consult with him [FDR] over the wording of the Polish boundary statement.”

We know how terribly Poland was shafted. FDR himself realized it. When Admiral Bill Leahy complained, “Mr. President, this [agreement] is so elastic that the Russians can stretch it all the way from Yalta to Washington without technically breaking it,” FDR sighed in response: “Bill, I know it. But it’s the best I can do for Poland at this time.”

It was apparently the best Alger Hiss could do, which was a grand situation for Stalin.

So, juxtapose this to Mariia Butina. Nothing done by Ms. Butina approaches the level of Yalta or Hiss. Nor has she done anything comparable to breaches by the likes of Harry Dexter White, Lauchlin Currie, Frank Coe, Lee Pressman, Victor Perlo’s group, the Silvermaster spy ring, the Harold Well cell at the Department of Agriculture, or the brazen stupidity (willful or not) of FDR intimate Harry Hopkins and Vice President Henry Wallace.

Good grief, Butina isn’t even an American. How do you compare her to traitorous Americans inside our government?

Of course, if you’re liberal, what’s more villainous than a Russian woman who supports the NRA and opposes Hillary Clinton?

These charges by the left are way overblown. And they tell us Joe McCarthy was reckless? And from people who have given us such delights as an Alger Hiss Chair in Social Studies at Bard College or an Ethel Rosenberg Day of Justice in New York.

Then again, I’m not surprised. This is what we should expect from people who never understood why Alger Hiss was a big deal in the first place.