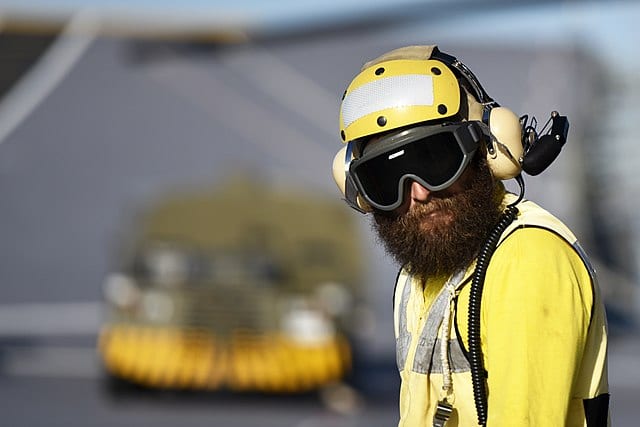 A brief item in the back pages of the Tampa Daily Bugle caught my eye. (OK, it caught my wife’s eye and she passed it on to me.) Seems some Navy men are lobbying, through that agency of mischief and disorder called social media, to be allowed to wear beards.

This latest patch of rough social water came after the Navy, abandoning sound judgment, agreed to allow women sailors to wear ponytails. The fair mariners may now also wear “lock hairstyles and wider hair buns,” whatever these might be. No mention of nose-rings or tongue studs. Yet.

During my Navy days, shortly after ship-builders switched from wood to iron and when God was still a lieutenant commander, sailors were clean-shaven. (They were also all men, it being taken without question then that going on deep water was man’s work.) The only exception being submariners, who were allowed to have neatly trimmed beards. I take it this tradition was a hangover from long ago when space on submarines was so tight that one didn’t wish to waste it on superfluities like shaving tackle. Also fresh water was at a premium, so expending it on shaving seemed extravagant.

There’s reason beyond appearance and general military tight-assness for sailors not looking like hairball rockers. When the emergency comes and sailors have to don firefighting masks or breathing apparatuses, there isn’t time to visit the ship’s serviceman for a quick haircut. One really doesn’t want to lose a life-saving seal to a ponytail. But what’s practicality and tradition today in the face of seemingly inexhaustible millennial entitlements?

I’ll try not to be too cranky about this. I guess old salts like me should be glad men sailors aren’t agitating to be allowed to wear ponytails and ear-rings. And I suppose hairy sailors, given the resources and rules of engagement to do it, can keep the sea lanes open. It will be a much less agreeable world if they can’t.