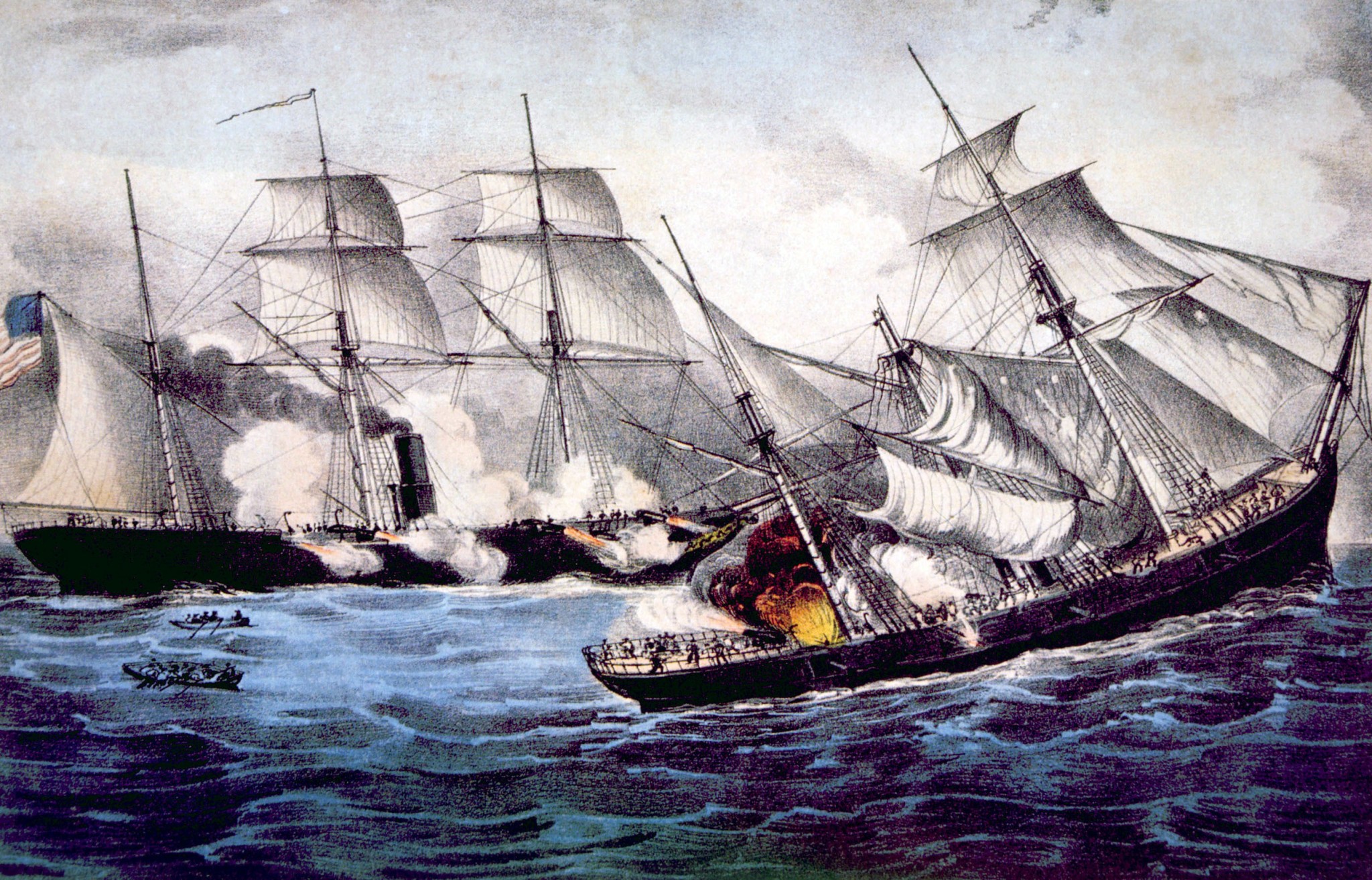 To the Uttermost Ends of the Earth: The Epic Hunt for the South’s Most Feared Ship and the Greatest Sea Battle of the Civil War

The horrendous American Civil War, which cost the lives of more than 600,000 Americans, was mostly a land war. Many Americanos, even those who’ve never studied history, are at least somewhat familiar with the biggest and costliest of the war’s engagements, fought in places with names like Gettysburg, Shiloh, Antietam, Chancellorsville, and Vicksburg. Some might even know that the brown-water navies of the two sides engaged in various rivers in the South, and that the Union Navy’s major strategic contribution was to blockade Southern ports to keep goods from Europe from getting in and to prevent the South from shipping its cotton overseas for the money needed to finance its war effort.

But few are aware that there was an important blue-water naval dimension to America’s deadliest war, with much of this taking place far from American shores. Now Phil Keith and Tom Clavin can fill this knowledge gap with their well-researched, clearly written, and dramatic account of this part of the war and of the climactic sea battle that put an end to Confederate commerce raiding. Along the way, readers will learn a good deal about the nature of 19th-century naval service, the warships of the time, the weapons they deployed, and the men who sailed and fought in them (all men then, of course, the co-ed Navy being more than a century away). It was a hard and Spartan life, full of danger from enemy guns, bad weather, and the general treachery of the sea.

The book specifically focuses on two veteran naval officers, Raphael Semmes, captain of the CSS Alabama, the South’s most successful commerce raider, and John Winslow, captain of the USS Kearsage, dispatched to hunt down and destroy the Alabama, the biggest naval thorn in the Union’s backside during the war. These two old salts had been in naval service for decades and had even served together in a previous assignment.

The book’s title comes from the orders Secretary of the Navy Gideon Welles gave Winslow: “Travel to the uttermost ends of the earth, if necessary, to find and destroy the Alabama.” The reason the Union found it so urgent to stop the Alabama was that this ship and its able skipper were wildly successful in intercepting and destroying, usually by burning, merchant ships bound for Union states with food, raw materials, and manufactured goods needed in the North.

When hostilities began after the Confederate bombardment of the Union garrison at Fort Sumter, South Carolina, in April of 1861, the Confederate Navy consisted of exactly 10 ships, carrying only 15 guns between them. And throughout the war, the rebel Navy remained tiny compared to the Union’s, which reached more than 600 ships by the war’s end. Save for the first year of the war when the Confederacy held the Gosport Navy Yard in Norfolk, Virginia, the South lacked the shipyards to build warships. After Union troops retook Norfolk in May of 1862, the South only managed to increase its fleet by sleight of hand, managing to evade British neutrality laws by having some of their ships built there under dodgy registrations.

The Confederates never had enough naval might to break the Union blockade of their ports. But a bit more than a half dozen warships managed to slip past Union blockaders to prey on shipping headed for northern ports. These commerce raiders were successful, particularly the Alabama, at finding small ships on huge oceans and sending a significant fraction of the goods that would otherwise have landed in northern ports to the bottom instead. As time went by, it became more and more apparent that the South could not and would not prevail. But what the Confederate raiders did really pinched, thus the seemingly melodramatic orders to Winslow.

The chase and the Alabama’s depredations took the better part of the war and covered much of the globe, including such datelines as Europe, Brazil, and South Africa. The Alabama, staying a step ahead of the Kearsarge, roamed as far east as Singapore in search of Union-bound commerce. The two ships finally came together and the matter was settled with blazing cannon fire outside of the port of Cherbourg, France, on June 19, 1864. The fight did not have to go to the scorecards. It ended quickly with the Alabama headed for the bottom, and Captain Semmes engaging in a clever escape so as not to become a prisoner of the Union.

The Alabama was much deteriorated by spring of 1864 from long years at sea without an overhaul. Its crew fought bravely, but by then, the ship was overmatched, and the results were dire. I’ll leave the blow-by-blow of the final battle to those who choose to read the book. But I should warn readers the descriptions of the death and maiming on board the Alabama are pretty grisly. The authors don’t linger over this, but it would be a dishonest account to ignore this altogether. The Kearsarge suffered only one fatality and three wounded. The butcher’s bill on the Alabama was much higher, with 19 killed and 21 more wounded.

By the time the Kearsarge put an end to Alabama, with thousands of rubberneckers looking on from the shore, the business between North and South had about been settled. There was still fighting to be done, but it was clear by then that the Confederate States of America was not going to be a new nation. During its long months as the South’s most feared hunter, the Alabama captured 64 ships destined for Union ports. (The crews of these ships were not killed but released.) The ship and its captain and crew had become darlings of the international press, which trumpeted Alabama’s exploits, leading some to label Semmes the maritime version of Robert E. Lee. But it was all for naught. The quixotic Confederacy, probably doomed from the start, came to an end in April of 1865 and the union was preserved.

Author Phil Keith was a naval gladiator himself, an aviator who flew F-4 Phantoms off of carriers in combat in Vietnam. He retired after 25 years of service at the rank of captain. He’s the author of six books, including All Blood Runs Red, which he also co-authored with Tom Clavin. This one received the gold medal from the Military Writers Society of America. He died March 10 in Southhampton, New York. Clavin, a journalist, is the author of 16 nonfiction books. In Uttermost Ends, the pair has put together a compelling sea story. But more than a sea story, it repays the time of readers with an interest in history, the life and perils of 19th-century naval warriors, and the meaning of courage and devotion to duty and cause, even when this duty involves incredible hardships and risk to life and limb.