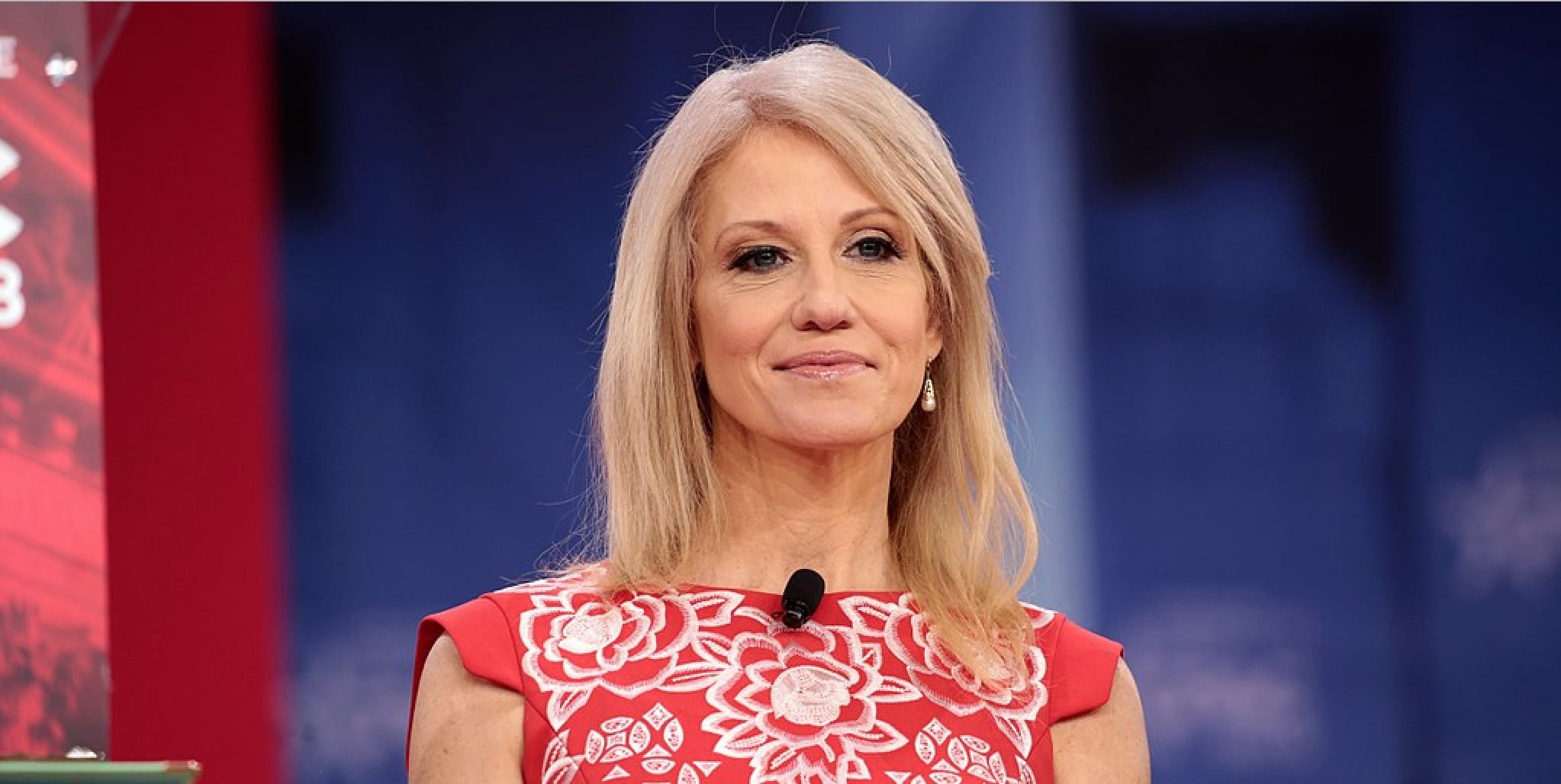 Hollywood wants female empowerment tales, especially those based on a true story — all except the perfect one. Here’s the standard pitch: the heroine escapes her patriarchal trap, takes a traditionally male power job, triumphs, but gets undermined by a sexist partner or partners. Recent examples of the genre include the obligatory Meryl Streep as Katharine Graham in The Post, Amy Adams as Margaret Keane in Big Eyes, Saoirse Ronan as Mary, Queen of Scots, and Keira Knightley as Colette. There is today a headline-making woman who fully fits the bill. Who shattered a major glass ceiling, and who must balance family with career while contending with a boorish, jealous husband. Her story is tailor-made for cinema yet will never see the light of screen. The reason? As the first successful female presidential campaign manager, Kellyanne Conway got Donald Trump elected. This makes her toxic to Tinseltown, neutralizing all other advantages.

You see, feminists rule Hollywood, and feminism is a lie. It cares less for the advancement of women than the worship of progressivism, with its blessed sacrament, abortion. Conservative women like Conway, Nikki Haley, and Condoleezza Rice have no place in their grand theme of things, despite accomplishing much more than liberal lionesses Ruth Bader Ginsburg and Hillary Clinton, any Democratic Congresswoman – now led by starlet Alexandria Ocasio-Cortez — and all 2020 female presidential candidates. Yet in the wake of Harvey Weinstein and #MeToo panic, the snowflake men who ran the Industry melted en masse. They ceded power to the feminists once beneath them, making the resultant woke product unwatchable to normal people. See — or rather don’t see — Captain Marvel.

Now feminist proselytizing has burrowed down to Young Adult entertainment. The other week, I got a call from a Los Angeles producer friend, whom I’ll call Orson. I would give his real name but, as a conservative Jew in show business, he lives in perpetual fear of being outed. In fact, he plans to wear a disguise to the L.A. book signing of my new novel, Paper Tigers, a politically incorrect romance. Sounding much like Hal Holbrook as Deep Throat, Orson urged me to check out The Chilling Adventures of Sabrina (the title character better known as Sabrina the Teenage Witch). The premiere episode began as a fairly routine plot — a high school half-witch must choose either full sorcery or the mortal world just before her 16th birthday, while dark forces try to entice or destroy her. Then, about 20 minutes in, literally out of left field, Sabrina encounters a girlfriend sobbing because four football players sexually molested her. The scene has nothing to do with the main plot. And the subsequent unnatural dialogue exchange between Sabrina and a black girlfriend might be heard at a NOW meeting, but not from any teenager on planet Earth.

“The football players are a symptom, but the disease goes much deeper into the bedrock of this school. So that’s where we fight it, with a club for young women, to meet and bolster each other, where we can discuss issues and problems we’re facing and come up with proactive solutions.”

“You mean like a club to topple the white patriarchy?”

“Exactly. To mobilize and protest in case we have to get political, to fight when we need to fight to defend each other.”

“Won’t [Principal] Hawthorne block this? I mean he wouldn’t even let me start a Daughters of the Black Panthers club last year.”

Though quite inured to Hollywood leftism, I still cringed at the dialogue, even before the “Daughters of the Black Panthers” line, referencing the militant racist party dissolved by law enforcement in the early ’70s. What young girl viewer, I thought, would make any sense of this scene? I knew why Orson, as the father of one, and a working screenwriter himself, was outraged. As Nancy Pelosi said in her ludicrous support for lowering the voting age to 16, “It’s really important to capture kids when they’re in high school.” She and her ilk just might succeed, with Hollywood’s eager help.

Young ladies have a better, realer role model than Sabrina in Kellyanne Conway. Like every other strong woman in Trump’s orbit — Sarah Huckabee Sanders, Betsy DeVos, Kirstjen Nielsen, and others — she takes liberal media flack every day and spits it out. Except she put Trump in the White House, which makes her especially loathed by Hollywood progressives. But what a movie heroine she would make — attractive, intellectual, eloquent, fearless, the mother of four and Counselor to the President of the United States. There’s even the repulsive male villain, husband George Conway, whose bizarre, poisonous tweets against his wife’s boss betray everything she works for.

I would write the Oscar-worthy screenplay myself, but as you can tell by this column, I’ve already been outed in Hollywood.