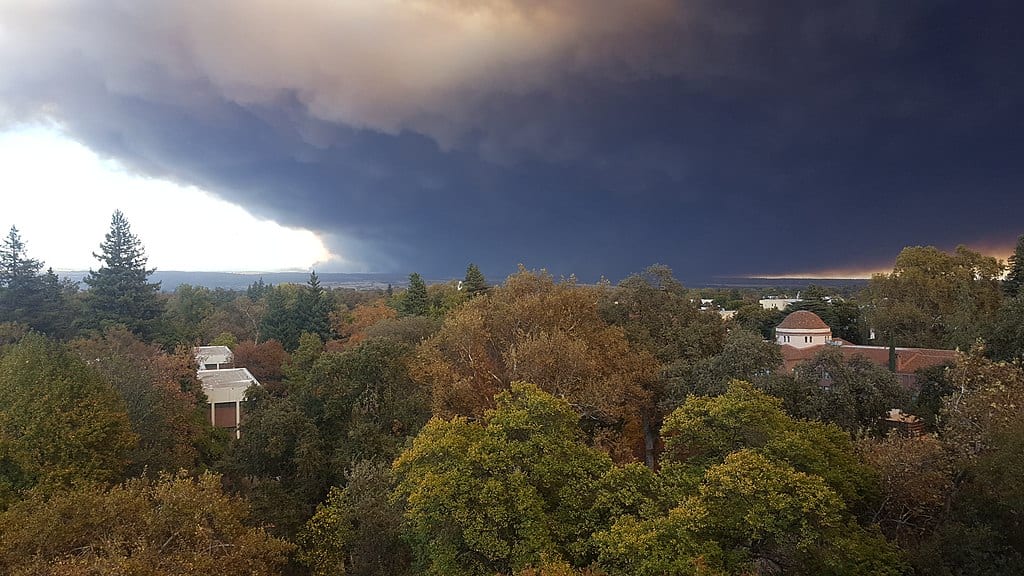 In August, 1910, a huge fire burned three million acres (destroying whole towns and taking 87 lives) in Washington state, Idaho, Montana, and adjacent Canada. This has come down to us as “The Big Burn,” the title of a 2009 book by Timothy Egan, which chronicled the disaster. At the time, the United States Forest Service (USFS) was in its infancy and its first director, Gifford Pinchot, was appalled. Consequently, it became the policy of the USFS that all fires were to be extinguished as soon as possible. Over the decades this has left us with today’s conundrum, a century of fire suppression that has in turn given us catastrophic blazes costing life, property, and treasure.

In pre-Columbian North America fires started by lightning or by resource-minded natives kept forests and grasslands in a healthy state. For instance, on the Great Plains grasslands were burned so new growth would attract bison. In the forests, the ground and understory were kept clear for the benefit of wildlife and better hunting opportunities. Lodgepole pine actually needs heat from fires to open up closed pine cones, thus releasing seeds that aid reforestation.

While I was a college student in the late 1970s, I had a summer job performing trail maintenance and cleaning campgrounds in the Plumas National Forest in California. I participated in the “mopping up” operations of two small wildfires that summer “on the Plumas,” the same national forest that was the origin of the recent Camp Fire, the 153,000 acres blaze that incinerated much of the town of Paradise, California, killing 88 people and destroying 18,800 homes and businesses, or in the nomenclature “structures.” According to the Wall Street Journal, “Seven of California’s 20 most destructive fires and five of its deadliest have occurred in just the last thirteen months.” During that time the Tubbs Fire in Sonoma and Napa counties (which killed 22) and the Carr Fire near Redding held the most destructive honors until the Camp Fire superseded them with its near total destruction of Paradise, a town of 26,000 people. So what has changed in forty years?

Back then a forest fire was more of a nuisance than a tragedy. They were relatively small, sometimes just a few hundred acres, and they rarely involved the loss of structures, other than burning through the occasional closed campground or primitive squatter’s cabin on an old mining claim (common domiciles found in the historic gold country of the Sierra Nevada at the time). The aforementioned post-Big Burn policy dictated that fires were put out ASAP, even if letting them burn in certain areas was beneficial. This, along with the decline of commercial logging, has left us with brush-choked forests that will eventually burn. The Property and Environmental Research Center (PERC), a public lands think tank in Bozeman, Montana, posits that 70% of USFS lands in the West are in need of “restoration work.” This amounts to 151 million acres, 60 million of which are at risk for “catastrophic wildfire.” Sixty million acres is the size of the state of Oregon.

As for the fires themselves, in 2000 16% of the USFS annual share of the Department of Agriculture’s budget went towards fire suppression. Today, that figure is roughly 50%, or about $2 billion of a $4 billion budget. Needless to say, other agency programs suffer in a bad fire year, as resources are directed away from them. Add to this the vast expenditures spent by individual states to assist the battling of blazes in their own jurisdictions. A recent article in Fortune tells us that as of September Cal-Fire had depleted its fiscal 2018 budget of $442 million and needed a $234 million bailout from the California State legislature. And this was two months before the notorious Camp Fire.

I’ve heard the 1960s and ’70s described as the “go-go” decades for logging on the western national forests, especially those in the Pacific Northwest and Northern California, home to vast tracts of Ponderosa Pine and Douglas Fir, big trees in terms of “board feet” yields of lumber. The timber industry (including hundreds of now-defunct lumber mills with their attendant jobs) was the main contributor to the economies of hundreds of small towns in the region, federal timber contracts keeping loggers in the woods, and mill workers and log truck drivers busy with well-paying jobs. “School section” (a section of public land set apart in a surveyed township by the U.S. government for the maintenance of public schools) payments eased local municipal tax burdens.

Commercial logging on federal public land hardly exists nowadays. Forest service timber sales get stuck in what is commonly called “analysis paralysis,” sometimes for years when the National Environmental Policy Act (NEPA) process allows them to be approved at all. Environmental groups routinely file lawsuits to further stall the process. The Northern Spotted Owl controversy of three decades ago is illustrative of that. According to the Oregon Encyclopedia, timber companies harvested 2 billion board feet from USFS sales in the state in 1990; in 2015 the figure was 55 million. Even “salvage sales” in previously burned areas are contested to the point where the trees lose their market value because they begin to rot after a couple of years. Consequently, most timber harvesting occurs on private land. For instance, Sierra-Pacific Industries (SPI) is the largest private landowner in California.

The result of three decades of this neglect is vast areas of the western national forests that are choked with undergrowth and deadfall (downed trees lying on the forest floor). In California alone, roughly 130 million trees are dead due to bark beetle infestations (though this plague is noted throughout the mountain west), leaving swaths of fire-prone brown on otherwise green mountainsides. Periodic drought that afflicts the West adds to the likelihood of bad fire seasons because beetle-infested trees are simply dead fuel. Whatever one’s view of climate change is, all this is nothing new. Drought has always been a factor related to the health of western forests.

Another is the sheer number of people now living near the aptly named “wildland- urban interface.” Residential construction has boomed in more scenic locales in the last few decades. As previously noted, the forest fires of four decades ago rarely involved structures. In just the last couple of years, California fires have taken 24,000 homes. According to the Wall Street Journal, the recent Camp Fire in Paradise alone accounted for nearly 14,000. Last year’s Tubb Fire in Sonoma and Napa counties, 5,300.

President Trump’s recent tweets blasting the “gross mismanagement of the forests” sound generalized and may reflect his understandable ignorance of detailed western forest management, but in his own simple way he is right on the mark. There are two ways to accomplish the president’s calls to action.

“Prescribed” burns are done in the winter months. In the Sierra foothills, for example, there is little or no snow cover, yet in a normal year the soil is wet from regular rainfall. Temperatures are also cooler, humidity is higher, and wind usually absent. These fires are set and monitored for days and weeks as they slowly burn away brush on the ground over a specific area.

“Thinning” projects are commercial endeavors that harvest smaller trees from around mature ones, opening up the forest floor and removing a source of fuel that would produce a “ladder effect” in the event of a forest fire. This causes those smaller trees to send a fire up into the forest “canopy,” thus producing “crown” fires that destroy the entire forest. Thinning allows a future fire to move through a forest merely singeing the thick bark near the ground of mature trees, but not killing them.

These are the fires this time. Policy changes in the modus operandi of the public lands agencies emanating from the Trump administration might improve what is now an intolerable situation.