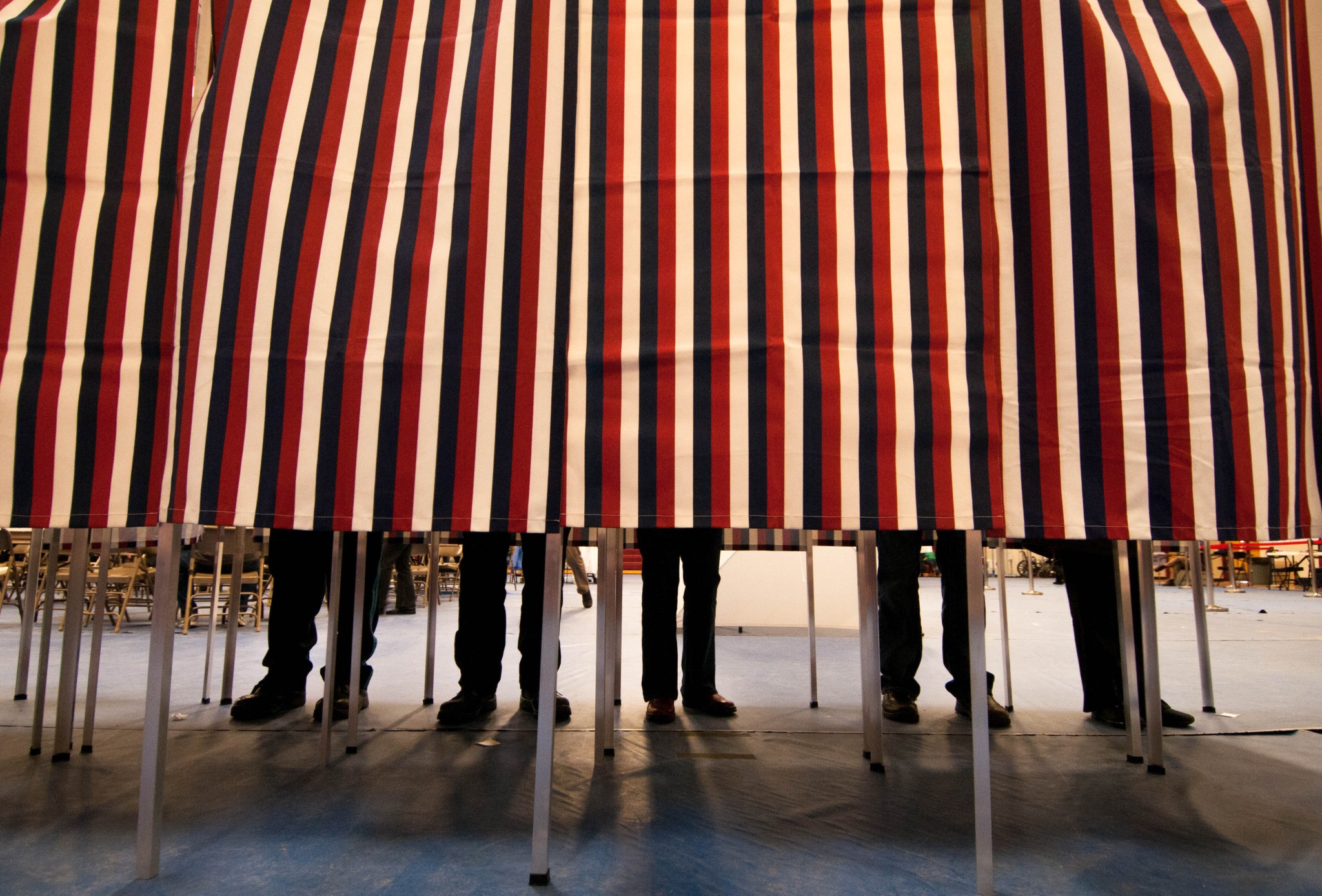 The Wall Street Journal placed a box with poll results right in the middle of its lead editorial on Thursday, Nov. 10. It cites its source as “Media exit poll, Nov. 8, 2022,” and it reads:

Is your opinion of the Democratic Party:

Is your opinion of the Republican Party:

Another narrow victory for the Republican Party.

With the failure of the red tsunami to materialize, the inevitable circular firing squad is showing up in its place. But no need to pull that trigger. We may instead have cause for sober celebration.

We should be the last to worship the Big Landslide, the Great Fix that comes from without and overpowers us into paradise.

First of all, it seems fairly certain that the Republicans will control the House. That ends any chance of progressive monstrosities being put into law for two years. Even better, there is little likelihood that anything other than the absolutely necessary or the overwhelmingly popular will get through the gridlock. If you believe that solutions come from the people primarily and the government secondarily, that is just great.

Big government is addictive, after all. Power tends to bring on a dopamine rush as one contemplates endless possibilities of just how much good one might do.

This is a very old story. The intoxicating nature of power pervades our stories from earliest times. A scholar of the old stories of northern Europe made this a theme in his own masterwork of storytelling. He writes of how, in a moment of great crisis, a plain gardener suddenly finds himself in the possession of a ring with awesome power. His mind is immediately overwhelmed with images of himself as a mighty hero bringing salvation if only he were to grasp the power as his own:

Wild fantasies arose in his mind; and he saw Samwise the Strong, Hero of the Age, striding with a flaming sword across the darkened land, and armies flocking to his call as he marched to the overthrow of Barad-dur. And then all the clouds rolled away, and the white sun shone, and at his command, the vale of Gorgoroth became a garden of flowers and trees and brought forth fruit. He had only to put on the Ring and claim it for his own, and all this could be.

We certainly see that tendency in our opponents, who continuously look to expand the power of the governments they run. The woke ideologues who are the brains behind their movement believe that all culture, all religion, all of human history is only about a struggle for power. Anything that claims any other allegiance is an enemy and to be eliminated. Thus the war on religions and on cultural canons in general — all has only been about power, and therefore, it is perfectly fine to use the most awesome concentrated power we have, the government, to take them out.

But was not all the talk from our side about red tsunamis and a total grasp on the government of the same species?

The answer, as I see it, is a qualified yes.

Qualified, because we have used our power mostly to cut out many of the tumorous growths of metastasizing government that the Left has left us with. Trump did great work in slicing away layers upon layers of obsessive bureaucratic regulation. He did what he could to drain the swamp, challenging the entrenched bureaucracy that holds itself unaccountable to the people or their representatives. He helped fill the judiciary with those who would again use it to protect the people from the overreach of government rather than rationalize further encroachment on those ancient liberties our Constitution was written to protect.

Yet we are still fascinated by the mystique of some Great Leader who will right all the wrongs and the Mighty Wave Landslide that will in a trice sweep away all corruption and welcome us back instantly to the Garden of Eden.

LBJ won the presidency with a historic landslide in 1964. By 1968, he was so reviled that he didn’t even enter the primaries, and his party lost the White House anyway.

Richard Nixon won in another historic landslide in 1972. But he didn’t even make it through the term to which he was elected.

If we win political power without winning the hearts and minds of the people to what we stand for, our victory is at best hollow and at worst, counterproductive. The latter is extremely likely, for a merely political victory builds resentment and resolve among the defeated, who will come back with determination.

Strange to say, the Left accepted this idea long ago. They played the long game, going for the cultural victories in the great bastions of culture — the educational institutions whose job it is to preserve and pass on what we have learned and muster the wisdom gleaned through time to our benefit. Most importantly, those institutions teach us how to respect the life of our heritage so that it is always fresh and vivid, creative and responsive, learning and growing.

The Left has succeeded in using the tools of the culture to gut the culture. Having attained power, they have used it to execute and amputate rather than to heal and to cultivate. Having reduced everything to power, and having attained that power, they are now free to reveal their hand. They tolerate no opinion but their own, no allegiance but to themselves, and no power that they cannot control or subvert.

As abysmal as their philosophy and aims are, their method was correct. We ought to know that, as it accords with our own ideas of the citizens being the real sovereigns. We ought to know that if the people are changed, the institutions will follow. They accepted the discipline of reaching the minds and the hearts of the young as their best strategy.

We believe that the real power is in what we teach and what we hold ourselves accountable to each day in every interaction with our fellow citizens and community members. That is why the Bill of Rights begins with establishing freedom of religion, of speech, and of the press. We preach this. We should be the last to worship the Big Landslide, the Great Fix that comes from without and overpowers us into paradise.

The simple gardener in Tolkien’s story, Sam Gamgee, in the end had that kind of common sense upon which democracy has founded its hopes and upon which we need to rely. His personal victory, and the larger victory of the good world that he fought for, was won in this moment that he rejected the temptation of external coercion.

Deep down in him lived still unconquered his plain hobbit-sense: he knew in the core of his heart that he was not large enough to bear such a burden, even if such visions were not a mere cheat to betray him.

The poll the Journal quoted shows that a majority of the voters have the common sense to be properly skeptical of those who aspire to power. To win simply to win is not only not enough, it is indistinguishable from power-worshipping of the woke.

Our true American heroes assumed power for a higher purpose. Washington established the precedent of leaving power and returning home. The Founders established a structure in which government was granted limited powers only and the Constitution’s purpose was and remains to protect our liberties from the encroachments of the powerful. Reagan pulled the government back to free the economy. Trump set the Middle East free of the crabbed and stale minds of Foggy Bottom and its think tanks to tap into the ever-surprising desire of the peoples themselves for peace. Lincoln engaged mighty power for the clean purpose of freeing Americans from state-sanctioned slavery and for upholding the sacred bond of the American Union. He realized that in the end that the military victory he won would never be enough on its own, and sought with immortal words the hearts and souls of those who had fought against him.

Jewish tradition teaches that God’s act of creation involved God’s choice to make a place for us, to pull back and not overwhelm us with His power and being. Where is God? asked a great rabbi. And he answered his own question: Where you let Him in.

This idea finds resonance in most traditions of spirituality and faith around the world.

Let us celebrate this opportunity to inform our politics again with this lively faith in the hearts and souls of our fellow Americans. Let us so conduct ourselves that we inspire their trust. Shy of that, any victory we might achieve, however grand-looking, is short-lived. Let us play the long game and play it to win a victory that endures.