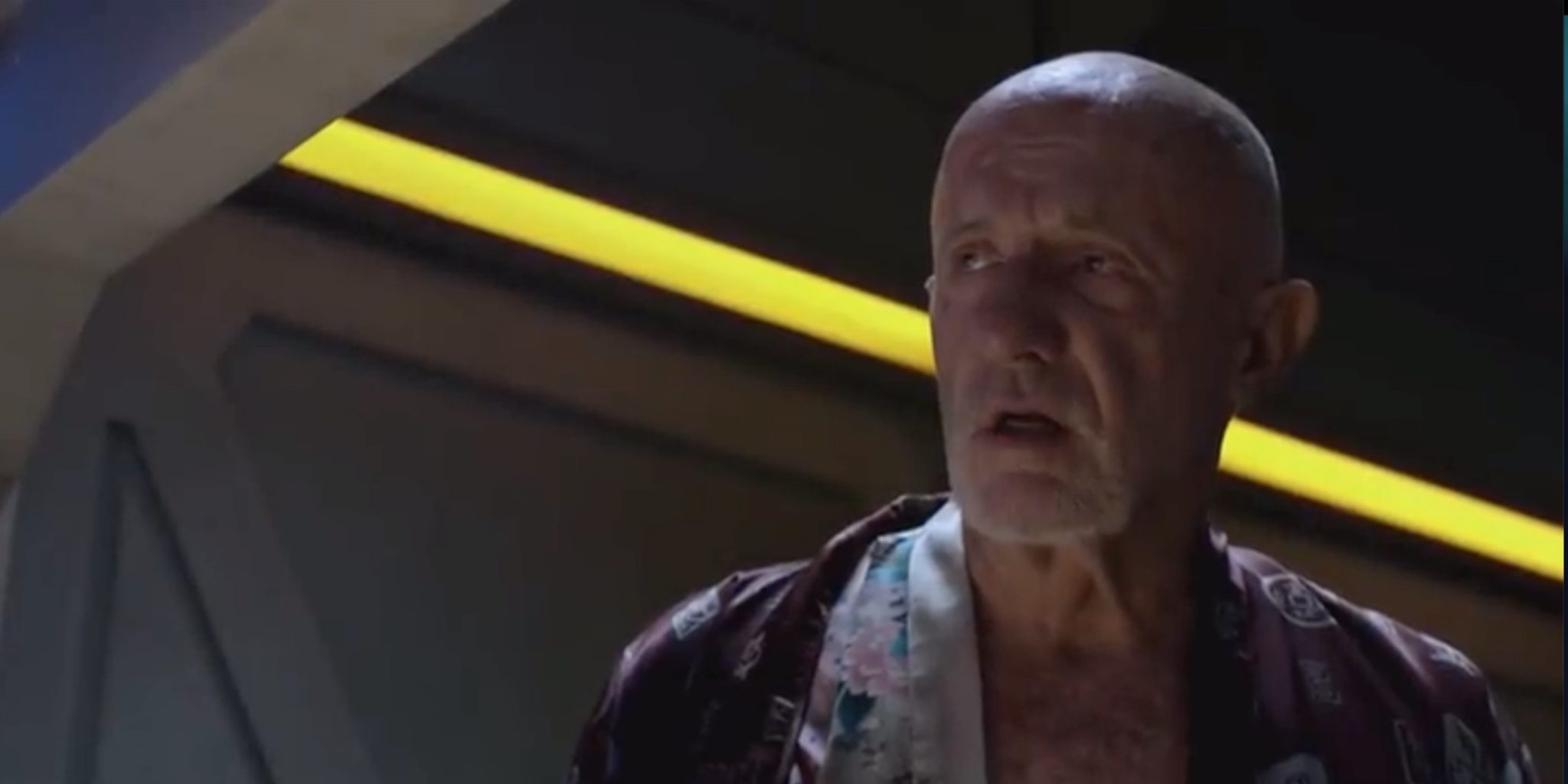 No, I’m not wasting my time watching the left-wing, anti-Trump hootenanny that is the Democrat Party’s attempt to make the rotting political corpse of Joe Biden smell like something other than the death of a nation. Instead, this week I’m catching up on one of the TV binges I’ve had on my list for some time.

That would be The Expanse, which is now available on Amazon Prime. It was, for its first three seasons, the best show on the SyFy Channel, and was then picked up by the streaming service. It’s a series based on an eight-novel saga written by Daniel Abraham and Ty Franck, under the pen name of James S. A. Corey, with a great cast full of actors you’ve mostly seen in a few things but otherwise don’t really know (Thomas Jane you probably remember from The Punisher, Jared Harris was Moriarty in the Robert Downey Jr. Sherlock Holmes movies, and David Straithairn, who’s been in almost everything).

And while The Expanse takes place some 150 years into the future, in a prospective reality in which humans have colonized the moon, Mars, and the asteroid belt, there is a whole lot more truth about the human condition in its four seasons than a week of Democrat convention speeches could ever convey.

It seems everybody’s welcome these days over there. They’ll take John Kasich, mostly because they don’t know John Kasich and what a petty, narcissistic clown he is.

But they won’t take any Scoop Jacksons or John Breauxs, because rational human beings, or even socialists who affect rationality, have no home in a party that cannot condemn 80 days of political violence in Portland or state definitively that there are two sexes. Forget about attempting to blame Trump for the poor performance of the Postal Service, something in evidence for 30 years or more, and demanding he throw more money into the maw of that failed agency or else he’s fixed the presidential election they want to put the Post Office in charge of.

Surely, that’ll work out fine for them.

The Expanse, which as I’ve said is far more interesting because it offers a considerably more realistic future than that Joe Biden and Kamala Harris advertise, depicts a future in which humanity has managed to place a foothold on parts of the solar system. Earth and the Moon, which in the show goes by Luna, since there are settlements on various other moons in the solar system, are run by the United Nations, while Mars, which some 150 years down the road from Elon Musk’s vision of colonization still hasn’t been terraformed, is a “congressional republic” somewhat reminiscent of a late-19th-century Prussia engaged in off-and-on hostilities with Earth.

And then there are the Belters, the rag-tag leftovers of human society who live in squalid conditions on the various large and medium-sized rocks in the asteroid belt beyond Mars. While the characters from Earth are presented as well-dressed and scrubbed — which as you delve deeper into The Expanse‘s four seasons (the fifth is due out by the end of the year), you realize is only a facade, as some 60 percent of Earthers subsist on a Universal Basic Income just enough to zone out on drugs and live in government-dependent irrelevance — and the Martians are a bunch of engineering geeks and jarhead types, the Belters are heavily tattooed with bad hair, awful clothes, worse reggae accents, and massive inferiority complexes they’re attempting to forge into a bootstrapped role as the newest nation in the system.

The authors of the books and screenplay have done an exceptional job of injecting realism into the storytelling of space. Sure, it’s a futuristic sci-fi fantasy, but the leaps of faith required to plow through The Expanse are considerably less strenuous than in, say, Star Trek, where socialism has won the argument and there is no need for money.

People die in droves in The Expanse. They get shot, which generally isn’t fatal; medical technology is such that hooking up to machines and pharmaceuticals readily available on spaceships will prevent a bullet from killing its victim. But being “spaced,” that is, being vented out of an airlock into the Great Beyond, is the primary cause of death for Belters and others traveling the solar system. And unlike in typical sci-fi stories, gravity plays a huge role in The Expanse; while there is some semblance of artificial gravity, which isn’t fully explained, for the most part travelers aren’t so much dealing with gravity as they are wearing magnetic boots allowing them to walk on the metal surfaces on the inside and outside of spaceships.

The authors of the story also bless the reader with the effects that time in zero-gravity can cause. Belters tend to be abnormally tall and thin, with far lower bone density than Earthers due to living where they do, and have far shorter life expectancies. There is a torture scene in the first episode wherein a terrorist from the OPA, or Outer Planets Alliance (which is a little like a combination Sinn Fein/IRA for the Belters), is in abject agony for having been leaned against a wall on Earth restrained by his armpits while the planet’s gravity pulls him downward. And Martians traveling to Earth have to take a cocktail of medications to keep from similar discomfort; first-time Martian travelers to Earth commonly break out in vomiting thanks to the changed conditions of gravity.

Not to mention that the high speeds at which spaceships travel don’t come without cost. G-force matters in The Expanse, and those characters on the show first subjected to spaceships giving their fusion drives a workout suffer fairly grievous injuries. It’s a concern that landlubbers might stroke out if they’re on a ship that travels too fast. The inventor of the “Epstein Drive,” which revolutionizes space travel in the show’s backstory, is killed by his invention because the G-force his spaceship generates overwhelms his ability to decelerate.

It’s dangerous out in space. Things go wrong all the time. And that’s before humans make first contact with an alien presence, which doesn’t manifest itself in the show as ET or the Klingons but is in fact much more sinister and frightening.

Earthers are not the heroes of the show, or at least Earthers operating as Earthers aren’t. Distrust of authority, with much reason, is a major theme of The Expanse, and the United Nations bureaucracy and political elite that governs the home planet is every bit the Swamp we now know Washington, D.C., to be. UN muckety-mucks are constantly engaged in political intrigue and drumming up phony wars as they meddle in the affairs of Mars and the Belt, usually with horrendous consequences.

It’s a bit dark, but quite refreshing from the Star Trek standard most sci-fi viewers are used to. And from a conservative standpoint, though there isn’t a lot anyone can take from The Expanse relative to a modern political context, it’s rewarding to see that The Expanse comes at the viewer from the perspective that while technology might enable humans to do great things, we’re still the same flawed, venal, mistake-prone, problematic beings we’ve always been.

And our imperfections doom us to constant strife and adversity, no matter how advantageous our circumstances, even while we scuffle our way to our greatest achievements.

That’s something the Democrats, whose entire political orientation is built around the fantasy that humanity can be perfected just as soon as we give power over to them and people who believe as they do, simply don’t get.

So yes, if you’re looking to watch something generally more true this week, I’m going to suggest the sci-fi fantasy show streaming on Amazon and not the kookfest in Milwaukee dedicated to the idea that an ancient political mediocrity suffering from diminished capacity not even in control of his own campaign is somehow qualified to run America.

There is only so much suspension of disbelief one can pack into a week, after all.