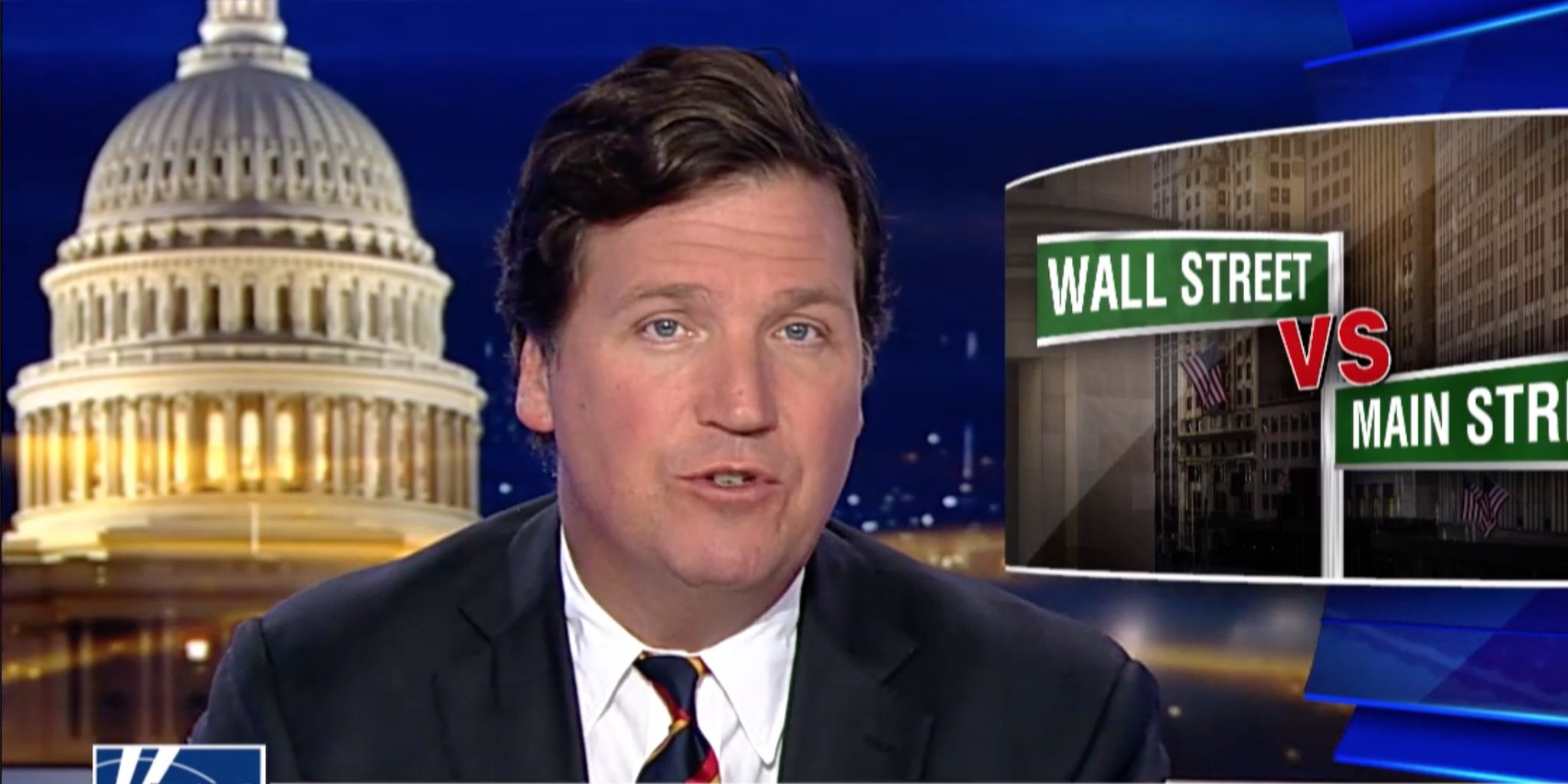 Tucker Carlson is rapidly becoming America’s most important television journalist, because Carlson is willing, where no others are, to call out the abject lies emanating from the mainstream Beltway spin machine.

And earlier this week Carlson did the public two important services.

First, he provided a measure of accountability, where virtually no one else would, in savaging “vulture capitalist” and GOP mega-donor Paul Singer for what the latter did to the town of Sidney, Nebraska, in 2015. Singer bought stock in the hunting-and-fishing-gear retailer Cabela’s, and from his fresh seat on the company’s board he cajoled its management into agreeing on the company’s sale to Bass Pro Shops. That sale hit Sidney, the home of Cabela’s corporate headquarters, especially hard. Some 2,000 jobs went away in a town of less than 10,000 people, and the economic effects of Singer’s actions there were akin to a nuclear bomb dropping on the town.

Carlson spotlighted that episode in hedge-fund shame and noted that Singer has avoided any accountability for what he’s done due to massive contributions to the GOP. The story is of a piece with a not-infrequent pattern wherein major donors to the party have pushed it into policy positions that give heft to Democrat accusations that Republicans don’t care about ordinary folks. Ace of Spades offers a must-read treatment of this story in a post written just after Carlson shined a spotlight on the Singer–Sidney mess, including asking the question why Nebraska Sen. Ben Sasse, who seems to pride himself on being a thoughtful, caring Republican, didn’t seem to have a problem with the Cabela’s sellout (coinciding, of course, with a max-out donation by Singer to his campaign).

But after he was finished with that essential piece of business, Carlson landed an outstanding interview with a reporter for the Nation, a not-particularly-conservative publication. But Aaron Maté had a lot to say that strayed from the last week’s D.C. media narrative on Ukraine, which more or less consumed U.S. Sen. John Kennedy (R-LA), who committed the grievous error of basing his public statements on what he thought were established facts.

Specifically, Kennedy had commented that there was evidence the 2016 U.S. presidential election didn’t just bear the mark of Russian meddling but that individuals in Ukraine had also left their fingerprints on the process.

This wasn’t controversial all that long ago, you know. CBS News, back in 2017:

It wasn’t so much the Clinton campaign, per se, but a Democratic operative working with the Democratic National Committee did reach out to the Ukrainian government in an attempt to get damaging information about the Trump campaign.

That operative’s name is Alexandra Chalupa, a Ukrainian-American former Clinton White House aide who was tasked with ethnic outreach on behalf of the Democratic Party. As Vogel reported, she knew about Paul Manafort’s extensive connections to the pro-Russian regime of Ukrainian President Viktor Yanukovych, and decided to dig deeper into possible connections between Moscow and the Trump campaign. As part of that effort, she discussed Manafort with the high-ranking officials at the Ukrainian embassy in Washington, D.C.

The Democratic National Committee denies that it was ever in contact with the Ukrainian government.

Yanukovych was the guy Paul Manafort was working for before President Trump brought him on as his campaign manager, which probably wasn’t the best decision he ever made. But the Democrats absolutely reached out to Chalupa in an effort to politically monetize that relationship with Yanukovych’s successor Petro Poroshenko against Trump, and when Yanukovych was tossed out of power in 2014, the regime that followed was, through Chalupa, without question dancing with Hillary Clinton’s campaign. Hot Air’s Ed Morrissey, writing at the Week back in 2017, did a good job of chronicling what the Clinton camp was up to with Ukraine, among other things:

Even more to the point, no experienced campaign would allow senior members to meet with a source without ensuring it would be productive first. As an example, recall that the Democrats worked with a foreign government to dig for dirt on Trump, too. Politico‘s Kenneth Vogel and David Stern reported in early January that the DNC contacted officials from the Ukrainian government for their own oppo research efforts. These contacts did not involve cut-outs, as Veselnitskaya may or may not have been, but did directly assist in searching for damaging information that could be used in the election.

But where Trump’s own flesh and blood was involved in clandestine meetings, the DNC was careful to keep Clinton and her family at arm’s length, handling the connections to Ukrainian officials through operative Alexandra Chalupa. Chalupa, whose work included engaging with expatriate Democratic voters, suspected Manafort was using his Russian connections to boost Trump. According to Politico, she began coordinating with officials at Ukraine’s Washington embassy to expedite her research, in the hopes of provoking Congress into holding a hearing before the election about Russian contact with the Trump campaign.

We could provide a lot more in the way of references proving that Clinton and the Democrats were using Ukrainian sources to get dirt on Trump. And no, it’s hardly beyond the pale to describe the Ukrainian cooperation in those efforts as “meddling.”

Especially when it has never been proven that the Russians provided WikiLeaks with the Democratic National Committee’s emails, which is the central allegation behind the Trump–Russia narrative the Democrats inflicted on the country for two-plus years before it collapsed earlier this year. The only “evidence” that has ever been proffered toward that narrative was a judgment by intelligence agencies we now know were compromised by anti-Trump actors both at the top and in middle management, but without any public showing of evidence of Russian hacking. WikiLeaks founder Julian Assange has never wavered from his insistence that the DNC emails were not given to him by the Russians, and it’s never been proven those emails were hacked rather than leaked.

That last bit is important because it’s a bit of accepted wisdom in Washington that has informed a narrative that somehow Trump’s election was illegitimate and the product of foreign influence — without which there would be zero basis for the Democrats’ current impeachment narrative. Fundamentally, this comes down to a familiar refrain: it isn’t news when foreign actors help Democrats get elected in American presidential elections; it’s only interesting when there are indications foreigners might not help the Dems. Consider the case of George Nader, for example, which virtually none of the mainstream media organs bothered to cover.

But when Kennedy brought up what was commonly understood back in 2017, that the Ukrainians were helping the Democrats to expose Manafort as a supposedly Russia-friendly tool for Putin to control Trump, and when he cast it as meddling in the election, something any reasonable person would have to credit as at least a valid take on the situation, he found himself trashed for his trouble.

As Carlson’s segment noted, such Establishment notables as Nicolle Wallace and Charlie Sykes, who we are supposed to believe are “Republicans,” began casting Kennedy as a Russian asset (Wallace, whose intellectual candlepower is of a level making it certain she was merely saying what someone at MSNBC told her to say, might be excused for such inanity; Sykes is less excusable). Worse, Sen. Mitt Romney rebuked Kennedy for suggesting Ukraine played a role in the 2016 election.

Of course, there is almost nothing that Mitt Romney isn’t capable of turning septic for the Republican Party. He has proven that with perfect regularity since 2006. The question is when the GOP and the people of Utah will finally flush this excrescent and odious malefactor out of our body politic once and for all.

The Washington media smelled the chum in the water left by the Never Trump crowd, and by Tuesday Kennedy had decided to cut bait on the Ukrainian-meddling narrative. He said he was finished talking about it, which didn’t stop some of the same media organs that had covered the story just 24 months before from hounding him about the “conspiracy theories” he was supposedly pushing.

If you’re reading this and concluding that the entire thing is stupid, congratulations — you’re paying attention. But until Carlson came along to bring someone from the Nation of all places to provide some sane analysis to the hysteria, the media narrative assaulting Kennedy was unchallenged.

Kudos to Kennedy for being willing to take the slings and arrows of the spinning liars inside the Beltway, at least for a while, and kudos to Carlson for setting the record straight. There isn’t enough actual honesty in any of this impeachment process, with its various clearly mendacious narratives, and when there are people of good faith willing to punch holes in the fetid web of slime woven by the Democrats and their media allies, those of us who care about the truth should stand with them.