We live in the Age of Absurdity. The men born of parents from the Age of Aquarius are having children and “chest feeding” them. I will try to explain. It took me a second pass to make sense of this Atlantic article by Britni de la Cretaz. Here are the first two paragraphs:

When Trevor MacDonald started chestfeeding about five years ago, he didn’t know anyone who had attempted it, nor had any of his doctors ever encountered someone who had. In fact, he was shocked that his body could even produce milk. As a trans man — someone who was assigned female at birth but has transitioned to identifying as male — he was born with the mammary glands and milk ducts required for lactation, but he’d had his breasts removed. Once he had his baby, his care providers supported his desire to nurse, but it was up to him figure out how.

MacDonald began blogging about chestfeeding from his home in Winnipeg, Manitoba, and soon discovered a whole community of transmasculine people around the world in the same boat, looking for guidance. For trans men and transmasculine folks, putting a baby to their chest to suckle can lead to complicated feelings about their gender. Many lactation support services are available for “nursing mothers,” which sounds unwelcoming to men and non-binary individuals. And many trans people say doctors don’t understand their bodies or experiences.

It was the header picture that threw me off: it looked like a dude, shabby goatee and all, had a baby to his (man) moob. So, was this one of those men’s rights guys trying to figure out a way to get milk from his man nipple like Greg’s milking the cat story in Meet the Fockers? Mr. Focker says, “I have nipples, Greg, could you milk me?”

No, the lactating man from the above story isn’t a man at all but a woman who is surprised that she’s lactating after she’s given birth. Yes, she’s had a fair amount of breast tissue lopped off, but she obviously still has mammary ducts and still has a nipple, and she still has a pituitary gland that produces prolactin because that’s what a female’s body does once it gives birth, and so her body produced milk. 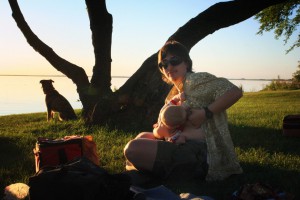 Mind anomalies are part of the human condition. Usually, family members and doctors and therapists help those with distortions of perception to see the world as it is so they can respond in rational ways. The man without the leg must adjust to his new status and deal with a prosthetic. The woman with Jesus delusions must learn to see herself. The abductee needs to be integrated into the mundanity of real life on this planet.

The movie A Beautiful Mind deftly showed the delicate nature of the psyche succumbing to delusion and how Professor Nash finally pushed back the voices to resume his creative and teaching life. He shouts to the voices in his head, “You’re not real!”

Why does our culture and society play along with someone who is gender confused? Why do we reinforce the delusion and tell a woman who is lactating that she’s a man? Why is this somehow different than a whole host of other problems? We don’t reinforce an anorexic with body dysmorphia and say, “You’re right, you’re obese, it’s a good thing you’re starving yourself.”

Yet, we’ll indulge this sort of madness:

Of the studies’ participants, 16 chestfed their babies. Nine of these chestfeeders reported no gender dysphoria — defined by the study as “the experience of distress or anxiety regarding one’s gender and body.” But two of the participants who initiated chestfeeding reported having to stop as a result of “overwhelming gender dysphoria.” Often this feeling was tied to the way the world perceived their body. One participant, whom the study refers to as Emmett, described his experience to the researchers thusly: “I was producing a ton of milk.… I didn’t have anything ready socially, either. I didn’t have any zip-up binders. I had no way to stop the milk from leaking through my chest. I had no appropriate… male clothes for nursing.”

This poor woman. The distress and confusion leap off the page and the social response is to reinforce the confusion? The response is to study ways to help her “chested.”

Enabling mental illness in an independent adult is one thing. It’s another thing to have a child be party to this crazy. The woman in the Atlantic article is nursing her baby. The baby will grow up and see that picture. The child will hear his or her mother discuss “chestfeeding” as though it’s normal and be made to play along with a lie.

No one is considering the psychological consequences to the child in these situations. Gender identity crises are rare, granted, but social sanction will open a door for more misery. Part of responsible parenthood is letting go of behaviors that are harmful to children. Gender dysphoria is a psychological problem with profound implications for parenting since parenting is, by nature, gendered. Women alone give birth. Women alone breastfeed. These are biological facts.

Perhaps the biggest problem is the social lie, itself: pretending that a woman taking hormones and dressing like a man and then birthing and “chest feeding” is normal when it clearly is not normal.

This societal mendacity recalls the Hans Christian Andersen fable, The Emperor’s New Clothes. The Emperor was vain and pompous and so bought the weavers story that only competent people could see his newly made clothes. Naked, he pretended to be wise. The Emperor had a lot of people around him pointing and nodding along with the absurdity because, of course, they had to see the beautiful garments and be perceived as smart, too. It took a child to point out the obvious. “But he isn’t wearing anything at all!”

So here is the obvious: Only a woman can give birth and breastfeed. It’s a genetic, biological fact. For those who worship at the altar of science, it’s science and basic science at that. Ignoring the obvious makes modern Western cultural mavens socially popular but exposes them as idiots. We are a nation of dopey followers staring at a naked bearded woman who is breastfeeding and calling herself a “chest feeding” man and playing along. What does it say about us?

The final words of Andersen’s classic are worth revisiting:

So now the Emperor walked under his high canopy in the midst of the procession, through the streets of his capital; and all the people standing by, and those at the windows, cried out, “Oh! How beautiful are our Emperor’s new clothes! What a magnificent train there is to the mantle; and how gracefully the scarf hangs!” in short, no one would allow that he could not see these much-admired clothes; because, in doing so, he would have declared himself either a simpleton or unfit for his office. Certainly, none of the Emperor’s various suits, had ever made so great an impression, as these invisible ones.

“But the Emperor has nothing at all on!” said a little child.

“Listen to the voice of innocence!” exclaimed his father; and what the child had said was whispered from one to another.

“But he has nothing at all on!” at last cried out all the people. The Emperor was vexed, for he knew that the people were right; but he thought the procession must go on now! And the lords of the bedchamber took greater pains than ever, to appear holding up a train, although, in reality, there was no train to hold.