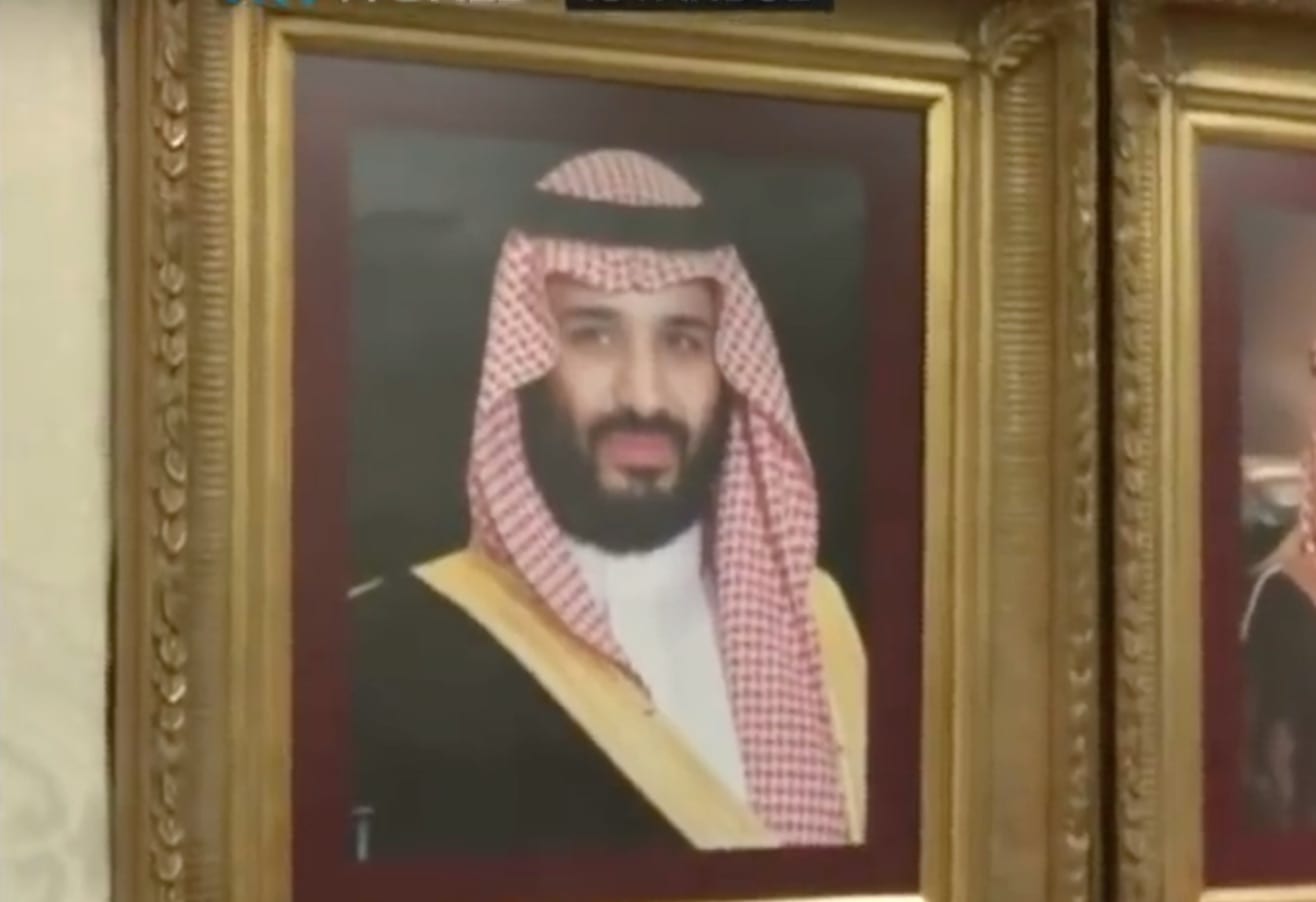 After spending the last two weeks lying about Saudi journalist Jamal Khashoggi — claiming that he left the consulate in Istanbul — Riyadh is lying again. He died, the regime now insists, in a fist fight. The royal family left unexplained the arrival and sudden departure of a 15-man squad including a forensics specialist carrying a bone saw. More important, where is the body, if Khashoggi’s death was accidental?

Some apologists for the House of Saud have been trashing him. Religious broadcaster Pat Robertson even abandoned the pretense of Christian principles in citing the employment value of selling arms to the Saudis. Blaming the murder victim is ludicrous: I met him more than once and he was a complicated figure, with connections to the royal family and past friendliness toward political Islam. However, he leaned in a liberal direction and pushed for greater freedom in a region that desperately needs to overthrow Islamic fundamentalists and licentious princes alike. Freedom House only rates one Arab nation, Tunisia, as free, and three others as partly free. The rest are unfree — Saudi Arabia ostentatiously so.

Khashoggi went into exile because the supposedly reforming crown prince punished even modest dissent. Khashoggi died because he dared criticize a regime which continues to oppress its own people, suppress the slightest hint of political and religious liberty, destabilize the Middle East, promote radical Islamism around the world, including in America, and underwrite violent jihadists in Syria and elsewhere. Saudi Arabia is everything that it accuses Iran of being. Crown Prince Mohammed bin Salman’s misrule is harming American interests.

While running for office President Donald Trump appeared to see the Kingdom of Saudi Arabia plain. There certainly were no shared values. He called the Saudis “bullies, cowards.” National interests occasionally overlapped, but candidate Trump realized that the KSA demonstrated an unfortunate warmth toward violent Islamists. He complained that the Saudis were “paying ISIS.” And, like so many other nominal allies, he recognized that Riyadh was determined to leave the heavy lifting to Washington.

During the Cold War a Soviet lunge into the Persian Gulf would have dramatically impacted the world energy market. However, prophecies of the end of Western industrial activity inflated Soviet capabilities. In any case, the prospect of outside control long ago vanished.

Any attempt by Riyadh to wield oil as a weapon is bound to fail. To start, it is more important for the Saudis to sell their oil than for Americans and others to buy it. The pampered royals need money to maintain political control and enjoy luxurious living. A selective oil boycott would merely rearrange tanker schedules, as middlemen ensured everyone who wanted petroleum could buy it. With the oil market growing ever larger and more diverse, Saudi energy influence will continue to fall.

Beyond oil Saudi Arabia offers America little. Even the Kingdom’s fascinating culture and history is tainted by ruthless intolerance of individual liberty, political democracy, and religious freedom. The KSA is uniquely oppressive, allowing not a single synagogue, church, or temple. Even North Korea has a couple of churches for show.

Political repression is intense as well, growing under MbS (as the Crown Prince is known) even as he traveled the world pretending to be reformer-in-chief. Last October the Kingdom declared criticism of the king and crown prince to be acts of terrorism. Wrote Khashoggi in his last column, published posthumously: “The jails of Saudi Arabia in fact are now brimming with people ensnared in the crackdown launched by the crown prince.”

The State Department is equally blunt in its assessment:

The most significant human rights issues included unlawful killings, including execution for other than the most serious offenses and without requisite due process; torture; arbitrary arrest and detention, including of lawyers, human rights activists, and antigovernment reformists; political prisoners; arbitrary interference with privacy; restrictions on freedom of expression, including on the internet, and criminalization of libel; restrictions on freedoms of peaceful assembly, association, movement, and religion; citizens’ lack of ability and legal means to choose their government through free and fair elections.

Riyadh does not merely stand for intolerance. It actively promotes religious hostility around the world, having spent some $100 billion pushing Wahhabism, including in the U.S. While not overtly violent, Wahhabism preaches hatred of non-Muslims. This hostile mindset lays a foundation for the violence that permeates the Muslim world against religious minorities, including other Muslims, as well as violent terrorism against others. Moreover, no country is more responsible for terrorism against Americans: private Saudi money aided al-Qaeda and fifteen of nineteen 9/11 terrorists were Saudis.

Afterwards the KSA underwrote radical insurgents in Syria, groups that would be happy to target America. Although Syrian President Bashar al-Assad has ruled brutally, he has not, and is unlikely to, attack the U.S. Violent Islamists pose a much more serious threat to America.

The Kingdom evidently is no friend of the U.S. For some, including today’s White House, all that matters is Iran, which the Saudis implausibly compare to Hitler’s Germany. In fact, Tehran is weak. The economy suffers from isolation and sanctions. Far freer and more diverse than the KSA, Iran hosts a more open political environment, with serious dissent and opposition to the government. Although Iran’s elections are not free, they matter, and challenge the authority of the Islamist regime. Not so in Saudi Arabia.

Nor is Tehran a serious military threat. Any attack on the U.S. would risk devastating retaliation. Iran spends a fraction of what nuclear-armed Israel and Saudi Arabia devote to the armed services. Bolstered by the endless weapons purchases encouraged by the president, Riyadh and its Gulf allies should be capable of deterring Tehran from aggressive action.

Nor is the MbS government a force for regional stability. Iran has done far more than Riyadh to combat the Islamic State and other Islamic radicals, who usually are Sunnis. In contrast, the Saudis promoted Wahhabism throughout the region, including in Yemen, and underwrote violent radicals in Syria.

MbS also is recklessly aggressive. Three years ago the KSA invaded Yemen to restore a puppet regime to power. The controversy had little to do with Iran, as claimed by Riyadh. An independent Yemeni (at one point two states) dates back to 1962. Since then the territory has been almost constantly at war. Indeed, Riyadh intervened decades ago on behalf of one Yemeni government, facing off against another Yemeni state backed by Egyptian troops. Riyadh’s foolish war allowed Tehran to bleed the ineffective Saudi forces. The KSA has dragged Washington into the murderous fight, turning an entire people, who otherwise had nothing against America, into enemies and potential terrorists.

Last year MbS shocked even his friends by kidnapping Lebanon’s prime minister in order to force the latter to resign, apparently believing doing so would weaken Hezbollah, the Iranian-backed faction in Lebanon. Instead, the country united against the Saudis, who ultimately were forced to release Saad Hariri, who resumed his position. The Saudi-Emirati attempt to isolate Qatar, which originally was to be followed by a military invasion of the offending emirate, also backfired badly, dividing the Gulf and strengthening Iran. Riyadh supported stability of a sort by underwriting vicious, oppressive regimes in Bahrain and Egypt, but even more virulent popular opposition may eventually break through.

The murder of Khashoggi highlighted MbS at his most reckless. Despite ingenuous comments by President Donald Trump and other Saudi groupies, no serious person believes that a 15-man kidnap/hit squad, including a forensic specialist with a bone saw, showed up at a Saudi consulate and killed Khashoggi without MbS’s approval. The crown prince tightly controls government policy and is notably intolerant of dissent.

Indeed, in believing no one would notice or care about such an operation, MbS must share the hubris of the gods. As the story built and foreign criticism rose, the crown prince demonstrated that he was not ready for prime time. Rather than confront the crisis, his government made it worse, offering a succession of transparent, incredible lies. Then came ludicrous threats of retaliation if other nations imposed sanctions, followed by a statement suggesting that Riyadh was only kidding when it came to punishing the U.S. Finally, the KSA blamed Khashoggi for his own death, as if he was responsible for being ambushed by a well-armed gang in his nation’s consulate.

Rumors, unconfirmable by their very nature, are now circulating of top princes discussing a change in succession. MbS possesses seemingly supreme power, but only because it has been granted by his father. Chosen to lead the KSA into the future, his policies have been controversial at best and catastrophic at worst: turning the Ritz-Carlton into a prison, slaughtering school children in the Yemeni war, squeezing the last gasps of intellectual freedom out of Saudi society, kidnapping Lebanon’s Hariri, intervening in the Syrian civil war, treating Qatar as an enemy.

Yet none of these generated much foreign reaction. All were essentially dealing with statistics, in the famous observation by Joseph Stalin. Khashoggi was an identifiable individual, whose murder focused attention on MbS’s misrule, creating almost universal revulsion in the West, from which the Saudis seek military protection and economic sustenance. Even the crown prince’s father might be dissatisfied with his performance, and what it portends for the future. Washington should add its concern over someone who lacks the character and temperament to rule, let alone absolutely.

As a result, King Salman bin Abdulaziz al-Saud might decide that another, more responsible son, should rule. Already the enfeebled ruler reportedly felt the need to intervene in the crisis. There might be more changes to come. MbS took the leadership test and failed. He might not go quietly, but he has made enemies freely, and even his nominal friends will have trouble trusting him to guide the nation forward in uncertain times.

Saudi Arabia’s future long has been in doubt. The Kingdom desperately needs far-reaching reform, which spurred Western fantasies about MbS as the chosen one. However, he proved that he has the heart and soul of an autocrat and killer. Worse, he proved to be a reckless, arrogant fool. His dangerous excesses, gambles, and threats have hurt the KSA and the U.S.

For both nations the risk of MbS becoming king is too great to accept. The sooner the Saudi royals police their own, the better for everyone involved. In the meantime, Washington should treat the current Saudi regime as the criminal enterprise which it has become. The embarrassment and other costs of embracing such a regime will only grow along with MbS’ irresponsibility.