by Ellie Gardey
Image courtesy of “The Chosen.”

On Friday, season three of the TV series The Chosen, which chronicles the journey of Jesus’ disciples, will premiere in over 2,000 theaters in the United States. The showing will include the season’s first two episodes.

The show is perhaps the most popular Christian motion picture of the 21st century, as it has achieved over 420 million episode views. It is currently available on Amazon Prime and on the show’s own app, but showrunners have recently struck a deal with Netflix, which is set to be announced soon.

The Chosen has been successful in bridging the divide between Christians who hold diverging views on the meanings of Christ’s teachings and the roles of his disciples. Its way of allaying controversy (much of it, anyway) has been to focus on what the Gospels say and to emphasize the first disciples’ wonder at a human Christ who is at the same time God.

This emphasis is not entirely without its opponents. The show’s creator has distanced the show from Mormonism, officially known as the Church of Jesus Christ of Latter-Day Saints, which holds that Christ is just one god and that any person can become a god. 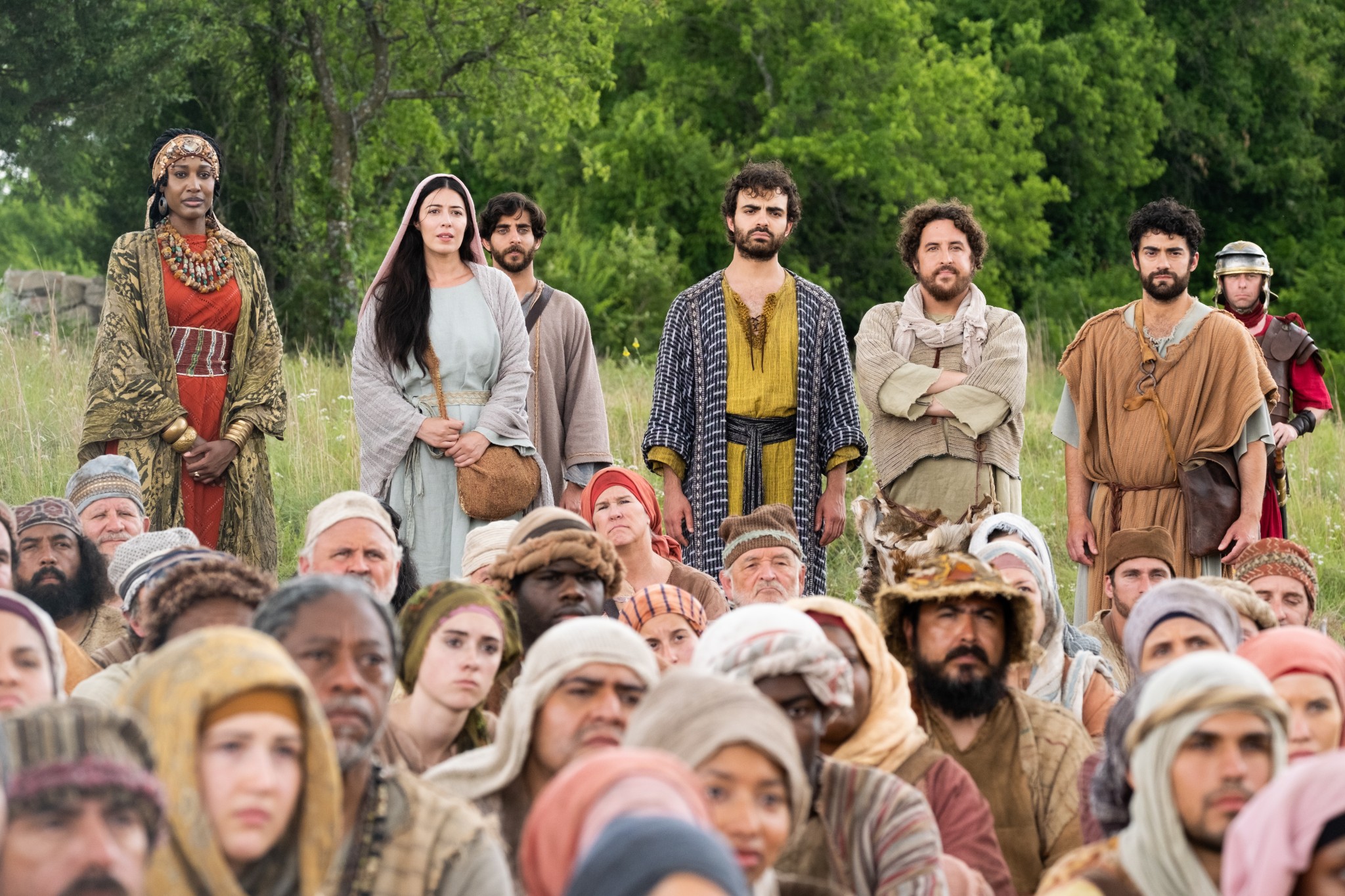 Image courtesy of The Chosen.

While some of the deepest disagreements between Catholics and Protestants are set to be portrayed in later seasons — such as the breaking of the bread at the Last Supper — one potentially divisive character omnipresent in the show is Mother Mary.

In many Protestant churches, Mary is virtually never discussed. If she is, she is not venerated in the same way as she is in the Catholic Church — in which she is understood as God’s first and preeminent disciple, the mother of God, spared of original sin from the moment of her conception, and the queen of the universe and the Church. Instead, she is viewed in many Protestant denominations as a normal woman who was especially faithful to God.

This disparity has created controversy over filmmaking that depicts the life of Christ.

After the release of The Passion of the Christ in 2004, an article in Baptist Press, the official news service of the Southern Baptist Convention, complained that the film portrays the apostles Peter and John as referring to Mary as their “Mother” and that the subtitles for these scenes capitalize the word. Moreover, the article complained that Peter told Mary not to touch him after he denied Christ, “as if she had some kind of holiness that he did not deserve to take part in.” The writer, James R. Wicker, a professor of the New Testament at Southwestern Baptist Theological Seminary, wrote that this was “clearly an unbiblical tradition.” The Passion of the Christ was directed by Mel Gibson, a Catholic.

Baptists also complained that the film depicted Mary as a perpetual virgin with no other children besides Christ. Wicker insisted, “Matthew 1:25 clearly implied that Joseph and Mary had normal conjugal relations after Jesus’ birth.” (The verse says, “[Joseph] had no relations with [Mary] until she bore a son, and he named him Jesus.” The Catholic Church says that the word “until” in Greek “does not imply normal marital conduct after Jesus’ birth, nor does it exclude it.”)

In The Chosen, which is directed by Dallas Jenkins, an evangelical, virtually no criticism has so far been mounted against the portrayal of Jesus’ mother. Instead, there has been nearly universal acclaim by both Catholics and Protestants for the show’s depiction of Mary, who is played by Vanessa Benavente.

Mary in The Chosen is a compassionate, motherly figure who looks at Jesus with adoring eyes and knows and loves him more deeply than any other character.

In episode five of season one, which portrays the Wedding at Cana, Mary urges Jesus to begin his ministry. This interaction displays a special relationship in which Mary comprehends Christ’s mission before anyone else.

The American Spectator sat down with Benavente to better understand her character’s relationship with Jesus and her role among the disciples in the show.

Benavente told The American Spectator that she thinks her character and Jesus’ relationship are “very unique in the sense that we have a relationship that only two people have experienced in this lifetime, just him and me.”

“A mother and a son is always a unique relationship,” Benavente said, “but even more so if you’re talking about the son of God.”

She explained that as part of their relationship, Christ leans on Mary for certain things, and Mary leans on Christ, especially because there were times when nobody else could know about Jesus’ mission. “I’ve been really in tune with what Jesus’ mission has been for way longer than these other characters have been,” she said.

Benavente continued, “I definitely would love to explore a little bit more of our relationship.”

Mary also plays a special role in the series’ depiction of the community of disciples. Mary is a trusted leader who is more secure than anyone else in her relationship with Christ and who has the most trust in Christ’s leadership. The characters rely on her quiet confidence in times of turmoil, such as when Jesus is taken in by the Romans during season two. “There’s all this tension between the disciples,” she explained, “and I’m kind of reminding them what it is that we need to do and who they’re following.”

Benavente explained that her character sees herself as a mother to all of the disciples. “They’re the friends of my son,” she explained. “They need guidance as well every once in a while. I keep things in perspective for them because they can get too excited about things.”

During episode three of season two, infighting breaks out among the disciples when there is frustration with Jesus’ ministry, which doesn’t match up to the disciples’ expectations for the Messiah, as well as arguments over the past of Matthew, who was formally a tax collector. When Jesus returns late at night, exhausted from a day of physical labor of healing hundreds of people, only to encounter the fighting, the disciples react with visible guilt and shame.

Mary is the one who tenderly takes off an exhausted Jesus’ shoes; washes his feet, hands, and face; and helps him into bed in his tent. As Mary serves him, Jesus gently tells her, “What would I do without you, Ima?”

Benavente said that she sometimes gets “this feeling in my heart of what I should do, and I turn the page of the script, and it’s written exactly like that.” That happened with this scene, she said.

“I can’t just stand there,” Benavente said, “I need to go to him right away because this is the moment where he needs his mother. Who else, other than me, is going to put him to bed, you know? Nobody.”

Benavente called this her favorite scene out of the first two seasons and lauded the performance of the actor who plays Jesus, Jonathan Roumie. Roumie improvised the line “What would I do without you, Ima?,” she said.

The Chosen has been surprisingly successful in avoiding controversy over this depiction of Mary as the disciple par excellence. Christianity Today, an evangelical magazine, said it this way on Wednesday: “The Real Miracle on the Set of ‘The Chosen’ Is Christians Coming Together.”

One evangelical who has written bible studies and reflections based off The Chosen, Kevin Keating, wrote on his blog that he appreciates the show’s emphasis on Christ’s special relationship with Mary, and that he sees it as a breath of fresh air compared to the conventional Protestant depiction of Mary:

In contrast to how popular Protestant Evangelicalism tends to deemphasize Mary, The Chosen presents us with a picture of Jesus’ relationship to his mother that is compelling and beautiful. Of course, in doing so, The Chosen is simply being faithful to how the Gospels themselves depict the relationship between Jesus and Mary. Sadly, Protestants have sometimes been more concerned about defining themselves in reaction against Roman Catholicism than they have been with faithfully representing certain elements of the biblical story.

Many Catholics have likewise been pleased with the show’s depiction of Mary. James Merrick, a lecturer in the theology department at Franciscan University of Steubenville, wrote for Angelus News, the news source for the Catholic Archdiocese of Los Angeles:

One of the pleasant surprises is how “The Chosen” depicts Mary. Jenkins is very concerned and respectful here, remarking: “If there’s one thing I’m…nervous about when it comes to the show…it’s my portrayal of Mary.” The depiction is praiseworthy from a Catholic perspective as it marvelously highlights her generosity and joyfulness as well as her intercession.

While The Chosen’s first two seasons’ depictions of Mary have kept Protestants and Catholics largely happy, portrayals in future seasons, including the one set to be released Friday, could lead to more disagreements.

Benavente isn’t worried about this, however: “I have absolute 100 percent faith in [the writers] in that what they are planning to do with the nine seasons is going to be just as breathtaking and amazing as what we’ve been seeing so far.”