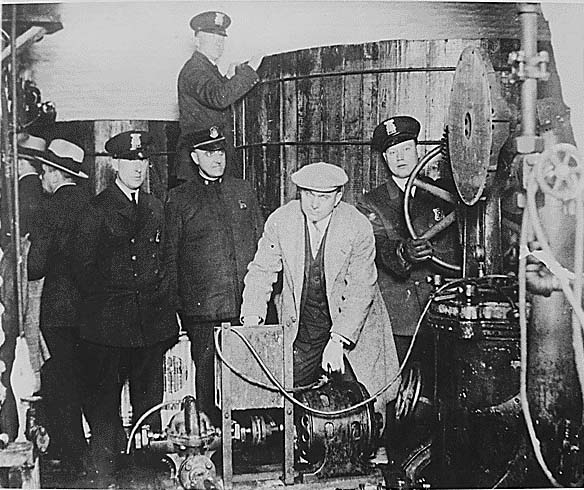 Empowered by the 18th Amendment, the federal government intervened in the lives of millions of Americans. Those who pushed for Prohibition believed it would better the health of individuals and it would improve the health of society if the government criminalized the manufacture and drinking of alcoholic beverages.

One of the immediate effects of the shutdown of legal booze was the scramble to obtain alcohol in whatever illegal way it could be had. Since ethanol was still produced in large amounts for industry, that was an obvious source to tap, since it was widely available and cheap.

The government regulators especially liked the use of wood alcohol — methanol — as a denaturing agent. This was because clever bootleggers would redistill the denatured alcohol, and that was at first effective in making the alcohol somewhat fit for human use. Methanol, however, isn’t so easily stripped by that method. And methanol should deter drinking because it can cause blindness and death.

And cause blindness and death it did. Hundreds died each year in New York alone and many more across the nation.

Some were horrified by the results of this deliberate government poisoning. Sen. James Reed of Missouri said, “Only one possessing the instincts of a wild beast would desire to kill or make blind the man who takes a drink of liquor, even if he purchased it from one violating the Prohibition statutes.”

But the government felt differently. Their response to the deaths and the uproar they were starting to cause was to double down.

Deciding that causing thousands of deaths was fine as long as the result was less drinking, and since dead men — or women — don’t drink, the bureaucrats pushed things forward. The government now set up rules to make denatured alcohol twice as deadly. A 1927 rule listed these other poisons that were now required, either singly or in combination, to be added to industrial alcohol: mercury salts, benzene, cadmium, zinc, ether, chloroform, carbolic acid, acetone, iodine, brucine (similar to strychnine), and formaldehyde.

The callousness of the government and of Prohibition apologists to the deaths their rules caused seemed to turn the hearts of many people against the Great Experiment. A wet candidate won the nomination of a major party in the 1928 presidential election, and although he lost, his cause gathered momentum. By 1933, the 18th Amendment had been repealed.

The callous zealots of Prohibition may have been reincarnated in the mandatory vaxxers of the current Administration. They give no indication that they find any problem in causing millions of people to lose their jobs if they continue to make their own decisions about whether or not to vaccinate.

Like the drinkers during the 1920s, their reasons may be good or they may be bad, even very very bad. Reason, in this case, is to be the excluded from these millions of ordinary citizens, and reserved only for the government and its approved thinkers. So the President has decreed, though as of today, a federal judge is saying “not so fast.”

Most of the backers of Prohibition were well-meaning. Not knowing otherwise, the mandatory vaxxers may well be, too.

And just like the Prohibitionists, they have overreached, rationalizing that their deliberate bringing of misery and ruin to others is justified and right, and that those people who suffer deserve it.

Alcohol continues to curse lives and to curse society. Most of the problems the Prohibitionists ascribed to it are real.

But Prohibition also shows us that some cures can be worse than the diseases they are meant to treat. That needs to be considered very much today. When an Administration insists on calling the abject and shameful Afghanistan rout a triumph of enlightened policy, due diligence is required about anything they recommend. It may just be that callousness and its curses outweighs the promised good.