a friend who is a literary agent told me that he cannot even get editors to read first novels by young white male writers, no matter how good; they are just not interested. this is heartbreaking for writers who may in fact be brilliant.

In typical fashion for a liberal artist going somewhat against the grain, Oates had to virtue signal in her conclusion, adding, “& [be] critical of their own ‘privilege.’” But getting Joyce Carol Oates so close to the right side just shows how far left the literature business has gone that it could have conceivably rejected a superbly written traditionalist novel like Last Summer Boys by Bill Rivers, a sweet coming-of-age boys tale set in backwoods Pennsylvania during the incandescent summer of 1968. 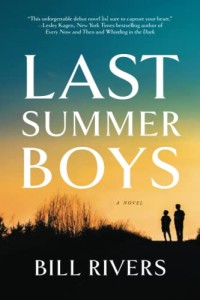 The central family, the Elliots, represents everything the progressive medium deplores: a loving, virtuous, patriotic Christian clan unquestionably headed by a strong, silent, Korean War-hero, handyman Dad and a beautiful, feminine, wise, maternal, homemaker Mom. The four lead boys also have no place in modern liberal literature. They are the laconic, tough eldest son, Pete, 17; sensitive, intellectual middle son Will, 16; naïve yet observant Jack, 14, who is the narrator (in present tense); and their budding journalist cousin, Frankie, 14.

Frankie has been sent to stay with the Elliots in Apple Creek while his cop father deals with the Philadelphia riots following the murder of Martin Luther King Jr. Pete is about to turn 18 and almost certain to be drafted, which gives Jack recurring nightmares about him getting massacred in Vietnam — and the determination to somehow prevent it. Will devoutly follows the progress of his idol, Robert F. Kennedy, in his race for the 1968 Democratic presidential nomination, and has an unrequited crush on the prettiest girl in Apple Creek, Anna May Fenton.

The specter of Vietnam looms over the story. An early exchange between Pete and Will establishes the life-and-death stakes for Pete, further troubling the observant young Jack. Driving home through town after picking up Frankie, Pete disparages the handful of hippie kids holding war-protest signs. “They’re fighting to keep your ignorant hide here and alive,” says Will. “Not to send you off to Vietnam to kill and get killed like that idiot Johnson wants.”

Narrator Jack can only express his anguish internally:

Led by Pete, the boys plan an expedition to find a crashed fighter jet in the nearby wilderness. When Jack overhears his father’s friends remark that famous people don’t get drafted, it gives him a brainstorm: have Frankie write a newspaper story celebrating Pete as the heroic prize hunter, a fame-making venture that will keep his brother out of Vietnam. This is a slight stretch given that the most famous athlete of the time (arguably all time) got drafted and went to prison rather than serve in the military, but Rivers’ superb writing assuages the discrepancy.

Great writers such as Charles Dickens and Harper Lee realistically blend a child’s naïve comprehension with sophisticated description, and Bill Rivers rises to the challenge. He richly evokes the wonderful mystique of boyhood when neighboring woods become gateways to adventure, a drive-in theatre a fighting arena, a graveyard at night the haunt of horror, and kissing a beautiful female crush the ultimate thrill. A gripping scene where the boys and their dog, Butch, shelter in a cave from a furious whirlwind exemplifies the author’s descriptive skill. Rivers writes:

Will’s pack picks up in sails right out of the cave. The others go right after it, one after the other, and now that awful, shrieking wind is tugging at me, tugging at Butch, trying to drag us out too. But that rope around my chest holds; the twister can’t have us.

Rivers describes a young boy’s — Jack’s — first pangs of sexuality in a way that MTV viewers used to teen artists brandishing their private parts would scoff at but that lovers of literature will appreciate:

There’s something about the way she moves, the way her dress sways around her willowy body, it makes me catch my breath. Don’t know what it is, but I got to thinking just then that my brother Will is one of the luckiest boys I know.

A brilliant bit of artistic foreshadowing puts Rivers at a higher level. It’s the day of the California primary. Awakened from his usual nightmare, in the attic where all four boys sleep, Jack gets bitten by a mosquito and intends to kill it. But the only weapon at hand is Will’s Saturday Evening Post with Robert F. Kennedy’s picture on the cover. Jack hesitates for a moment, and then he smacks the bug on the window with the magazine. Noticing the mosquito blood all over RFK’s face, Jack tries and fails to scrub it off.

Last Summer Boys is a fine read for what’s left of this summer and for the fall, when politically — as in November 1968 — the forces of darkness, including woke publishers, may fall.