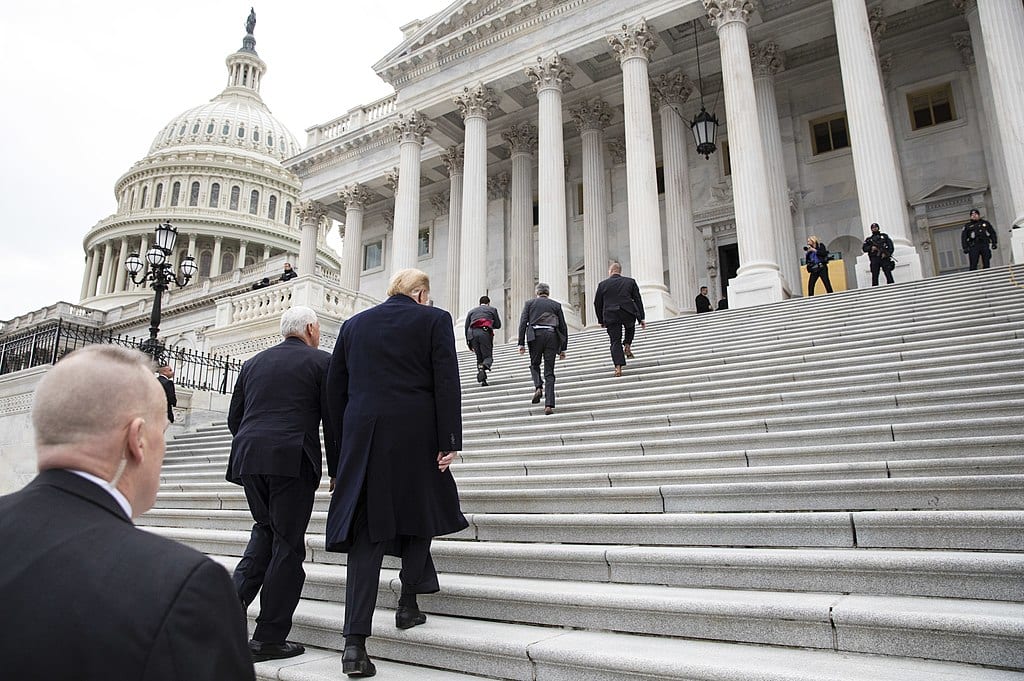 In an interview with the Wall Street Journal on Sunday, President Trump said he believes it’s less than 50/50 that a deal will get done with Congress that includes border wall funding. I think he’s right.

It’s impossible to overstate the magnitude of Trump’s December 11 blunder saying to then-Speaker-elect Nancy Pelosi (D-CA) and Senate Minority Leader Chuck Schumer (D-NY) — and to millions of Americans watching on television — “I’ll take it,” meaning any responsibility for the shutdown would be his. That statement — the sort of brashness which his supporters love — handed the Democrats their strategy. The question now is not whether Trump’s stabbing himself in the back will prevent him from fulfilling his single biggest campaign promise — “the wall” — but whether it will effectively end his presidency.

If Nancy Pelosi has anything to say about it — and she does — it will be both. The question is whether Trump and his team have the political skills, and enough support among House and Senate Republicans, to fight to a draw or a narrow loss rather than the “I’ll take it” moment eventually being seen as Trump’s Waterloo.

Given last week’s outcome, it is difficult to see either enough political talent in the West Wing or sufficient GOP congressional support for Trump to have anything close to an acceptable result in hand when the current February 15 deadline arrives. But like this weekend’s Super Bowl, on any given Sunday…

In the Senate, Majority Leader Mitch McConnell (D-KY) will bring up anything that can pass and that the president will sign. He’s willing to upset some conservatives along the way because he knows the alternative — another shutdown — is much worse for the GOP. Indeed, Cocaine Mitch aggressively warned Trump against going down the shutdown road.

The question is whether the bill will be one that gets almost every Democrat and just enough Republicans to pass (and perhaps to override a veto — which would be politically devastating for Trump), or whether it gets almost every Republican and just enough Democrats to pass. A few days ago, the Democratic bill to open the government without any wall funding got more votes than the Republican bill despite there being more Republicans in the Senate, a brutal message to Trump. It’s likely to play out similarly the second time, in part because a bill that will get a large majority of Senate Republicans won’t pass the House.

The real question is Pelosi. She has said that she won’t allow more than $1 for wall funding. She is lying — and everyone knows she is — when she claims to believe that a wall is “immoral” though I’m sure there are parts of the far-left Democratic base that do believe such a thing. Instead what she believes is immoral is doing anything that would take the boot off of Donald Trump’s neck.

Here’s her quandary: She has said that she would negotiate in good faith over border security once the government is open. Trump opened the government. The ball is now in her court. If she sticks with “no money for a wall” and the government shuts down again, she risks losing some of her political gains of recent weeks by being seen as the cause of a second shutdown. But how big is a risk is that, really? After all, it remains true that Trump said he’s responsible. And Trump caved once already.

Also, while there’s a lot of talk about Pelosi’s new radical leftist freshmen in Congress, all of whom despise Trump and a wall (because Trump wants it; not because they really think it’s the worst idea), Pelosi has to remember that there are quite a few new Democrats from districts which Trump won. Those people will want a deal that is more moderate, centrist, etc., with some wall money and also money for technology, immigration judges, etc.

A bill with some wall money would pass the House — but it will only come up for a vote if Pelosi wants it to. So how’s she gonna play it?

If she offers any wall funding (which I believe, as Trump does, is less than a 50/50 proposition), she’ll choose an amount big enough that Trump will have to sign the bill or take massive public blame for yet another shutdown, but not so big that he can claim an actual victory.

In other words, maybe she agrees to $1.5 billion for wall funding. Trump will probably be forced to sign that, but people like Ann Coulter will still slam him for getting such a piddling amount. And the Trump base will find their confidence in his abilities as a master negotiator further eroding.

Pelosi’s alternative is to continue doing what she’s already done — and how she’s already won: stick with “not a single dollar for a wall” with the goal of forcing Trump to shut the government down again (and assuming the public will blame him again), or forcing Trump to agree to a bill with no money for a wall, which I don’t think he’ll do, or forcing Trump to agree to that bill but declare a national emergency at the border and repurpose existing federal funding, such as from the Pentagon’s appropriation, to build more border wall.

The last of these is probably a better choice than another “shutdown,” but not much better, and I’m against it. We clearly have a serious problem, but not an emergency, at our border. Indeed, more Americans thought the shutdown was an emergency than think the border situation is. That gap will likely increase if people come to realize that Trump’s goal is only to add about 200 miles to an existing 700 miles of wall.

Public opinion overall is against the wall and against a shutdown or emergency declaration to get a wall. That said, Trump deserves credit for dramatically changing the public’s focus; immigration is now a much more important issue for many voters than it has been for decades. As someone once said, leaders don’t follow polls, they change them. So among Republicans and particularly among President Trump’s base (of whom he can’t lose even a small percentage if he hopes to win re-election), voters strongly favor the wall, supported the shutdown, and would support an emergency declaration — though by a decidedly narrower margin than Democrats would oppose it.

Some Republicans are following Daniel Horowitz’s lead in suggesting another legal path for Trump that avoids an emergency declaration and instead relies on a section of the U.S. Code regarding Defense Department authority to support infrastructure construction designed to impede drug smuggling. While data suggests that most drugs coming across our southern border come through existing ports of entry, hidden in vehicles or on persons, this path for Trump avoids the drama of an “emergency declaration” and may end up being his best path forward.

Where we have an actual emergency isn’t the border; it is a dramatically weakened military from years or decades of inadequate prioritization of spending. We live in a time of increasing provocation and competition from China, Russia, Iran, North Korea, and many Islamofascist non-state actors who wish us harm. Our Navy is too small. Unacceptably high percentages of our military aircraft can’t fly because of lack of upgrades and spare parts. Many Americans, not just defense hawks, will object to draining Dept. of Defense funds to build “the wall” even if it is proposed on the basis of black-letter law rather than just a cry of “but we have an emergency!”

Furthermore, if Republicans castigated Barack “I’ve got a pen…and I’ve got a telephone” Obama for continuing the dispiriting trend toward an “imperial presidency” and abuse of executive orders (something Trump campaigned against) because he could not corral a majority in Congress, they can’t credibly support Donald Trump for the same type of behavior. Again, going the route suggested by Horowitz negates this problem substantially, but not entirely.

AEI’s Marc Thiessen offered Trump some negotiating advice: Democrats want to oppose the wall while not appearing weak on border security overall. So Trump and Republicans could push for substantially more border security funding, even if without wall funding, and claim that as a victory for protecting the country. Thiessen describes this as a proposal that “gets 90% of what (Trump) wants but doesn’t include a wall.” That is an oxymoron. Far more than 90% of what Trump and his voters want (in this policy area) is the wall. That said, it’s disheartening to think that the best Republican strategy involves making government bigger and more expensive, and allowing Democrats to argue that they actually care about national security as much as Republicans do. You can practically hear Nancy Pelosi saying “Please don’t throw me into that briar patch, Br’er Donald!”