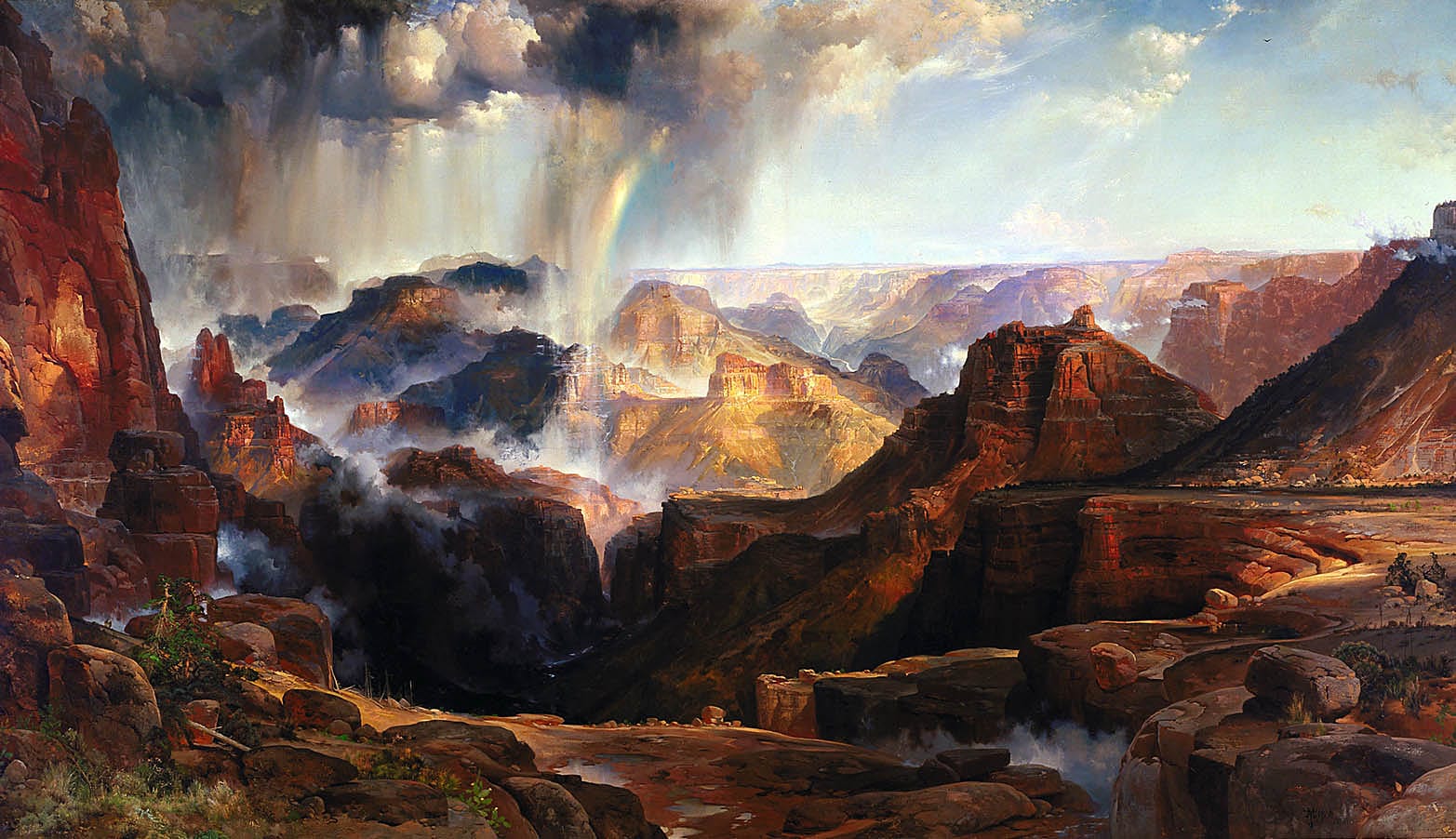 February 26 marks the centenary of Grand Canyon National Park, its designation issuing from the pen of President Woodrow Wilson in 1919. Coincidentally, the Grand Canyon’s great champion, ex-president Theodore Roosevelt — who had named the canyon a national monument in 1908 — had passed away only seven weeks before (January 6, 1919). The timing of Wilson’s action is interesting: Did he sign the designation as a tribute to Roosevelt’s memory as a conservationist, or withhold it so his most prominent political critic couldn’t take the credit? Maybe both.

A Spanish conquistador named Lopez de Cardenas, who was associated with Francisco de Coronado’s southwestern explorations, first saw the great canyon in 1540. Except for the local Indian inhabitants and the occasional wandering mountain man, the vast canyon went mostly unnoticed (the entire Colorado Plateau being a blank area on the map) until John Wesley Powell’s devil-may-care 1869 expedition descent of the Colorado River in dories. In his book The Explorations of the Colorado River and Its Canyons, he wrote: “You cannot see the Grand Canyon in one view, as if it were a changeless spectacle from which a curtain might be lifted, but to see it you have to toil from month to month through its labyrinths.”

Roosevelt was an early canyon enthusiast, first visiting when president in 1903, and before leaving office naming the area a national monument in 1908 using the executive powers inherent in the 1906 Antiquities Act. Upon his first viewing of the technicolor marvel of massive cliffs and spires, TR famously remarked: “Leave it as it is. You cannot improve on it. The ages have been at work on it, and man can only mar it.”

What the writer Edward Abbey (a frequent visitor) in his book Desert Solitaire called “Industrial Tourism” began during the pre-national monument days. Stagecoach travel on primitive roads started from Flagstaff in the 1892, and in 1901 a railroad line opened up connecting the canyon to nearby Williams, Arizona, though early on more revenue accrued to the railroad from transported copper ore than from tourist traffic. The early decades of the 20th century saw much political and legal wrangling between conservationists and mining interests, but national park status mitigated much of this conflict.

But it was America’s love affair with the automobile that opened up the canyon to the masses. Improved roads from Flagstaff and Williams permitted better access through the 1920s and ’30s. After a visitation lull during World War II, numbers boomed in the postwar years, and 1956 saw the first one million visitors- year. Twenty eighteen recorded six million people enjoying the grandeur of the Grand Canyon. Thirty miles of paved roads and interconnecting parking lots line the South Rim. Ed Abbey’s nightmare. Huge crowds are also noted at the neighboring Utah national parks: Zion, Bryce Canyon, Canyonlands, and Arches. Because of its small size, Zion is so overwhelmed that it is developing a future reservation system for visitation to ease congestion. The canyon country has certainly been discovered.

For those seeking a better degree of solitude, the Grand Canyon’s North Rim is open from May to November, and is accessible from southern Utah. Higher elevations and snow keep this vantage point closed all winter, but when open it is the less crowded option. The North Rim is popular for its vista-rich hiking trails: North Kaibab, Cliff Springs, Roosevelt Point, and Point Imperial, among others.

“Of all places on earth, the Grand Canyon of Arizona is the most inspiring in its pictorial possibilities,” wrote the landscape painter Thomas Moran (1837-1926) in a letter. One result of his legendary Western wanderings and multiple canyon visits was “The Chasm of the Colorado” (1873), which depicts the primeval scene shadowed by storm clouds, and hangs in the Smithsonian American Art Museum today. “Grand Canyon of the Colorado River” (1892) was a magnificent follow-up.

In his book Beyond the Hundredth Meridian: John Wesley Powell and the Second Opening of the West, Wallace Stegner describes the immensity of the canyon: “The Grand Canyon was beyond the reach of superlatives….” It was a “vast 217-mile avenue, a mountain range in a ditch, any of whose subordinate buttes is larger than the mass of any mountain east of the Rockies.”

For good or ill, Grand Canyon National Park has realized Ed Abbey’s prophetic thundering about tourism in the West. Mostly lacking wildlife as a tourist draw, Grand Canyon — unlike, say, Yellowstone — has marketed itself as a Disney-like experience replete with stunning vistas. There are buzzing helicopter tours probing the canyon’s depths; there are mule train rides up and down the Bright Angel Trail; and river outfitters guide rafts full of dazzled visitors down the silt-brown Colorado River as it surges along at the bottom of America’s billion years-old gorge. The thirty miles of road along the South Rim are handy for shuttle bus touring. And for the not-so-faint-of-heart (and an $80 ticket price) there is the glass walkway built in 2007 that extends out over the abyss, creating the illusion of walking on air. The Grand Canyon is a year-round spectacle of animated — and sometimes scary — recreation.

Though some beautiful architecture is seen as a compliment to the natural grandeur. The El Tovar Hotel was designed by Charles Whittlesey and built in 1905 on the South Rim. Other sites are the Hopi House, Desert View Watchtower, and the Phantom Ranch compound, which is on the river at the bottom of the canyon. These three, plus more, were designed by Mary Colter (1869-1958), a prominent architect in a time when few women were trained in the art. Employing rustic and Native American motifs, she created what we can today call the “Southwestern” style of architecture.

The Grand Canyon is indeed a billion years old. From a geological perspective, its multi-hued layered strata are immense, not measured in centuries or millennia, but in periods of geologic time contemplated by scientists, and only truly understood by its artist, God Himself.