You’ve surely heard the information presented here, right? Or, given the inane visual and rhetorical campaign promoting windmills and solar panels to reduce our dependence on foreign oil — because, you know, the menace of all of those (foreign-) wind- and solar-powered cars…er, …because we get electricity from burning oil…or, something — you’ve seen this in stories about windmills just as you recently were inundated with snaps of the oil-covered pelican? 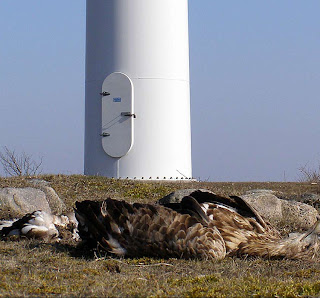 There are plenty more where that came from. And as one fellow just emailed me, with an amazing series of photos of wind turbines ablaze:

There have been at least 152 [fires caused by turbines] to date. Sooner or later, forest fires are bound to be caused by burning wind turbines. Some may have occurred already, and the cause covered up – politically correct oblige.

Given the obsession with the media portraying any downside of energy sources that actually work, and provide that which in fact makes us richer, freer and safer, just consider these things when you read about the sunshine and lollipops that await us if only we would get beyond our fear of success and leap forward to the future to relying on inefficient, uneconomic, and yes ecologically harmful windmills and solar panels. The stuff we abandoned when we learned to liberated even better energy.

Coal saved the forests, petroleum saved the whales and all hydrocarbons saved an awful lot of birds.