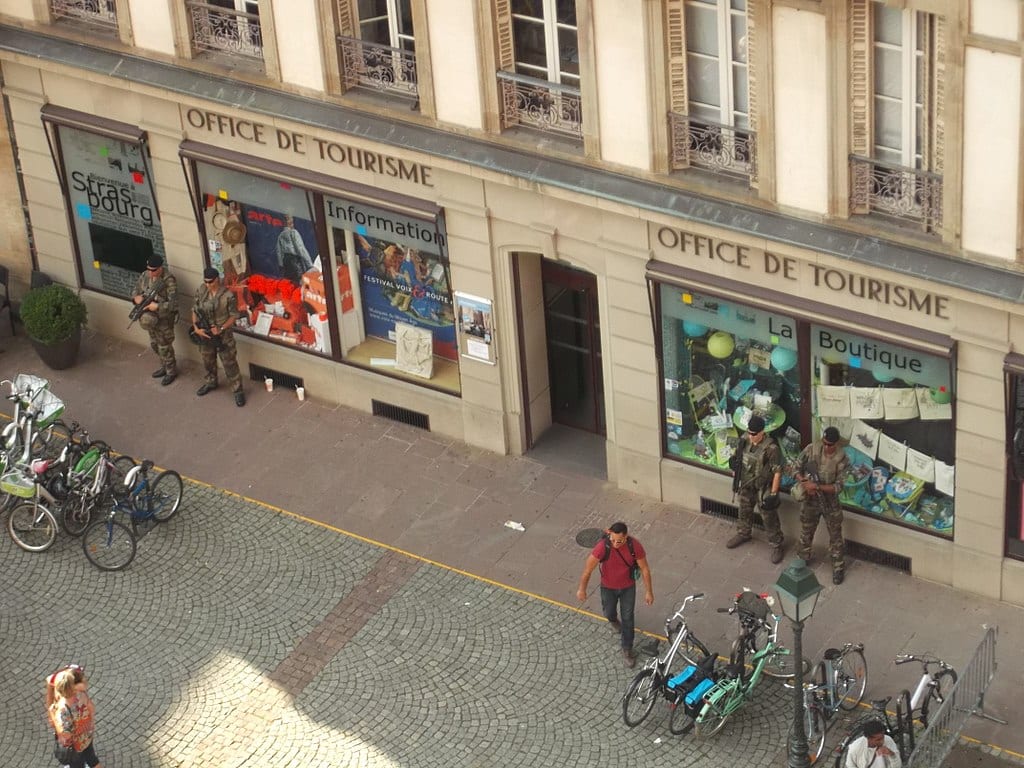 “They had to shoot back.” Laconically, the Interior Ministry reported why the life of Cheriff Chekatt, 29, ended Tuesday night on a street in Neudorf, a Strasbourg neighborhood not far from the Cathedral Square where a day earlier three people were shot dead by a man with a gun and the words Allahu Akbar on his lips.

The cops said that an investigation would determine if they got the right man. The one they got shot at a patrol when asked to halt. Close to a thousand policemen were engaged in a manhunt since the shooting, some fears were expressed that he had made his way over a bridge to Germany; German cops too were mobilized.

In a way, the crime and its aftermath encapsulates what Europe, the union, represents. The suspect, Strasbourg-born of Moroccan parents, would have got across the border without formalities; but the police forces on both sides work together as a matter of routine. Risks; benefits. Taxpayers are rarely consulted.

Chekatt, a career criminal before his 30th birthday, had been sent back to France from a German prison after serving a sentence for robbery. He had done time in France as well, and had a police record in Switzerland. He was known to be a habitual delinquent, but also a politicized one: he had found religion in jail and was known to have contacts with radical Islamists. His name was on the S-file, a list of individuals of varying concern to the police.

According to a former Minister of the Interior, there are about 20,000 S cards. Full time surveillance is not realistic. A career criminal, who has done his time and is a French citizen, can expect a certain amount of privacy. The attack was carried out with a handgun and a hunting knife; more weapons were found in Chekatt’s flat before he was apprehended and shot.

The S-file worked to the degree that police were able to very quickly identify a credible suspect, on the basis of witness statements at the crime scene, and launch a massive search.

Moreover, the Cathedral Square was not unguarded. Police were present and there was, in fact, a shootout from which Chekatt, or an individual believed to be Chekatt, escaped, on the night of the shooting, Tuesday.

The perp chose his venue well. Whether because he was told to go there — the Islamic State claimed the attack was by one of theirs — or because he had a sense of its importance on his own, the Christmas Market is a high-value target. It has been a place of piety and trade — that is what pilgrimage destinations usually are — for over five centuries. In recent years, aided by prosperity, improvements in transportation (including high-speed rail), and the ease of movement through Europe, the month-long Market has become perhaps the major tourist destination in Alsace, drawing two or more million visitors.

Beyond tourism and trade and piety (there is a huge Christmas tree of course and the celebrations of Noel in the Cathedral and the other old downtown churches), Strasbourg represents another soft target. It is one of the centers of Europe, seat of the Euro-Parliament, the Council of Europe, and the European Court.

Neither Jihad Central nor a lone wolf terrorist, if such the suspect is, could miss the symbolic significance of a strike at the heart of Strasbourg. A blow here tells France, and Europe, that Christendom is the target. It does not matter if Christians do not realize this. Like it or not, know it or not, they are the targets.

As is Europe. It will not help to say that Europe welcomes all, without regard for race, color, creed, gender — the other side is not buying. And the liberal welcome will only invite contempt and more violence.

France’s year ends on a disastrous note. The economic damage done by several weeks of traffic jams and rioting and looting in shopping districts in many cities may recede in the wake of the shock in Strasbourg and the president’s capitulation to the eco-tax that provoked the disturbances.

Something may come of this, a sharper sense of national priorities and a deeper appreciation of what really needs defending. The environment matters, but maybe it is a topic that can be discussed without raising a storm.

Purchasing power is important, of course, and governments are well advised to weigh carefully what tradeoffs they propose as between taxes and subsidies.

Security — national security and the safety of individuals — is fundamental. President Emmanuel Macron capitulated to the tax rebels, known as gilets jaunes, the day before the Strasbourg attack, at the cost of busting his budget, which is set according to European Union criteria.

Gouverner c’est choisir (To govern is to choose), observed Pierre Mendes-France, one of France’s reformers. The time of choices is before France’s leaders — and people.