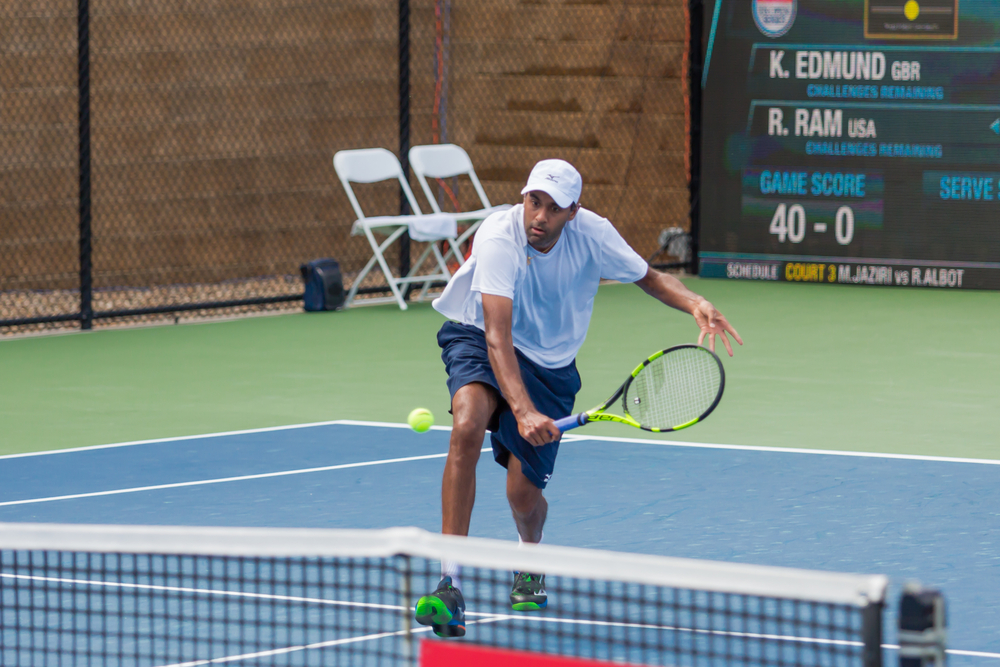 Look at it this way: Rajeev Ram is a great American tennis player and success story. A fine college tennis player in his native Indiana — could it be a coincidence, son of immigrants from India? — he turned pro and did okay but not great on the tour playing singles, where The American Spectator first covered him when the Washington Open was still the Citi Open (actually it still is) and was still run by the legendary Donald Dell (which it no longer is).

Actually in real fact Ram was born in Colorado, but he attended Indiana University, like Messrs. Tyrrell and Pleszczynski, both fine athletes in their boyhoods and youth. That is a stretch, however, because he went to the University of Illinois. But when he turned pro he took advantage of a deal the ATP has with certain colleges and was able to complete his degree at Indiana University East while on tour.

The ATP is big on education. It makes sense — across all sports — for the big leagues to pay young men and women to stay in school. If they did that, the schools themselves would not have to come up with these mercenary schemes, and while they are at it they could stop depending on sports for their money.

Mr. Ram began to specialize in doubles and did fantastic, grand slams and all, in men’s and mixed at the Australian Open (partnering with Joe Salisbury and Barbora Krejčíková, who won the French Open in singles just a few weeks ago) and much besides. So this year at Wimbledon he is highly seeded in both, with Salisbury in the men’s doubles and the wonderful Bethanie Mattek-Sands, herself a great American return-from-career-ending-injury story and also a doubles Grand Slammer, or slammerette; indeed, one of the greatest, as she has won everywhere but at Wimbledon.

Reaching the semis at Wimbledon, seeded sixth, Ram and Salisbury were up against the top-seeded Nikola Mektic and Mate Pavic, Croatians — like Tito. Josip Broz Tito, I mean, not the Texans who make a pretty good brand of vodka. These Titos have nothing to do with Croatia. They are Texans, and Tito is a nickname given Bert Beveridge, who is a San Antonio native who studied geology at Vanderbilt and the University of Texas at Austin and found an ingenious way to combine his science with an excellent drinkable — if risky — beverage. He, too, is a great American story. Broz Tito was a communist who defied Stalin but was unable to put to rest the specters of Serbian nationalism.

All this is neither here nor there, but it would appear that Ram, a charming and handsome and tall man with a great big serve and volley game — he stands six four and puts his reach to good use at the net — decided to forfeit the mixed round of 16 to save his energy for the men’s semis, scheduled the same day.

Now I am not sure this is true. If I see Rajeev Ram at the Hall of Fame in Newport, where he is a past champion in both singles and doubles, or at the Citi, I will ask. Maybe it was Salisbury’s idea. Maybe it had nothing to do with either one of them; something happened that forced their hands. I would like to hear from Mrs. Mattek-Sands as well. What did she make of being stood up on her chance to get a career Grand Slam in mixed? They may avoid controversy by declining to discuss the matter, and I respect that, after all, as Naomi Osaka says, “It’s okay not to be okay.”

Privacy and your own space and all that, though I cannot see why if we worry about Google and the others knowing more about us than we and our parents and wives and sweeties do, we should not worry about — and object to — the endless, pernicious, vile voyeurism of journalism, a very bad trend. But keep in mind being okay can extend into the moral life, the obligations we have to our side, our codes of behavior, our very civilization.

Mektic–Pavic beat Ram–Salisbury in four sets, Wimbledon being I believe the only tournament outside the Davis Cup where gentlemen’s doubles are still contested in best of five matches. Well, we know what has happened to the Davis Cup, laid low by too many people wanting their okay to overrule the okay of one of sport’s classic institutions. If it is any consolation, it must have been a pretty good match, with three of the four sets requiring tiebreaks.

Due to my esteemed hierarchical superiors never having put the arm on Boris Johnson — a fine tennis writer — to get me an in to the All England Club, and this despite I was the one who urged Mr. T. to start a draft-Johnson movement when he was still a U.S. citizen, which might have spared us what we got, I never saw nothing, at least not live. So I cannot say I know the facts.

But, as a matter of moral speculation with no innuendo about nobody, let us posit that we are in the same dilemma. What would Jesus do? No, I mean, what would you do, what would a normal Americano do? Would he go for the trophy in the higher-valued gentlemen’s doubles draw, or would he do the chivalresque thing and play one with and for the fair lady?

Could it be Rajeev — and Joe — felt the sting of having let the lady down and blew it to those young post-Tito Croatians? Karma is a foreign term, but useable. Roger Federer, best tennis player of his generation, dropped out of the French Open while ahead, on the grounds he had to save his body for the Championships, his favorite tournament. He said sorry, Paris got to run. He lost at Wimbledon in straight sets — to a very good player for sure, Hubert Hurkacz, but who really beat whom?

The sport, greater than you, has its demands, too. You let it down, well, maybe you pay. As can happen when you offend a lady.

’Tis one to ponder.