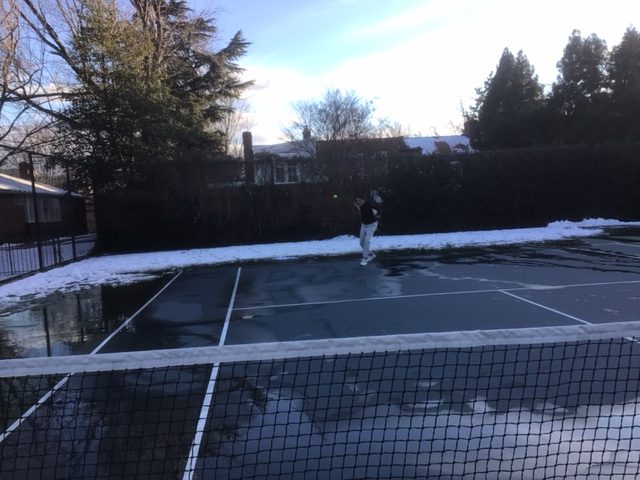 It is okay to vary routines, so long as they do not undercut the goal, which is to stay warm, fit, and stupid. Roger’s Own Remedy is case in point, seeing as how the variations have a pernicious way of taking over. As soon as any Tom, Dick, or Harry (with no prejudice to the Toms, Dicks, and Harrys who may be reading this, notably the ones I know and who know I know) calls and says, “Wanna hit a few?,” which is the racquet man’s equivalent to the Bernie Wooster “What, ho!,” I find a philosophical rationale for footing it to the courts instead over the nearby bucolic paths and I also argue (to my better angels) that whacking a fuzzy ball is just as good for the arm and upper body and shoulder as a push-up, which while not a brazen lie is incorrect and self-deceptive.

That is the problem with humans: they are weak of will, and that is why just a few streets away in D.C., the people’s representatives are preparing to beggar our currency yet again with inflationary, demagogic, and counterproductive mass welfare, due to health and economic crises they themselves helped bring about. It is incomprehensible to me why principles as well as the common sense borne of historical experience collapse so easily in democratic regimes, but the truth is that my own “make an exception and hit a few instead of the usual workout routine” is the obvious clue.

My tennis partner R.C., after years of service in the Navy, has become a tennis enthusiast, with an unforgiving all-points attack game, and while I am not obliquely calling him an enabler, he is the first one out there as soon as the mercury is just a degree above freezing and the last one gone when it hits tropical extremes. Which occurs to me because first of all the Australian Open is scheduled to begin just after the Super Bowl, barring another virus panic down under (which is to say well under the tropics, but they call it summer), and second, my better half, or better three-quarters as Larry Thornberry points out, is in fact in the tropics and she complains (by phone) that it is too hot to work, let alone play tennis. “We get up before dawn, quit well before lunch, and can’t go back to work until dusk,” she reports.

“Wish I was there,” says I, but instead I join R.C. with broom and shovel to clean up the Rose Park courts, and to be honest, we did not do a bad job. That was a few days ago after the allegedly heavy snowfall came down, which in fact was ridiculously light, but in Washington these days they will use any excuse to make people feel the end is nigh and therefore we must spend a few billions of our children and grandchildren’s money, and no one, neither Democrat or Republican, suggests just slashing the federal budget by two-thirds, by way of setting an example of civic solidarity.

But go figure. Meanwhile, among the pros, the legendary Martina Navratilova, taking note of the new president’s position on Title IX, suggested a “carve-out” in the bill, which proposes in effect to encourage non-females who claim to be female to participate in female sports in schools and colleges. The “carve-out” would protect pro female athletes, or what the finest tennis player (female) of her day calls elite athletes.

Interestingly, this was received rather more gently by the no-gender party than Martina’s original position, a year or two back, which was to flatly oppose all confusion of a s*xual nature in sports and, implicitly, in general. You are what you are, was her position, which gave her cause to be upset when the greatest Australian tennis player (female) of all time, Margaret Court, stated, in essence, that is right, and you, Martina, are leading young women astray by being out of the closet about it. Admittedly this was not tactful, but Mrs. Court is a fire-breathing Christian pastor, and her defenders say she has a right to her opinions. There was a movement, which both Miss Navratilova and the American legend (male) John McEnroe endorsed, to change the name of the Margaret Court Arena in Melbourne Park, but this fizzled out.

Miss Navratilova, some say, undercut her own position by saying it is okay for girls and young women to have to follow Biden’s new Title IX rules, but not for us elites. Why not? After all, she appreciated the coaching Renée Richards — born Richard Raskin — gave her as a Wimbledon champion. A one-time Yankees prospect, Raskin was a brilliant student, served in the Navy, became Richards, and, as such, a top tennis player, and after that one of the finest doctors (medical) in New York. But Dr. Richards has admitted to doubts about the fairness of her tennis career, noting that she had an unfair advantage.

The courts were pretty slippery by the time R.C., with a little help from me (I overslept, and also I was into my layers routine, which involved cotton and wool this time, plus my softball pants), got two courts in fair playing condition, enabling a pair of charming young lassies to get on. As they started while we took a sip of spirits or water — I forget — we saw they were fantastic players, surely on some varsity team. “They could beat us,” he said. “Of course they can,” said I. “They are close to the pro level. But does that mean they could beat top boy athletes who, who — you know.” I am a terrible prude, I must admit.

“It would not be fair, would it?” said R.C. Though he votes Democratic, he is a mensch, as well as an old Navy salt, and he knows what he knows. The balls quickly got soggy. They skid low and treacherously, fine if you want to practice your grass-surface skills, but which neither one of us really wanted to since there are very few grass courts around here. The advantage is that the bounce is slow, which gives you time to reach it, but usually your feet are all over the place because you are slipping. So there is both good and bad, as in Congress. The girls did not seem to be bothered in the least.

Another pal came by and took R.C.’s place for a while, and then I gave my side to him and they hit a few and we kept going and it was a good workout, and those girls were really something. It would be a shame, you know, to spoil their fun. The best way might be to simply stop providing any federal money to schools. But a lot of people are hooked on that. That will do it, and it is not something the Founders did not predict.