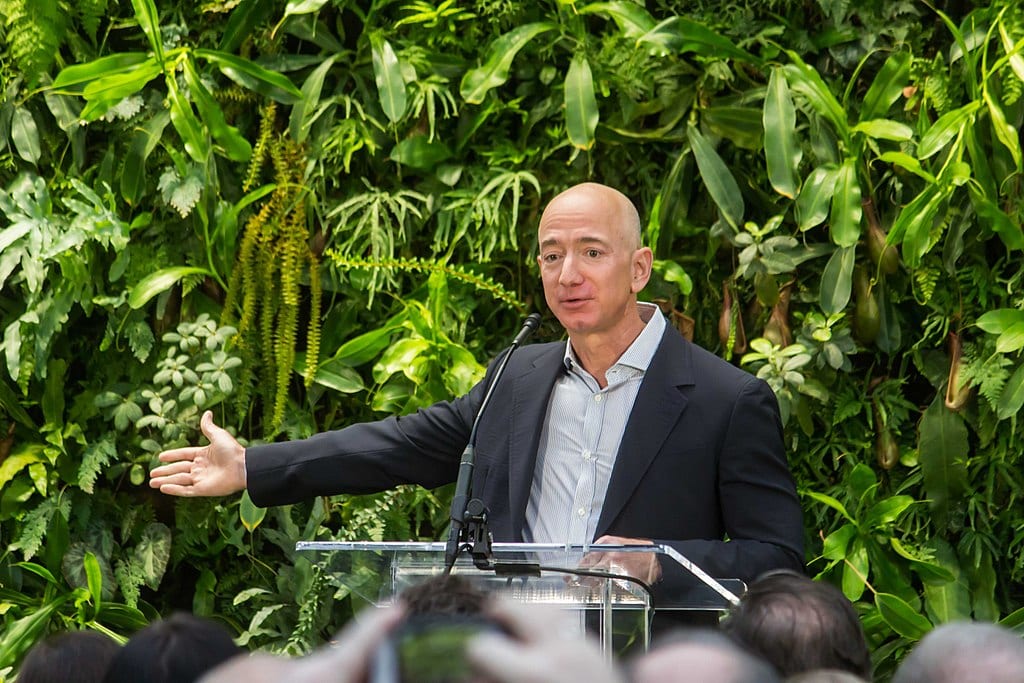 In a year that has put the untenable practices and politics of Silicon Valley’s tech barons under scalding sunlight, Amazon’s Jeff Bezos has come in for a particularly nasty set of burns. Just to remind ourselves, let’s count them:

First, President Trump is incensed at Bezos over his ownership of the Washington Post, one of the most relentlessly partisan papers in today’s news environment, and which the president regards as merely an “expensive lobbyist” for Amazon’s interests.

Second, Trump is furious at Amazon itself, for its capacity to drive out brick and mortar businesses, and for its favorable treatment by the U.S. Postal Service.

Third, Amazon has repulsed government accountability crusaders, with its flagrantly corrupt and arguably illegal attempt to rig the process by which a massive Department of Defense cloud computing contract was set to be awarded.

Fourth, the jaws of antitrust regulation are closing on tech in general, with Amazon most likely to be a future target as the Trump administration gears up to enforce those regulations on its brethren at Facebook and Google.

With a list of threats like this, one can imagine that Bezos might well be desperate for some good PR, and really, who could blame him. Which is why Bezos apparently decided to make the classic move faced by all embattled corporate titans and donate a huge chunk of his own cash to the most sympathetic set of targets ever, namely children. Thus, the AP reports that Bezos plans to donate $2 billion of his $160 billion fortune to opening free preschools in low-income communities, modeled on the Montessori schools of Bezos’ youth, where, as Bezos’ apparent mission statement bizarrely puts it, “the child will be the customer.”

Hold your laughter, please. Obviously, the idea of preschools treating children as customers, rather than charges, conjures ridiculous images of teachers being fired to make room for endless new supplies of toys and junk food. One suspects, however, that this is not what Bezos is out to achieve. In fact, Geekwire confirms as much — when Bezos says that he wants the child to be the customer, he apparently is thinking in the same terms that drove Amazon’s expansion: namely, how do we make kids want to learn, as much as Amazon makes people want to consume. Again, quoting Bezos, “We’ll use the same set of principles that have driven Amazon. Most important among those will be genuine, intense customer obsession.”

Now, to many parents and education reformers, this may sound like a good idea. If kids can be made to treat learning the way most of us treat binging an Amazon Prime show, then surely this is the way to a more educated populace, in general. And certainly, if such teaching methods can be pioneered, their adoption is not necessarily dangerous.

But there is a downside, and it is one that gives a sinister sheen to Bezos’ efforts, and potentially to any other big, game-changing educational projects by today’s tech industry: if such teaching methods can be discovered, they could theoretically be used to teach people, and especially suggestible little children, anything. And, with Bezos having pioneered the method by which those teachings can be filtered down, does anyone really believe that he won’t insist on creating the default curricula to be used in his schools and, eventually, in other schools that imitate his method of “obsessive” learning? For subjects like math or computer science, this would probably be harmless. But for English, social studies, or history? Does anyone really want their children shuttled into schools whose curricula were designed by a man whose online store has begun banning books on guns? What are the odds that Second Amendment rights get any billing in Bezos’ schools, versus the far Left interpretation that those rights only apply to members of militias? What are the odds that a company that bans books, period, will encourage children to actually learn for themselves, rather than just consuming whatever spoon-fed diet of information the company chews up and feeds to them like the most Orwellian mother bird?

In fact, would this not be an engineering coup not just for Bezos, but for tech companies generally? The terror among tech’s Snowflake Barons about the prospect of “radicalization” (i.e., unlicensed education in facts the Left finds inconvenient) happening through, say, dissident YouTube channels. With education reduced to consumption, will the tech titans not simply be able to make it so young children are brainwashed from day one not to ask the sort of questions that would lead them to disagree with tech’s favored policies? Why would you need to shadowban anyone or deplatform anyone when an entire generation doesn’t even know how to begin looking for answers for itself?

In other words, Bezos’ $2 billion education donation should be seen not as a philanthropic gesture, but instead for what it is: a power grab done seemingly for the purposes of education, but in fact more likely to result in the perfection of a method of youthful indoctrination. Parents in the “low income neighborhoods” where Bezos begins his tinkering should remember this, and be wary of the nice Amazon employees who come calling asking if they want free preschool. Tech is coming for your kids, first as guinea pigs, and then as sheep. As the product of years of homeschooling myself, I know only too well that the only way to stop such plots is to just say no.