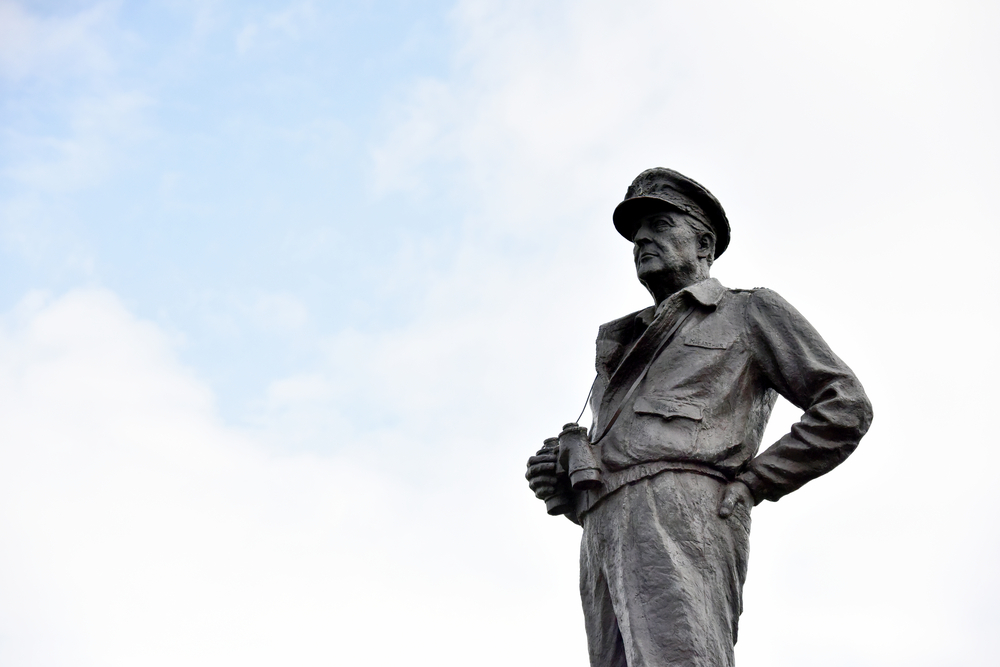 It was a pleasure reading about strong and competent leadership brought to bear when it was absolutely necessary. But I couldn’t avoid a tinge of sadness as well when realizing that, while we’re now in perilous times again, leadership, political or military, is almost totally absent.

In Team America, author and military historian Robert L. O’Connell gives us a group biography of four U.S. Army generals who played vital roles in leading America to victory in two world wars and, at least in the case of two of these, in helping shape the brave new nuclear world we live in now. He calls the four “the greatest group of generals ever to serve together in the U.S. Army, maybe in any army, any time.” O’Connell makes a good case for this.

Compare the performances of giants like George Patton, Douglas MacArthur, George Marshall, and Dwight Eisenhower to their current counterparts — thoroughly modern Gen. “White Rage” Milley, Secretary of Defense Lloyd Austin, and service secretaries — who seem more concerned with climate change and “right wing extremism” in the ranks than in dealing with our nation’s strategic adversaries, and the sadness is understandable enough. It now seems that civilian control of the military, absolutely necessary in a free society, has morphed into high-ranking military officers hauling water for the domestic political agendas of the administrations that appoint them.

Along the way of telling both the military and personal stories of the four generals from cradle to grave, O’Connell weaves these biographies into a history of America and the world in conflict from early in the 20th century to the end of the Eisenhower administration. It’s a huge canvas, clearly and economically rendered by O’Connell in just 485 pages of text.

O’Connell holds a Ph.D. in history from the University of Virginia. But don’t let this deter you — you’d never guess it. Unlike most Ph.D.s, he writes clearly and concisely, sometimes entertainingly. He doesn’t burden readers with academic theory and doesn’t ride his own political hobby horses. He has a feel for the important detail and for how the personal, political, and strategic work together. Much of what O’Connell relates in Team America is known, especially to history and military buffs. But the book serves to bring so much of this together and to show the moving parts.

The four central characters were all born late in the 19th century, and all achieved military immanence through competence, hard work, ambition, and the ability to understand both the individual soldier and how vast armies functioned and fought. But they were all very different kinds of people. Patton came from one of the richest families in California, and his ancestry includes officers who served in the Revolutionary War and the Civil War. He never wanted to be anything but a warrior, and as a believer in reincarnation was convinced that he had been many times over in the past. Eisenhower came up poor in hardscrabble Texas and Kansas and thought of West Point only as a free college education. He only later reconciled himself to the profession of arms and never really became comfortable with the mass death that came along with this career.

MacArthur, a military brat, also had military ancestry to live up to, his father, Arthur MacArthur Jr., being a Civil War hero who later achieved the rank of lieutenant general. George Marshall, son of a steel industry executive in Uniontown, Pennsylvania, graduated from Virginia Military Academy, the only one of the three not to attend West Point. Of the four, only Patton and MacArthur made it to a battlefield, and those two distinguished themselves there. Marshall and Eisenhower were staff officers. They produced, directed, orchestrated, and assembled the armies while keeping the allied leaders, as far as was possible, on the same page.

Our generals’ personalities varied as much as their biographies. Patton, the best pure warrior of the lot, tended to be loud, assertive, and often vulgar. He was incisive on the battlefield and an unguided missile off of it. Eisenhower made good use of a sunny disposition in his dealings with others. He had a temper of his own but knew how and when to keep it under wraps. A keen poker player, he knew how to read others and when to bluff, and he was often not entirely what he seemed. Marshall, the lowest of the four in personality quotient, was a borderline cold fish who made his way by pure intellectual power rather than by charisma.

And then there was Douglas MacArthur, a capable general but with an ego larger than some of the closer planets. He never seemed to have entertained a self-doubt and was as politically tone-deaf as one could be. Toward the end of his career, he seemed to inhabit a reality parallel to that of the rest of the world and was finally done in by a decidedly unmilitary habit of insubordination to civilian authority. MacArthur was good at cultivating the press and was well treated by them, so he was always popular at home. This accounted for the fact that President Truman didn’t fire him any sooner than he did.

O’Connell’s book is a tribute to these four men. But it’s not hagiography. All four had flaws and made some wrong decisions, and O’Connell does not shy away from these. All save Marshall, the squarest of the four, had things in their personal lives that wouldn’t pass the Norman Rockwell test. (O’Connell doesn’t go prurient with these, but at least once, in the matter of Eisenhower and Kay Summersby, he comes close.) But what these men did right more than justifies our attention to them now.

Of the four, Marshall and Eisenhower had talents that led to significant contributions after their military days were over. Marshall served ably as secretary of state and authored the Marshall Plan, a postwar economic bailout that saved a broke and exhausted Europe from collapse. This fetched him the Nobel Peace Prize.

Eisenhower’s fame and political skill took him all the way to eight years in the White House, where he worked to keep America safe in a world where an aggressive adversary possessed nuclear weapons, the use of which was and is unthinkable. And those who believe that Eisenhower was lacking in political skills and only wound up in the White House because of his military record will learn otherwise. I’ve always been amazed at those who fail to recognize that keeping the leadership of allied countries working together throughout an entire world war is a political feat of the first order. And Ike was also far more of a hands-on president than many believe.

Peace is always an uncertain business in a world where conflict is the norm. But these four men did much to bring it about by helping put an end to the worst and most destructive war in history. Marshall and Eisenhower helped maintain the peace in a Cold War world that could have gone hot at just about any time. O’Connell has provided a service in laying out in full these men’s great contributions.

O’Connell’s other books include Revolutionary: George Washington at War, Fierce Patriot: The Tangled Lives of William Tecumseh Sherman, and Of Arms and Men: A History of War, Weapons, and Aggression.