Abby Johnson, a former Planned Parenthood director addressed the March, speaking on her experiences that led to her shift to the pro-life cause.

Johnson has a film titled Unplanned that will tell her story, see it March 29th.

Johnson also celebrated her organization, And Then There Were None, which has helped around 500 abortion workers exit the industry.

This year’s March for Life held an unexpected surprise. Very few, including MFL staff knew that Vice President Mike Pence and Second Lady Karen Pence would be attending the March for Life Rally in person. Pence had already spoken via the phone with Ben Shapiro, but arrived about an hour later to raucous applause. Pence once again highlighted the pro-life accomplishments of the Trump administration, and the importance of religious freedom, including for his wife who teaches at a traditional Christian school.  Pence encouraged marchers to remain resolved despite opposition from many other Americans.

Additionally, here are some the March’s greatest signs: 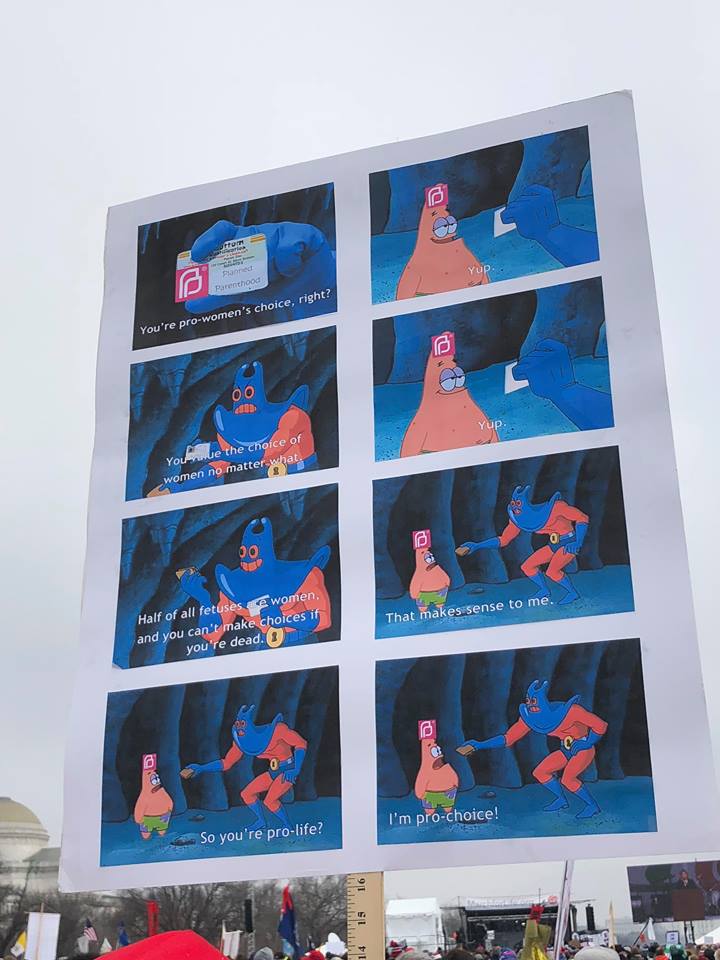 Planned Parenthood is about as intelligent as a starfish. 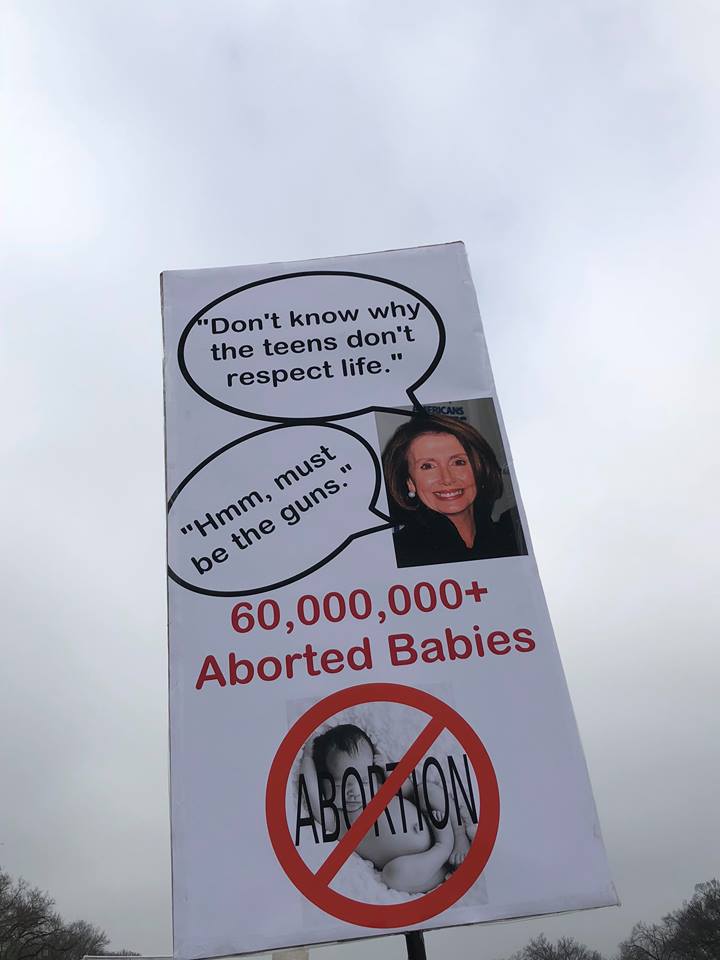 Pelosi couldn’t make it to the march, her flight was canceled. 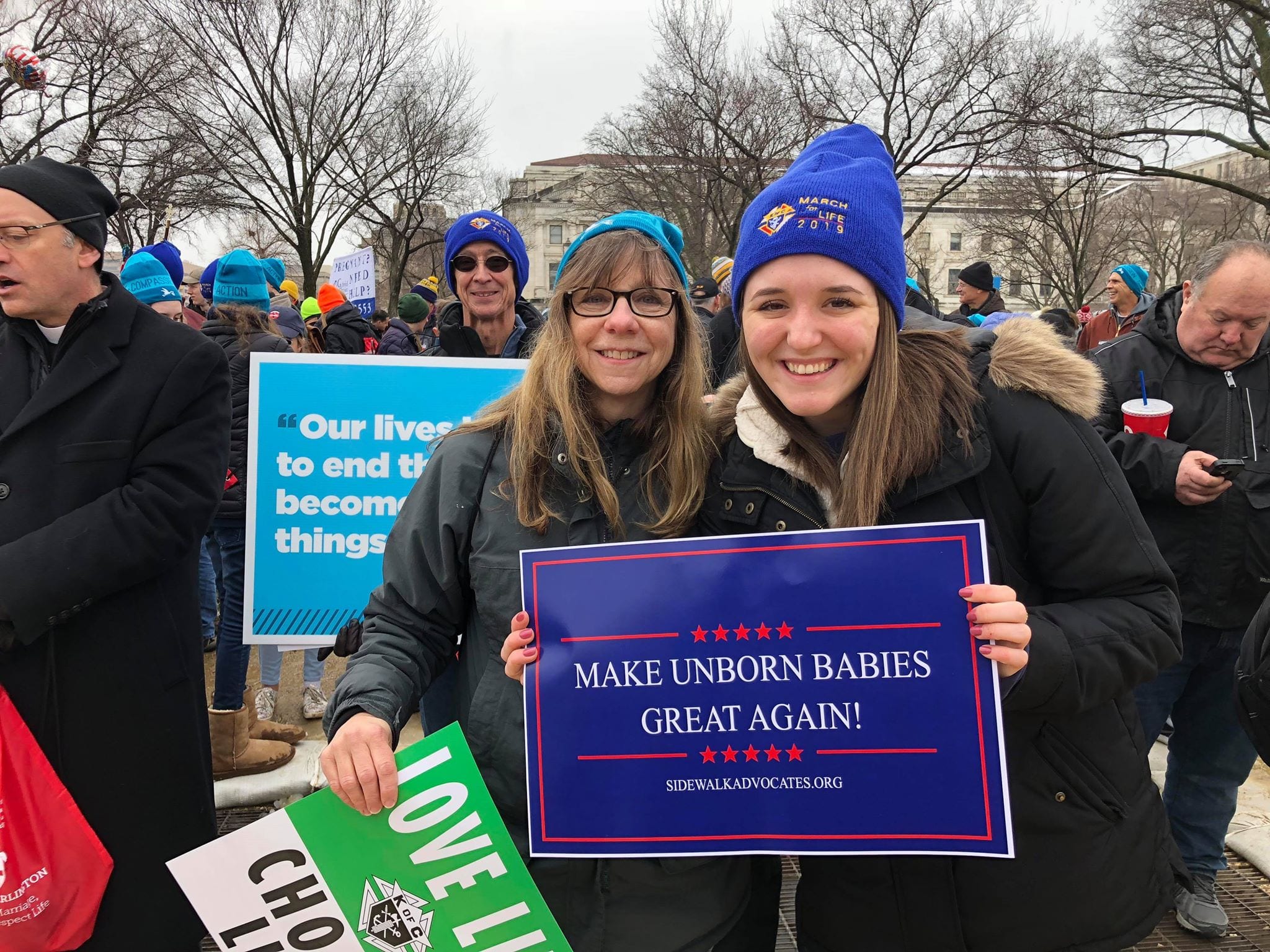 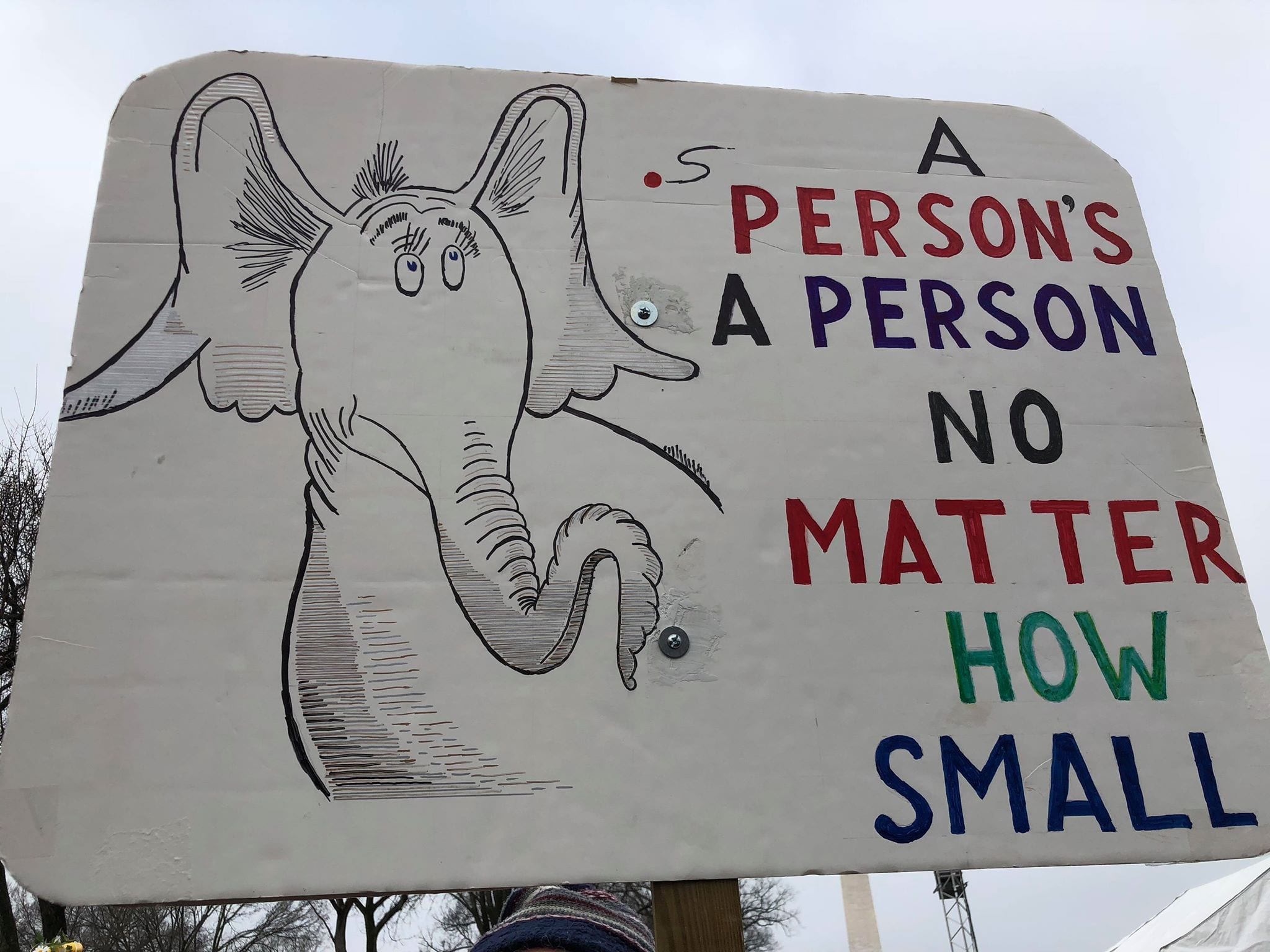 A message from Horton 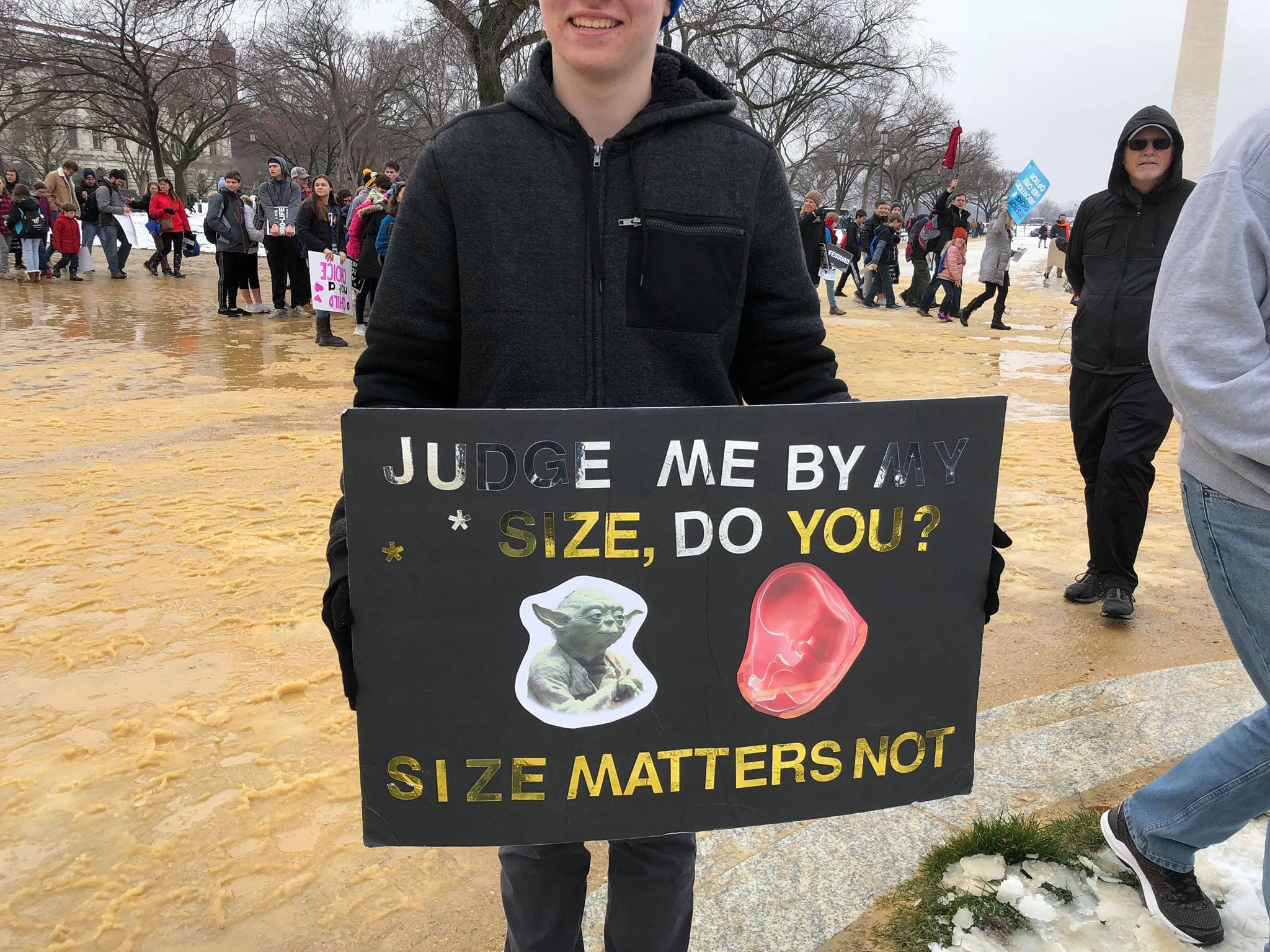 This one knows the force. 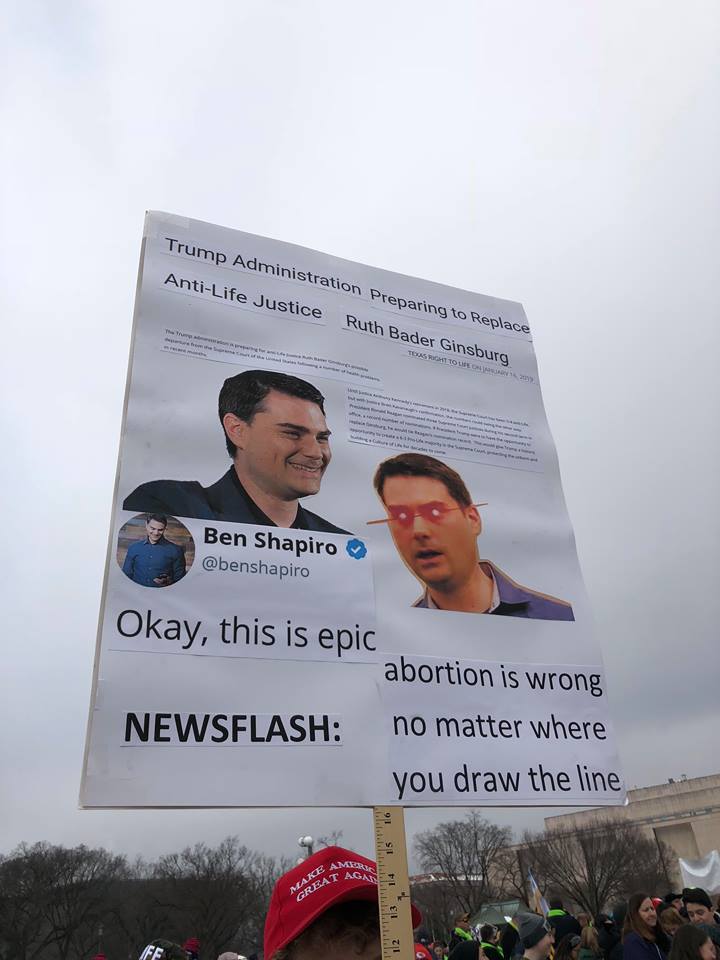 Two former abortion workers explained their reasons for shifting pro-life. One was a director at the largest Planned Parenthood in North Carolina, she was fired due to not meeting abortion quotas, she was not pressuring women into having abortions. After she was fired she explored the issue and became pro-life. Planned Parenthood continues to deny that these quotas exist but many former workers cite them. More can be read about these quotas at Washington Times, Alliance Defending Freedom, and the Washington Examiner.

Another was a former worker at Kermit Gosnell’s clinic who became pro-life after she witnessed the abortion of a 29.4 week old baby, known as Baby Boy A in the trial that sent Gosnell to prison for life.

Shapiro also refuted the idea that abortion has decreased crime in recent decades, information on this largely debunked theory can be found at ABC, Vox, and Human Life International

Shapiro brought in Vice President Mike Pence via phone call. Pence was enthusiastic about the march and said he believes the abortion issue will be resolved within our lifetimes. He also touted the recent victories against Planned Parenthood, such as the Texas Medicaid decision. He also cited President Trump’s selection of Justices Gorsuch and Kavanaugh, as well as many lower level judges, and the end of the Mexico City Policy.

Friday marks the 46th annual March for Life, when thousands of pro-life activists and advocates march from around the country descend on Washington, D.C. to support the repeal of Roe v. Wade and America’s pro-abortion culture.

Each year the March for Life has a theme. The theme last year was “Love Saves Lives,” focusing on choosing life over convenience. This year’s theme is “Unique from Day One,” which focuses on the scientific case that life begins at conception and that a fetus is a separate human being before it is born.

There will also be representatives from religious organizations in attendance, including the Lutheran, Orthodox and Catholic Churches, as well as many evangelical groups.

Think Tanks and policy groups that are supporting the March this year include The Heritage Foundation, Biking for Babies, and Live Action.

Americans are starting to wake up to horrors of abortion when they are presented them, in media and with the facts, and abortion numbers continue to decline.

Despite the progress, pro-life advocates see a need to continue the March until legalized abortion on demand comes to an end.

Usually, attendees of the March for Life also enter the halls of Congress to make the case for life to their Representatives and Senators, but with the government shutdown this will likely not be as pronounced. A government shutdown and cold weather will not stop the passionate pro-life activists that will be filling Washington on Friday.