Back in the seventies and eighties, the Big Three, aka GM, Ford, and Chrysler, experienced difficulties with the auto unions. The unions, irritated by this or that perceived slight, would engage in slowdowns, strikes, and shoddy workmanship that sabotaged buyers and thus, created brand problems for American companies just as foreign automakers made big plays for the United States market.

The unions were shortsighted. They saw the layers of management bloat and flush expense accounts and assumed that the gravy train didn’t stop enough at Union Station. So they rebelled.

When gas lines grew, demand slowed, and line workers were furloughed at 90% of their pay. Machinists were paid to sit in rooms and play cards. Steel workers were hardest hit. Car companies capitulated to the unions because they hated being the bad guys. They were stuck. What would they do without them?

At the same time as Detroit’s slump, foreign competition grew fierce. Japanese car companies upped their game. The old “rice burners” gained a foothold. Steel prices plummeted while the quality of foreign steel increased. With American car companies cranking out crummy vehicles, owning a Japanese or German car stopped seeming like treason and became a sensible choice. The unions didn’t realize that by sabotaging the “suits'” earnings, they were sabotaging themselves. 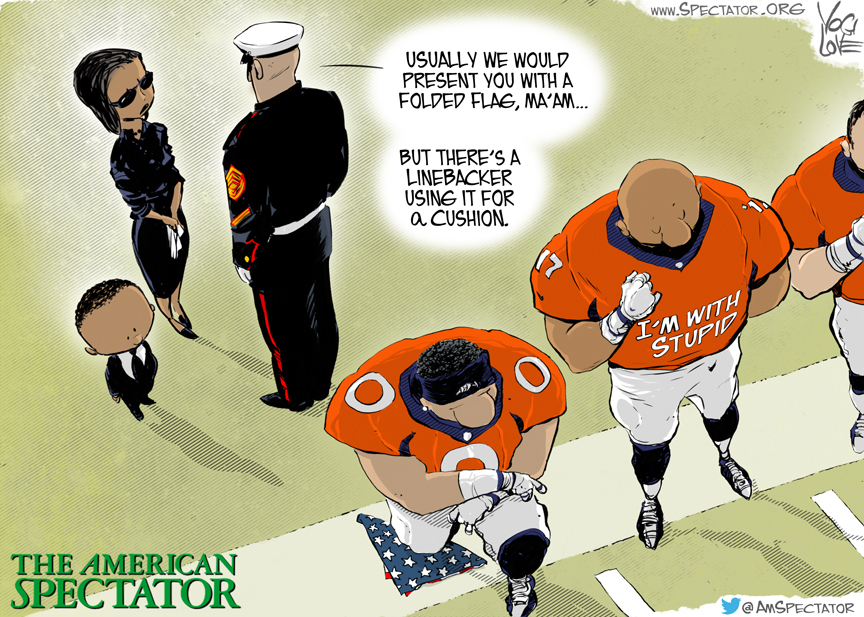 This roundabout road leads to the shortsighted National Football League Players union. The NFL, led by self-satisfied owners and self-indulgent players, has decided, for reasons not readily apparent to average viewers, to protest the American flag and National Anthem. Studious #resistance heads will protest (because of course they will) and say that the football players are protesting Donald Trump and racial inequality. Maybe. But that’s not what NFL viewers see.

Football fans watch their favorite team playing their favorite game with their favorite cheerleaders and favorite player. They know this player’s stats and his autobiography. They know his family, his college team, when he went pro, and his current life experiences. Their favorite player is the American Dream. Many of these guys came from rough backgrounds and overcame. They’re making millions and living large and loving life playing a game for a job. They’ve made it. And the fan gets to be a part of Steeler Nation or America’s Team (the Dallas Cowboys.)

No argument there. Life is certainly not fair. Playing a sport, making millions, enjoying physical perfection, and having plenty of lady friends does not seem fair to most people. It’s hitting life’s lottery. It’s lucky. Most people looking from the outside in, see a damn good life.

Meanwhile, back in reality…

The NFL fan owns a small business or works for one. He often works with his hands — and not to catch footballs. Who is he? Based on advertisers looking for the perfect target, the Fox station says that this guy is someone who might like Dickies. For those in the Acela corridor or who live in the Capital District, these are Dickies, “Williamson-Dickie Manufacturing Company, more commonly referred to as Dickies (after its product brand), is originally an American company headquartered in Fort Worth, Texas that manufactures and sells work-related clothing and other accessories, including back packs, steel-toe boots, and belts.”

Guys who use drills and blow torches wear Dickies. They drive pick-up trucks. They relax with a beer. They watch football. Or they used to. That’s changing, though. They’re choosing other ways to relax.

Families who used to gather around the TV with their black and yellow shirts hoping for a win, maybe the only win for the week, instead get smashed in the face with rich crybabies lamenting the State of Things.

Who needs that hassle?

The football players are taking a knee right when the NFL is seeing declining interest and viewership. The Players union is not really considering their future position.

Business owners care about the most important thing, first: making enough money to pay overhead (employee salaries are often the biggest business cost), and then, making enough money to make a profit by selling a great product. American car companies in the eighties were not making money, or much of it, and looking for ways to cut costs. The unions didn’t feel that their members should shoulder any of the belt tightening. In fact, they increased demands exactly when the companies were in their toughest spot.

A surprising thing happened: car companies closed plants in Flint, Michigan, and then Detroit, and then Lansing. Whole divisions were downsized or even eliminated.  Remember Oldsmobile?

The unions were shortsighted. Unions tend to be. They never imagined that because of their recalcitrance that Michigan or Ohio jobs would become Mexican or Canadian jobs. Later, they’d become North Carolina or Texan jobs.

American car companies never recovered their shiny preeminence after the development of outsourcing manufacturing to control payroll costs. The jobs didn’t come back to Michigan. The unions “won” the battle but ultimately lost the war. Even today, they struggle to maintain relevance. They enriched themselves. They pushed for excessive benefits for workers. They overvalued their workers’ contributions and the product they created.

NFL players and even most owners think they have a no-lose proposition. Who doesn’t love football? Well, lots of folks love football, just like they loved cars. Do they love the political crap that’s become a part of what used to be an escape? Do they need the shoddy product when there are other, less frustrating choices out there?

People who thought they’d never buy foreign are driving their Japanese crossover vehicles to a 5K or to watch a Rugby match. People who couldn’t imagine their world without cheering for the Steelers are imagining it this very instant. They’re looking for alternatives.

The NFL doesn’t know it, but it’s reached its zenith. Oh, it still has fans, just like Americans still buy American-made cars. But it won’t be the same. It already isn’t the same. The magic is gone.

Taking a knee is taking it too far. A disgusted fanbase will turn its attention elsewhere.

Colin Kaepernick, like so many line workers in Michigan and Pennsylvania, thought that the jobs would come back. That things would turn around. Get better. Ten years from now, the NFL union won’t connect its behavior with the consequences that are coming: less money, fewer benefits, tighter margins, closing markets, but it’s connected and they’ll only have themselves to thank.

Hope the preening is worth it. The NFL golden goose is dead.