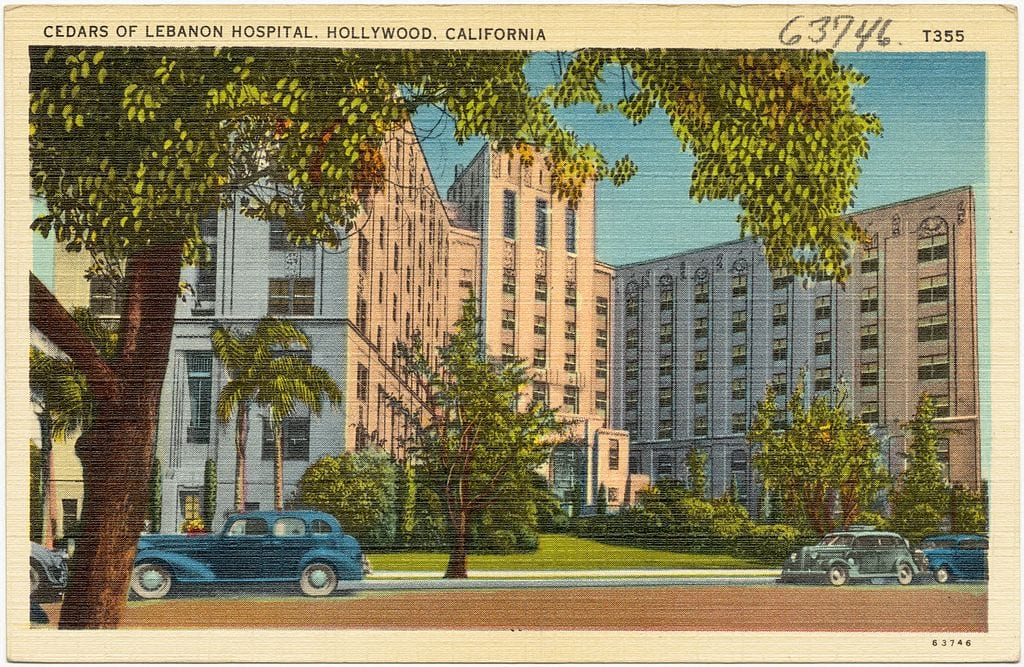 Wait a minute! What am I doing here? I am in the waiting room for the “Cath Lab” — short for catheterization laboratory — at Cedars-Sinai Hospital. The room is jam packed with other poor souls who are about to get wires stuck in their veins to save their lives. I have been having pain in my feet for some time and I had an incredibly lengthy MRI about it.

Apparently the MRI showed that there were some places in my legs where the arteries — which have a lot of pressure — were pressing against my veins — which have much less pressure. This meant that blood was not circulating properly — or so they said and this might have been the cause of my pain.

I don’t like any part of this. The pain. The needles. The wires. EVERYTHING TERRIFIES ME! So, I sat in my tiny seat and prayed. Sure enough, the receptionist called my name and I went in to tell her how old I am, how fat I am, who is to be notified in the event of my demise, who is to get any leftover blood or urine samples. I answered to the best of my ability.

It was actually a great pleasure to have a conversation that had nothing to do with Mr. Trump or Mr. Putin or “… the intelligence community…” or Helsinki. I actually looked forward to carrying on the interview but then I was whisked up to the actual lab itself, down at the end of an incredibly long, dreary hallway, a hallway for the condemned to walk on their way to execution of sentence. There is some great art at Cedars-Sinai, but I promise you that none of it is wasted in the cath lab.

Then I was taken to a room where my wonderful doctor, Paul Grodan, waited for me with his miracle spray that keeps me from losing my mind when a needle is inserted into my veins. He looked reassuring and jovial. He sprayed me with something that “froze” my arm and then they inserted the needle with its deadly tip. The anesthesiologist was a somber looking fellow who seemed to delight in my terror. He told me he had grown up in Brentwood. Very fancy part of LA. Soon enough, I was having myself wheeled down another long, cheerless corridor to the operating room. I wriggled onto the operating table and thought of something my genius friend, Arthur Best, said decades ago. “In an operation, they cut open the body and then they trick it into not dying.” The morbid Brentwood-born anesthesiologist, upon my asking when I would be put to sleep, said, “It’s happening now.”

“I don’t feel at all sleepy,” I said as they slid an oxygen mask onto me.

The next thing I knew, I was waking up two and a half or three hours later. I was groggy. My legs hurt. My dear, wonderful, miraculously insightful pal, Judah, was waiting at the bottom of my bed. Moments later, there was loyal, brilliant, courtly Phil DeMuth. I don’t remember much about what was said. I was in a trance. A real trance.

It was uncomfortably hot in my tiny cubicle, surrounded by curtains. In the space next to me was a man shouting like mania in Russian into the phone. (An attempted collusion that didn’t work out? I asked the nurse to make him pipe down. Soon a cardiologist came to see him and tell him — in perfect English — that he was at that exact moment having a “mild” heart attack. Perfect cover for a spy. The doctor told him he was about to die if he did not get major by-pass surgery. That’s even better cover. They ran him down the hall to the operating room. I mean RAN. A ruse to allow him to give orders to Trump? Possibly.)

For some reason, I was starving. I asked Judah to go get me a rare cheeseburger, which he did. I put a lot of salt on it and it was heavenly as the Filipina nurse fed it to me one bite at a time. I’m surrounded by Filipinas. My wife has three nurses, all Filipinas. All astonishingly quick and capable and polite. I’d love to go to the Philippines.

The big problem was that because of the supposedly immense incisions in my legs, I could not go to the bathroom. That was really uncomfortable.

Doctor Grodan came by to tell me that it turned out the MRI that had sent me to the hospital was misleading. I did not have any kind of blockage in my legs’ veins. They had not put in a stent and I was in the same venous shape I was in yesterday.

All of that fear and the needles and the shouting Russian spy and what comes of it. Nada.

I had to rest without bathroom privileges for three more hours and then I was allowed to leave. Judah M. Friedman, genius and super friend, brought me home. I was wildly happy to see my wife and our Filipina (of course!) nurse and my German dog. I wolfed down part of a corned beef sandwich, and then climbed into bed and conked out for about five hours. My legs really hurt where they cut into me. But not too much for me to sleep.

My wife lay next to me until about one in the morning. It was a thrill kissing her good night. Her nose was freezing cold from my keeping my room at 64 degrees. That touched me because I know she doesn’t like the cold. She had allowed the room to be uncomfortable for her for my comfort. She’s a saint. A true goddess.

Dazzling, frightening thunder rocking the house and then sheets of rain and then fantastic heat and humidity.

A visit to Dr. Grodan who told me I must lose weight. No apology for the operation that never needed to be. Of course, it was not his fault. It was the fault of the vein doctor. But he didn’t apologize at all.

As my pal Phil so aptly says, it all comes down to “Billable Hours.” But I had dozens and dozens of texts from friends who were concerned about me, and of course from my glorious sister. They don’t get paid.

As I lay in the hospital, I mostly thought of our fighting men in agony, wounded, in crude field hospitals if any hospitals at all. In the mud. Horrible smells. Inadequate anesthesia. No cute nurses. Just pain and dirt and blood. We can never thank them enough. They suffered so I could whine. And my wife. So loyal when I am such a madman.

This evening wifey and I watched the second half of Gone With the Wind. Best movie ever made. Vivian Leigh. Best actress of all time and how she suffered in her sad life. Yet how much she brightened millions of our lives. Olivia de Havilland, Scarlett’s rival and friend and sometime sister-in-law, the saintly Melanie Wilkes, always thinking of everyone else before herself. She reminds me of my goddess wife, world’s most forgiving human, Alexandra Denman, and also of the real superstar of American public life in the seventies, Julie Nixon Eisenhower, a goddess from the same mold as my wife.

And now, good night to all the superstars in uniform out there.