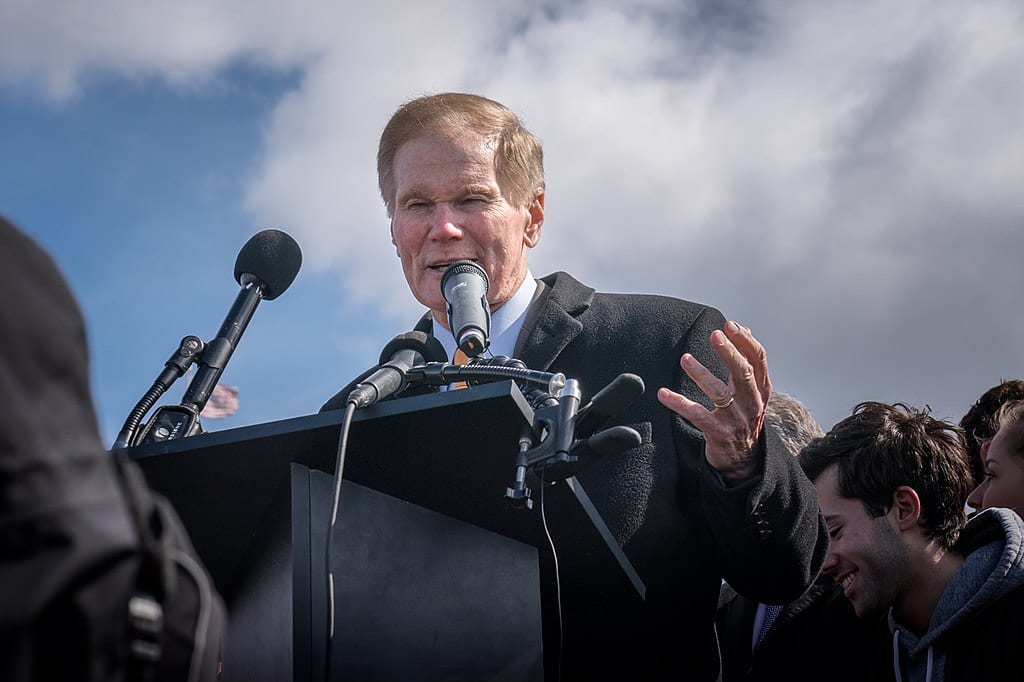 It’s a wonder any civilized person donates to political campaigns, considering what the bulk of the money is spent on. The biggest cost items in most campaigns are TV ads, most of which run in this wise: “My opponent is a liar, a thief, and a pedophile. He steals everything not pinned down and snatches food from the mouths of widows and orphans. He eats infants for breakfast and drinks the blood of flies. He buries the people he murders in his back yard. But the worst thing about him is…”

Candidate “debates,” which are more parallel rants than debates, are little better. In one of these forensic free-for-alls this week, Florida’s Democrat incumbent U.S. Senator Bill Nelson and Republican challenger Rick Scott, the retiring governor of Florida, went after each other with a series of accusations. Scott called Nelson’s mental capacity into doubt, saying that he is confused. Nelson helpfully pointed out that Scott is a liar and “a walking conflict of interest.” Clearly not all the hot air in Florida is coming from the sun.

This unedifying back-and-to will be translated into Spanish by Telemundo. It will be broadcast for the benefit of Floridians who speak Spanish, in which language it will be no more edifying than it is in English.

It’s a pity this campaign, like most political campaigns, is pitched at such a low level, as the outcome of it will be important both for the state, and possibly for the nation as Republicans attempt to retain their slim majority in the U.S. Senate. Scott has a chance to unseat Democrat Nelson, who has held this Senate seat since 2001. Heading into the final month of the campaign, polls show the race a tie or Nelson ahead by one or two points.

This is a bit of a puzzlement, as Nelson, though he has been in one public office or other since John Paul Jones was a lieutenant junior grade, is hardly well known. He has name recognition numbers that would be concerning to a political newbie, let alone a 76-year-old who has been in office since before Studebaker went broke. There are Floridians who can name Martin Van Buren’s vice president who don’t know who Bill Nelson is. There are members of Nelson’s own household who don’t know what he does during the day. When he appeared on What’s My Line, panelists thought he was an insurance adjustor. Part of his problem is a bland personality — he can be described as tapioca without the thrills — and there being no particular issue or legislation attached to his name. He’s more a Trivial Pursuit answer than a legislator.

The demographics of Florida keep shifting, and it would take a separate column to parse all the new combinations and permutations. But at base, left-right sentiments are pretty evenly divided among the more than 21 million souls who now call Florida home. And Scott and Nelson clearly represent the two sides of the ideological equation. Those who can fight through the campaign accusations and non-sequiturs and take a look at Nelson’s voting record will see that they have a clear philosophical choice.

Scott has run a solidly conservative administration for the past eight years as Florida’s governor, trying to keep state spending and regulation under some reasonable control. He has ix-nayed crackpot left projects like high-speed rail (and the high-speed government spending that would go with it). His down-side politically is that he’s not cuddly on the stump. He has a strange affect and delivery. He’s not very articulate, especially when he’s forced to go off script (and he has to be forced to). But his record is more articulate than he is.

Nelson, on the other hand, has consistently supported the left’s agenda during his three terms in the Senate. All the ideological vote-measuring groups give him a very high liberal score. Barack Obama had no reason to complain of him (in fact, Obama will likely come to Florida to campaign for Nelson, as will Mz. Hillary). Nelson has supported higher taxes and expanded government. He voted for and then defended Obamacare. He voted against confirming Neil Gorsuch to the Supreme Court. He has branded every Republican attempt to prevent voter fraud as a racist voter suppression. (In Bill Nelson’s world, white racism is still a going concern, very worrisome, and a Republican project.) He has always been a great respecter of the Democrat sacrament of abortion.

Regardless of his obvious leftist bona fides, the mainstream media in Florida insist on referring to Nelson as a moderate. It’s not clear what one would have to do to earn the title of liberal or leftist from this crowd. Nelson’s only possible credentials as a moderate are that he has a good-ole-boy drawl and doesn’t wear a Mao jacket while on the Senate floor.

In addition to the advantage of a supportive press, Nelson will also be helped by the other nasty but important race in Florida, that one between recently resigned (voluntarily in order to spend full time campaigning) Jacksonville Congressman Ron DeSantis and Tallahassee mayor Andrew Gillum to replace Scott as Florida’s governor. Nelson would not be able to draw large numbers of black voters to the polls, an absolute requirement for Democrat candidates to succeed. But Gillum, who is black, will get this demographic out in force, to vote both for Gillum and for Nelson.

DeSantis, a former Navy JAG officer, has compiled a solid conservative record in his almost six years in Congress and has been endorsed by Donald Trump. If Gillum took a half step to his left he would fall off the face of the Earth, and he has called for Trump’s impeachment. He has also called for more taxes, the end of ICE, a $15 minimum wage, more gun control, even more incontinent spending on education, spending to control global warming, and free ice cream for all. (OK, I made that last one up. But I’m convinced Gillum hasn’t campaigned for this because he hasn’t thought of it yet. He has a bigger bag of goodies than Santa Claus. He probably won’t whoop up free beer. In the recent Kavanaugh knee-capping, Democrats have come out against beer.) Another mainstay of Gillum’s campaign is to call Republicans in general and DeSantis specifically racists.

For all of Gillum’s left crack-pottery, most polls show him leading DeSantis by between one and five points. Hard to know what this is a signal of. Have Floridians truly moved to the Bernie Sanders side of the ledger? (America’s crazy uncle campaigned for Gillum before the Democratic primary, challenging Floridians to elect “a true progressive.”) Or is white guilt a bigger factor in Florida than white racism?

There you have it. Two clear-cut left-right races for important offices in the nation’s third largest state, with the right’s candidates trailing but in the hunt. Within easy memory, Florida was a reliably red state. Then things started to get purplish, with Florida going for the little hustler from Chicago by narrow margins in 2008 and 2012. Results of these two races next month will give some indication of whether Florida is headed for true blue (which would make conservatives very blue indeed). If it does, and its 29 electoral votes become reliable for Democrats, it will take some really fancy arithmetic for any Republican presidential candidate to come up with 270 electoral votes and a ticket to 1600.