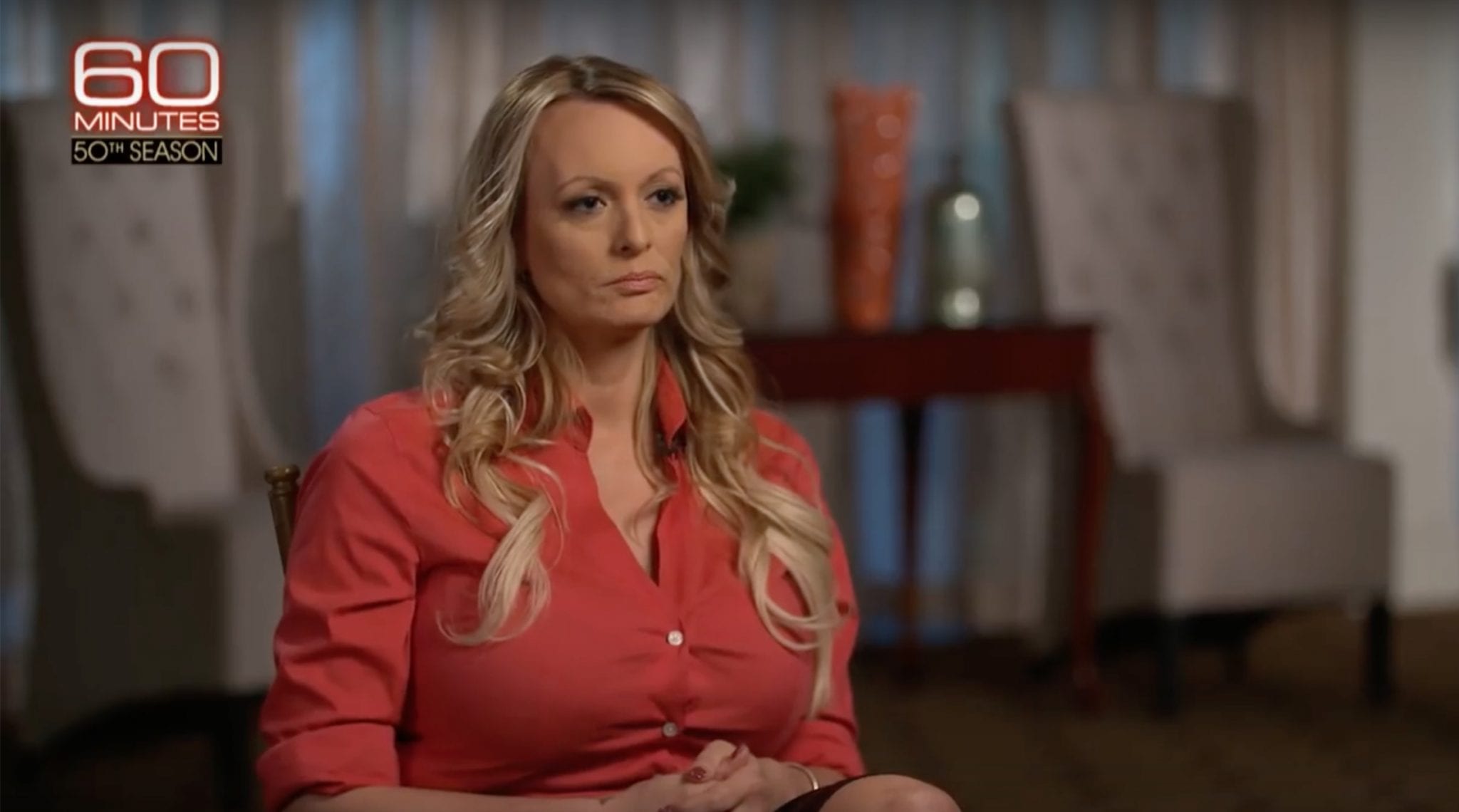 After all, Daniels is considerably easier on the eyes than Robert Mueller, whose fading efforts at bagging the President on some weakly-constructed legal theory of Russian collusion rest almost solely on Trump assuming the role of Col. Nathan R. Jessep in A Few Good Men to blurt out “You’re damn right I did!” amid accusations of rigging the 2016 election with his pal Vlad Putin.

Which, as of Thursday, might actually happen if the reports about the resignation of John Dowd as the president’s lawyer are true. We’ll leave that aside for now.

As more and more people grow weary of Mueller’s Russian snipe hunt around the country, though, along comes Daniels — whose story seems to change by the day as she and her lawyer Michael Avenatti, who has ties to Rahm Emanuel and Joe Biden, but please don’t let that influence your thinking at all about all of this, milk media attention for all it’s worth — to eat up more airtime than she’s received in starring in such titles as Screw You, Nymphos and Snatched.

The basic gist of the accusations Daniels has made are that in 2006, when Trump was still relatively newly married to the current First Lady Melania Trump and while Melania was pregnant with the couple’s son Barron, she had a brief sexual encounter with The Donald in Lake Tahoe.

And now she’s going on 60 Minutes. With Anderson Cooper. NDA be damned.

Begging your pardon, Mr. Cooper, but I do not care.

There was a time when I used to care. I’m a conservative, after all, which means I embrace the wisdom of our Founding Fathers. When Ben Franklin answered, “A Republic, Madam — if you can keep it” to the question what the Founders had wrought, I get what he was saying. Particularly when that statement is paired with John Adams’ famous quote about how “Our Constitution was made only for a moral and religious People. It is wholly inadequate to the government of any other.” Public virtue matters in a representative republic which enshrines the kind of freedoms ours does within its core values, and electing leaders who can embody that public virtue is a necessity.

Or at least it used to be.

My side believes in standards. My philosophy is informed by Christianity, which has at its root the understanding that while we’re all sinners capable of wickedness, it is the Lord’s grace coupled with the aspiration and effort to become more than we are which gives life meaning and beauty. The inability to always meet such standards of public virtue does not invalidate them; every conservative knows this. All sin; all disappoint.

All can be forgiven, though repentance must precede such forgiveness. None of this is too difficult for people of reasonable intelligence to comprehend.

So there was a time when Trump’s behavior would be a disqualifier. That Trump is a sexual hedonist and philanderer isn’t a proposition in controversy. It’s a fact. It’s known. It was priced into his stock, and not long ago it would have disqualified him.

But that’s in the past. I don’t care.

I don’t care because I was told that when Bill Clinton engaged in a string of behavior not just indicative of marital infidelity but of sexual harassment and abuse, and even of out-and-out rape, I was not allowed to be horrified and contemptuous. When Clinton perjured himself amid those allegations gaining teeth, after he had solicited oral sex with a young intern on the taxpayer’s dime in the Oval Office, and when he essentially accepted disbarment and paid $850,000 in a settlement to a woman (Paula Jones) he’d attempted to destroy for going public with a lurid tale of molestation, I was instructed these things were “just about sex,” and trivial, and that my disgust with his moral turpitude in office was petty and partisan.

That Clinton was, in the words of his wife, “flat broke” upon leaving office because of the Paula Jones settlement and the legal fees the case generated, and this was the justification for creating the Clinton Foundation as an industrial-scale graft and corruption machine which ultimately carried immense national security implications, was certainly not something I was entitled to judge him for. Because it was all “just sex,” and I was petty and partisan for being concerned about it.

Particularly since Clinton, as a Democrat, was never a “hypocrite” — which is the universal defense for disgusting behavior on the part of him and his party. Having no standards and thus being incapable of falling short of them, I was told, is preferable to having high standards one’s personal conduct cannot meet.

And therefore when fairly credible accusations arising from Barack Obama’s murky background indicating his potential bisexuality, or homosexuality, as a manifestation of his own marital infidelity, surfaced during the 2008 campaign and after, I was instructed not to give credence to those. They were clearly not true, no matter how much smoke surrounded them, and even if they were it was none of my business and those allegations were petty and partisan — and Obama was no hypocrite in any event, I was told.

Likewise, when Jim McGreevey was able to ride off into the sunset after being discovered with a gay lover on the New Jersey state payroll by use of the famous “I am a gay American” defense, and when it took Andrew Breitbart playing P.T. Barnum to finally attract media attention to the perversity of Anthony Weiner, who was on the express train to Gracie Mansion at the time, I was not allowed to form opinions of the decline in American public virtue.

And amid the GOP primary in 2016 when Trump was the most vulnerable of the 17 Republican candidates to scrutiny over personal misconduct, the same legacy media which instructed me as to the limits of my Clinton and Obama inquiries did all it could to promote Trump as the GOP nominee, no doubt for the very reason that his sexual immorality would surely make him unelectable in the general election.

Strangely enough, I and the majority of the American voting population as expressed by the Electoral College were well enough aware of Trump’s moral failings at the time of that election. Weighed against Hillary Clinton, and slow-rolling disclosures of her husband’s frequent rides on Jeffrey Epstein’s jet to “Pedophile Island,” we chose Trump anyway. Not because we thought he was reformed, repentant, or moral — because he was the lesser of evils.

So no, Mr. Cooper. I don’t give a damn about Stormy Daniels.

And I don’t give a damn about your accusations of hypocrisy. I know those accusations are made in bad faith, just like your other epithets and implications are.

I didn’t make the new rules. I never said I liked them. I never chose them. But I do insist you live by them.

But I will congratulate 60 Minutes. I always knew it was little better than the National Enquirer, and now the show has validated that perception. I’ll act accordingly.