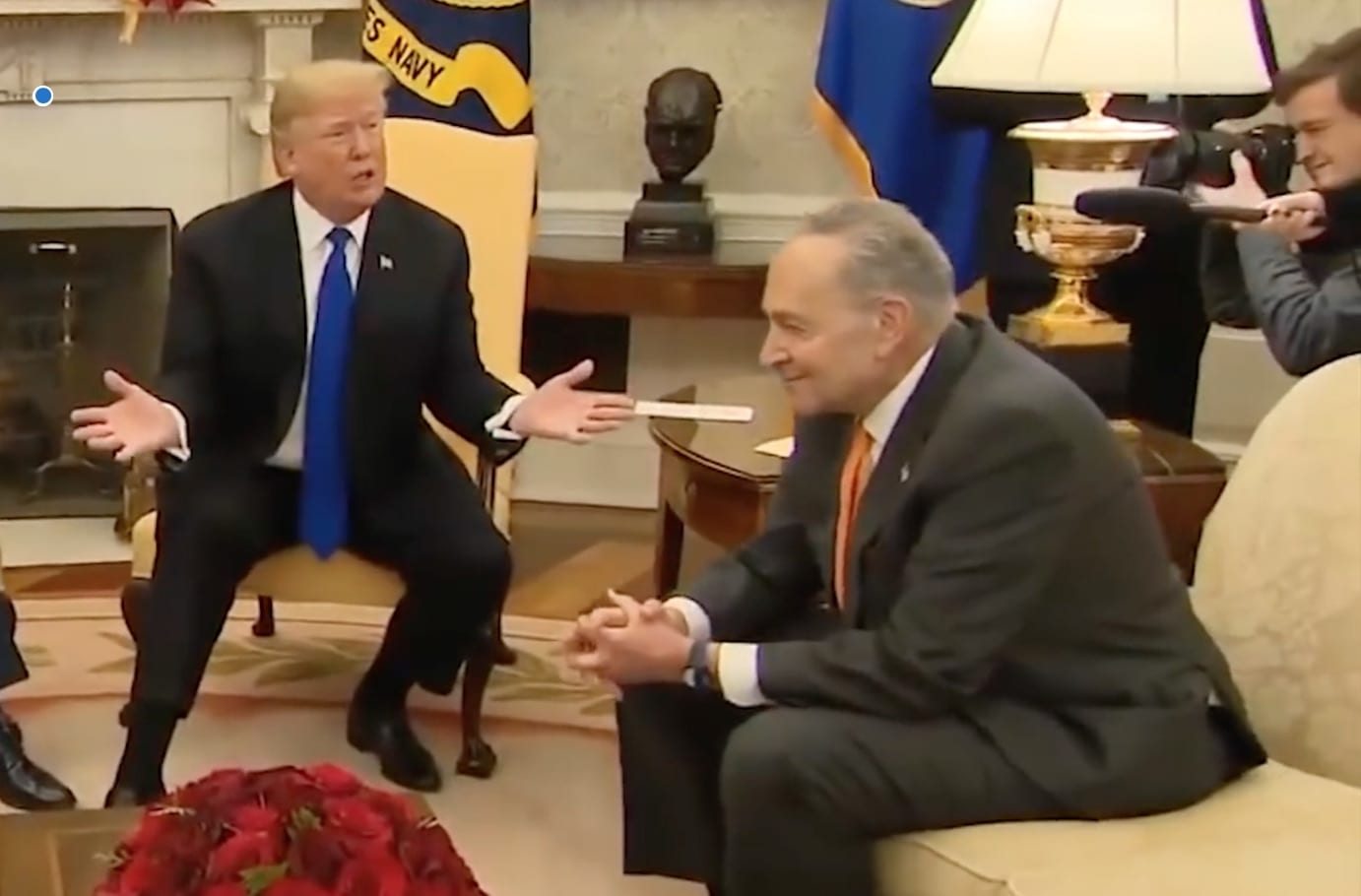 New York’s senior senator made the rounds on the Sunday shows boasting of his caucus’s ironclad commitment to blocking funding for President Trump’s border wall:

Democrats dug in their heels Sunday on President Trump’s threat to shut down the government unless he gets money for his border wall, saying if the president makes good on his demand, the American people will suffer.

But the White House contends American citizens are already suffering — with or without a shutdown — because of the rise in illegal immigration.

The two sides showed no sign of willingness to compromise Sunday, with just four days left to broker an agreement before the federal government partially shuts down.

“We should not let a temper tantrum — threats — push us in the direction of doing something even our Republican colleagues know is wrong,” Senate Minority Leader Charles E. Schumer told NBC.

The New York Democrat said Republicans in Congress “have to have the guts” to tell the president he’s wrong for refusing to fund the government unless he gets $5 billion for his border wall.

“President Trump should understand there are not the votes for the wall in the House or the Senate. He is not going to get the wall in any form,” he said.

This is idiocy, and Chuck is a schmuck for pushing it.

First of all, there are more than enough votes in the House for the border wall, though there won’t be after the new Congress takes office in January. Unless, of course, the lame-duck Republicans who have their feelings hurt over losing re-election don’t feel like being at the Capitol over the holidays — though counting on your opponents’ lack of morale is never a particularly sound strategy.

But Schumer is right that he can block cloture in the Senate, if he chooses to. So as of right now it looks like we’re going to have a government shutdown over the Democrats’ refusal to fund Trump’s border wall.

And almost no Republicans in America will give a tinker’s damn. Trump surely won’t.

A Trump shutdown doesn’t look like a Barack Obama shutdown, by the way. First of all, most of the government has actually already been funded via appropriations bills which have passed — so you’re only looking at a partial shutdown.

And Trump isn’t likely to play up the negative effects of a shutdown the way Obama did — planting barricades around the World War II Memorial in DC, for example, or holding tourists hostage in Yosemite National Park. It’s going to be very mild.

So the only people who will really be bent out of shape about a shutdown will be some government workers and Democrats who need a government service here and there.

Meh. Nobody cares. Trump won’t. Especially since he’s already given his best offer — a carbon copy of last year’s continuing resolution which avoided a shutdown, plus the wall funding.

And why not take that deal? So what if Trump gets his wall?

The Democrats’ intransigence over the wall is one of the more inexplicable examples of political sclerosis this writer has ever seen. The wall itself has never been particularly important as a matter of policy — it’s a symbol of Trump’s commitment to border security much more than it is anything else.

And border security is one of those 70-30 issues politicians dream about being on the right side of. Guess what, Chuck? You’re not on the 70 percent side.

Shutting down the government in pursuit of undefended borders and runaway illegal immigration isn’t much of a good look for a party which essentially won a House majority on vote-harvesting and has a tenuous, at best, opportunity to keep that majority past the 2020 elections.

But this is what Schumer and Nancy Pelosi seem to think is a winning strategy to open the next Congress with.

What’s so stupid about this is the politics for the Democrats probably work better with the wall than without it. Let Trump have his wall and you can spend the next two years talking about how it didn’t stop border crossings, how the illegals mostly come via visa overstays, how it’s a Berlin Wall for the 21stcentury (a stupid message, but nonetheless the kind of thing Democrat voters get torqued up about). And then, if you can parlay that messaging into a President Biden or Kamala Harris after the 2020 elections you can make a big show of tearing the thing down.

Instead, Schumer is making this a wall to die on. Well, OK. Have your shutdown. Don’t be shocked when you’re the one losing this political fight you made for yourself, though.

I’ve written here and there about the Louisiana governor’s race which is likely to be the big political test case of next year in advance of the 2020 cycle, and on that score there’s news. Namely, that last week Ralph Abraham, the North Louisiana congressman who appears to be the Republicans’ leading candidate now that Sen. John Kennedy has announced he’s not running, released a poll which didn’t contain particularly good numbers for incumbent Democrat John Bel Edwards.

Abraham’s poll, conducted by respected Republican pollster Remington Research, gave Edwards a 46 percent approval rating with 40 percent disapproval — not the kind of results the governor would like. And in a three-way jungle primary race between Edwards, Abraham, and Republican businessman Eddie Rispone, the incumbent is in the lead — but only by a 43-31 count over Abraham, with Rispone pulling nine percent and 17 percent undecided.

But what’s worse for Edwards is the head to head matchups. Against Abraham, he’s in a dead heat at 44 apiece. And against the lesser-known Rispone, he only leads 46-39.

Worst of all, the poll showed that Edwards is only getting hard support from 53 percent of Democrat voters. Some 25 percent say they’d rather vote for a different Democrat, and 15 percent said they won’t be voting Democrat next year. Only seven percent are undecided.

That’s not exactly an environment conducive to growth in Edwards’ support. That poll shows the Republicans don’t need a Kennedy to beat Edwards.

Here’s a question: if you can’t tell the difference between a boy and a girl, how on earth are we supposed to let you run things?

Finally, the Weekly Standard controversy. Our readers by now surely know that TWS has closed its doors, and with that news its co-founder John Podhoretz, writing at Commentary, savaged owner Philip Anschutz for what he called the “murder” of the magazine.

Podhoretz’s piece was, he even admitted, pompous in trashing Anschutz for essentially merging TWS’s readership with the Washington Examiner, which Anschutz also owns. But it’s worse than that, because Podhoretz’s screed took no note of the fact that TWS was Anschutz’s property. Conservatives are supposed to be big believers in private property, and yet here’s someone who styles himself a conservative calling it an “intellectual and political crime” that an owner of a publication who no longer wishes to continue operating it at a loss might choose to close it down.

And what’s worse, Podhoretz’s attack wasn’t even accurate when he claimed Anschutz refused to sell the Weekly Standard before he closed it.

That isn’t the word on the street. After all, didn’t Anschutz give Steven Hayes months to find a buyer? He wasn’t successful, and that’s not surprising given TWS was a publication which was dead — and it was dead because the editors killed it by alienating most of its audience.

Nobody wanted to buy it, because it was dead. The only thing that was left of it that had any value was the subscriber list. That, Anschutz harvested — as was his right, since he owned it and Podhoretz did not.

But the product itself? Who wanted to read “Republican” screeds about how terrible Trump is in a supposed conservative magazine? There’s a surfeit of that every hour on CNN and MSNBC as the pet Republican pundits sing for their supper.

Trust me on this, because I’ve got a publication of my own, and trust Bob Tyrell and the gang here at The American Spectator— it’s hard enough to keep a publication alive when you don’t actively alienate your readers. When you do, your demise is a matter of time.

The money saved not producing the Weekly Standard at a loss can be plowed into growing the Washington Examiner. Contra Podhoretz, the conservative movement was not harmed by Anschutz’s actions.