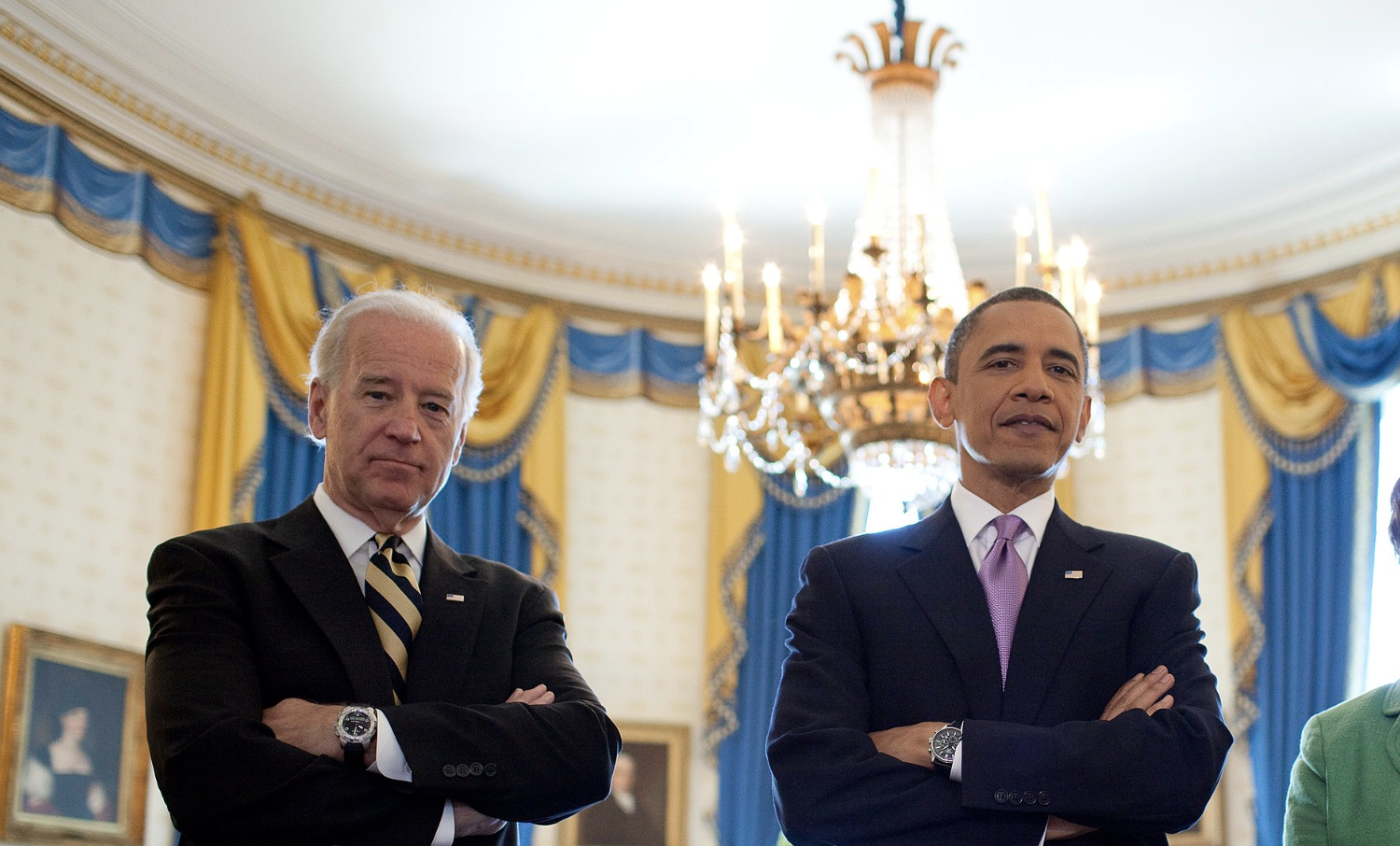 In the Wholly Epistemic and Cathartic Church, known popularly as Wokism, there are few accorded greater reverence than St. Barack the Inscrutable. His legendary inscrutablity enabled him to tangle the untangled and to bring regimentation, stagnation, and indignation of dogma where the heresy of free and open discourse had run wild.

Among his many labors was setting up the Ladder of Intersectional Virtue as it is applied to politics. It stemmed from a mighty vision he had of peoples from every nationality and ethnic background streaming from everywhere in the globe to come to America. He thought, “This must be because America is guilty of systemic racism and is uniquely hostile to all those who are different.” Thus, he acquired his appellation.

Among his greatest labors was setting right a great historical injustice. For thousands of years, the Jewish people had had to find a life in exile and were often subject to systemic persecution of the worst sort, and ultimately to the Nazi extermination effort that wiped out two-thirds of European Jewry.

Colonialist, racist America had thought that it was high time to protect Jews from extermination as they came together in their ancient homeland after the war and sought to reestablish their independence, in whatever way that might be recognized. Many thought that virtuous and right, and there was widespread agreement on this among both political parties.

St. Joe seems to give no credence to the Western lie of freedom of religion, which the woke know to be false because it comes from the West.

But St. Barack the Inscrutable knew better, and he slowly awakened the would-be woke to the cardinal truth they had overlooked: the Jews couldn’t have a rung on the Ladder of Victimhood because they had stopped acting like victims and were busy building a strong, prosperous open democracy instead of nursing resentment and thirsting for revenge. And for those in the know, this knowledge merely confirmed that tradition St. Barack had received from his master, St. Jeremiah the Good Friend of Mine, which he himself received in turn from his master, St. Louis Calypso.

Knowing a benighted and racist America could not accept the truth, St. Barack “lied” to them as he gradually and slowly worked to undermine support for Israel. The culmination of his glorious effort, achieved after he had suffered the martyrdom of losing first the Congress and then the presidency to the opposition party, was his allowing through the United Nations a resolution that declared Judaism’s holiest site and holiest city to be the exclusive holy place of another faith.

St. Barack’s work has been taken up by his own Sancho Panza, a veritable man of the people, who, like all common people, has become a millionaire through a life in public service and has avoided criminal investigation through the many powerful friends he has who find him useful. We refer, of course, to St. Joseph the Incompetent, whose appellation is so transparent to all that it needs no explanation.

St. Joe was recently working on his master’s agenda again when just this last week he phoned up that pillar of democracy and self-made man of the people, King Abdullah of Jordan. The excuse for the call was the endless cycle of violence caused by colonialism and apartheid that had to be responded to by attacking Jews at worship. While St. Joe was talking with the monarch, more or less, the king’s prime minister, speaking in Jordan’s parliament, praised those peaceful strivers for reconciliation and harmony who had used the heights of the Temple Mount in Jerusalem to express love and holiness by pelting Jewish worshippers below them with rocks and other projectiles big enough to injure or kill.

Said the Jordanian king’s prime minister: “I salute every Palestinian, and all the employees of the Jordanian Islamic Waqf, who proudly stand like minarets, hurling their stones in a volley of clay at the Zionist sympathizers defiling the Al-Aqsa Mosque under the protection of the Israeli occupation government.” And clearly, Jews at prayer at their holiest site are defiling, since that has been stated as fact by someone higher up on the Intersectional Ladder of Victimhood, as set out by St. Barack himself.

Quite properly, St. Joe the Incompetent did not comment to the king on his prime minister’s perfectly expressed truth. But he did brilliantly make no mention of the Temple Mount being a Jewish holy place, and, in a stroke of genius, agreed with the king that the status quo on the Temple Mount should be kept, with police watching intently so that Jews should not try to quickly move their lips in vile silent prayer in the few hours they are allowed onto the top of the Mount.

Knowing admirers of the strategy of St. Barack wink at this. Of course, most of the American people will believe, infected by colonialism and racism as they are, that the status quo being referred to is the choice made by Israel in 1967 to treat Muslim holy places with respect and leave them under the governance of their religious authority. Israel even went so far as to outlaw Jews praying on the Temple Mount.

Predictably, the Zionist colonialists tried to pray anyway and to try to petition their democratic government to accommodate that desire. But we have learned in America how vile and offensive the prayers of others can be, especially when it is another that is at the bottom of the Intersectional Ladder.

St. Joe seems, properly, to give no credence to the Western lie of freedom of religion, which the woke know to be false because it comes from the West. The Barack cognoscenti are winking and, with knowing smiles, whispering to those they believe are not from Project Veritas that St. Joe must be parsed as referring to the status quo before the apartheid state came into existence.

For under the exquisite and benevolent auspices of the Hashemite monarchs, before Israel became independent and the Jews had no state, Jews were allowed no access whatsoever to the Temple Mount. Similarly, at the grave of the Patriarchs and Matriarchs of Israel, in Hebron, Jews would be allowed at times to climb some stairs and peek in through a barred window — if they dared enter a city which drove all its Jews out in 1927, leaving nearly 70 dead behind and with many others injured or raped.

That status quo would please the woke very much. If that is indeed the plan, then St. Joe the Incompetent is establishing respect for all indigenous peoples everywhere, by ignoring those indigenous peoples who strive to make themselves better and not upon depend on the whims of the self-righteous and powerful and their charming attempts to merge postmodern despotism with retro corruption. (READ MORE from Shmuel Klatzkin: There Is Nothing More Dangerous Than Substituting Politics for Religion)

Predictably, the Israeli prime minister imposed the vicious and racist Western doctrines of nonviolence and freedom on this discussion. Here is part of his shameful torrent of micro-aggressions unleashed against those brave enough to try to stop the violent acts of Jewish prayer and presence: “Israel is doing everything so that everyone can always celebrate their holidays safely — Jews, Muslims and Christians. We expect everyone not to join the lies and certainly not to encourage violence against Jews.”

Outrageously, the Israeli PM dared to try to correct those who “blame Israel for the violence against us, those who encourage throwing rocks and violence against the citizens of the State of Israel.” How unsafe those words must make them feel! Perhaps they might even doubt themselves and think that mutual respect and commitment to peace would lead to peace. How lacking in sophistry do they think St. Joe is? With that kind of attitude, how could we hand the Middle East over to Iran and Russia, helped ever from behind by the benevolent Xi?

So do not feel uncomfortable. Know that St. Joe the Incompetent is living up to his name as he does his master’s work, destroying the Abraham Accords in order to guarantee nuclear weapons and regional hegemony to those highest on the Ladder — our friends in Iran and all those who fight peace along with them.

Maybe Hunter can sit on a board in Tehran?