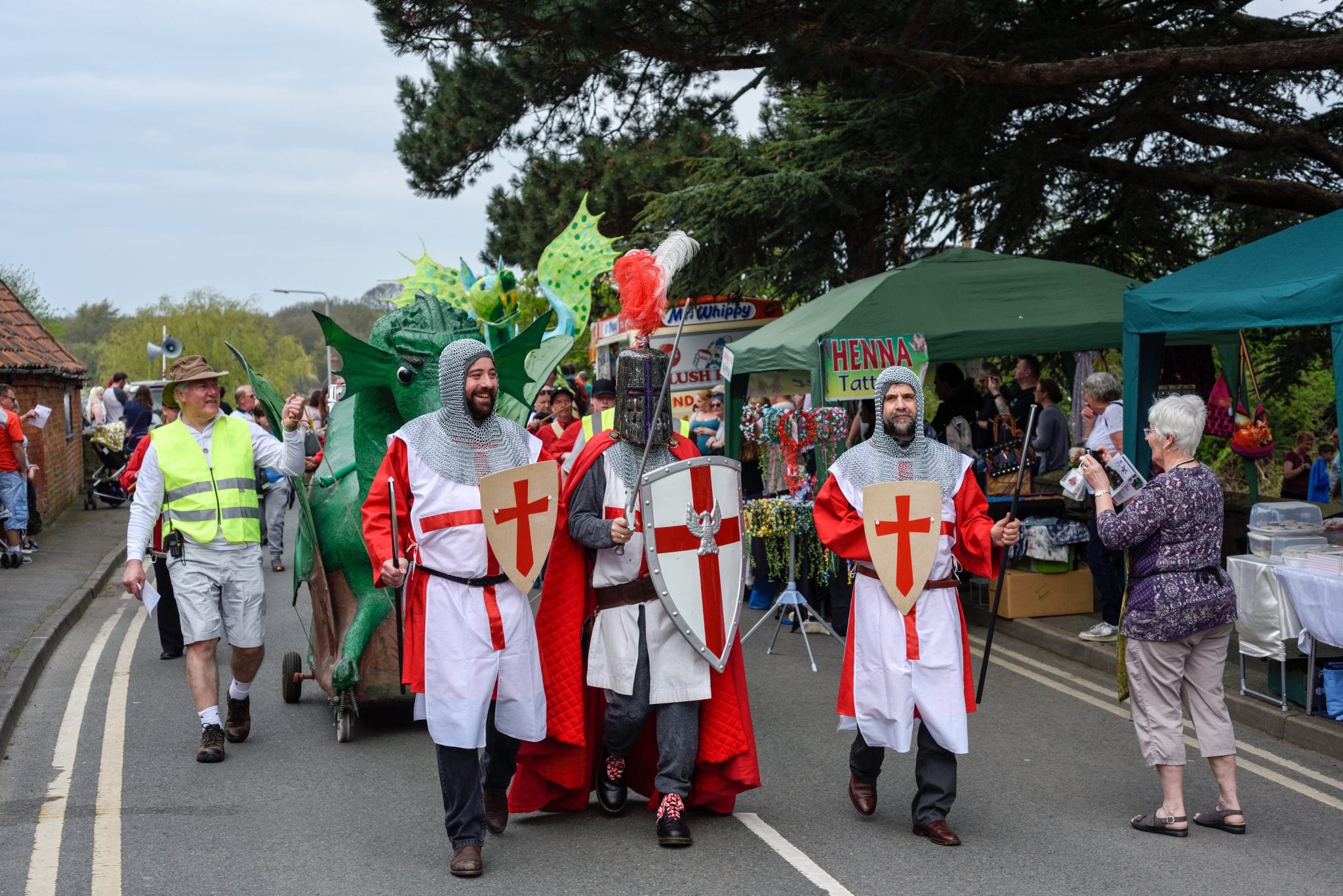 Today English Brexiteers celebrate St. George’s Day in memory of the patron saint of England. The coronavirus shutdown mandates minimal festivities, so this year there will be none of the street parties and local parades that have sprung up since Britons began reasserting pride in their national independence.

Everyone knows the ancient tale of St. George slaying the dragon. What a symbol for these times! After the social and economic turmoil caused by the coronavirus, new champions of liberty are coming to the fore. Never was a patriotic questioning of government diktat more sorely needed. Not to be displaced, even the “dragon” returns to haunt these times, now in the guise of China.

Once more, an Anglo-American alliance is forming. Leaders in both countries vow to ramp up domestic production and end their countries’ reliance upon Chinese trade. In an interview with Breitbart London, Nigel Farage praised President Trump for standing up to China, but emphasized that we all must play our part in shifting priorities. “Ultimately, it isn’t governments or trade deals that decide how much business gets done between nations,” Farage explained. “It is consumers that make that decision, and I am hoping tens of millions of consumers across the west will follow my lead.” He is cautiously upbeat: “And if that’s right, we will diminish the power of China.”

Meanwhile, Steven Mosher in the New York Post examines global trade post-coronavirus. Boris Johnson, Mosher reports, is said to be “furious with China” as he recuperates, angry not only for deceptions in its virus updates but also for its supply-chain shortages. Huawei’s involvement with the UK’s 5G telecommunications network is said to be under review.

Will multinational corporations move production out of China? Apart from public pressure à la Farage, probably not. “But governments are already intervening to make sure their companies do act in the national interest,” Mosher adds.

This is more than simply a retaliatory step against China, as the origins of the virus were in the Wuhan province. Political leaders worldwide view with alarm the product shortages and empty store shelves. What use is free trade when trade routes wither and national borders slam shut?

For good or ill, protectionists are exploiting the crisis to promote domestic industry and propel their arguments for “home-grown” manufacturing. “Autarky” or self-sufficiency is again raised as an alternative, particularly when much of Western consumer goods (and important pharmaceutical and health-care products) come from China, the epicenter of the coronavirus pandemic.

Unsurprisingly, the upsurge in favor of protectionism sets free traders on edge. Unrestricted exchange allows countries to specialize and sell goods at lower costs to the world, while protectionism raises prices that only benefit producers and harm consumers. Since we are all consumers, protectionism necessarily hurts everybody.

Are there any exceptions to the free trade mantra? Adam Smith, whose Wealth of Nations put the lie to the virtues of protectionism, was not an absolutist. “If any particular manufacture was necessary for the defence of the society,” Smith wrote, “it might not always be prudent to depend upon our neighbours for the supply.” He imagined that these items were of such importance that “if such manufacture could not otherways be supported at home, it might not be unreasonable that all the other branches of industry should be taxed in order to support it.”

Even Austrian economist Ludwig von Mises believed that the benefits of comparative advantage could be over-ruled if “the sacrifices they impose could be offset by other, noneconomic advantages,” such as national security concerns, whereby “it could be desirable to more or less isolate a country from the world.”

Hmm. Few free traders will be won over by these exceptions, regardless of the economic provenance. Can we look a little harder for a silver lining? The times do not change the economic axioms that underpin the reality of free market economics. Not that there are not exceptions to every rule. “A statesman, never losing sight of principles,” Edmund Burke cautioned, “is to be guided by circumstances, and judging contrary to the exigencies of the moment he may ruin his country for ever.” And who can forget Rahm Emanuel’s political chestnut? “You never want a serious crisis to go to waste,” he said, for “it’s an opportunity to do things that you think you could not before.”

So back to economic first principles. We buy from others what we either cannot supply or procure as cheaply ourselves. The first reason is rather set in stone: we either buy from others or we do without. Yet the second reason has room to maneuver.

For pricing has three dimensions: a commodity price, a labor price, and a “money” price. In how these prices are set, the state plays a larger role than many suspect.

Unnecessary government regulations contribute to the costs of production. Unionized employees, enjoying advantages not shared by employers, often demand contract concessions that are hostile to market realities. Firms, for their part, may be guilty of crony capitalism and subsidies and favors — “rent-seeking” — that add to product costs.

Even money has a price. Inflating the money supply dilutes its “value.” These are the unseen consequences of “quantitative easing.” Sooner or later, businesses are required to raise their prices to keep pace with inflation.

What if governments got out of the way? Cutting needless regulations will help cut the costs of production, as well as permitting more consensual, less confrontational contract negotiations — supporting “right-to-work” states is one way forward.

Getting out of the “money” business may be the most beneficial government action possible. With natural interest rates (the true “price” of money) allowed to set themselves, people will begin to save and invest. Entrepreneurs will build capital infrastructure, and technological advance will lead to more production and less consumer cost. What’s not to like?

The answer is clear. Government should, Murray Rothbard counseled, “maintain a strict hands off, ‘laissez-faire’ policy.” For a healthy free market, “it is for the government to keep absolute hands off the economy and to confine itself to stopping its own inflation and to cutting its own budget.” Even free traders will approve a return of domestic manufacturing if it is based on sound economics and not protectionist emotionalism.

Can a market-friendly response to the coronavirus bring some hope to Anglo-American economies? Thus far, state-mandated shutdowns and cash handouts (needful and deserved as they may be) are themselves inimical to healthful economies. But if governments are serious about economic recovery and acknowledge their own impediments to growth and prosperity, then some good may come out of this horrendous period.

Then we too can cheer in Shakespearean spirit: “Cry ‘God for Free Peoples, Free Markets, and St. George!’ ”