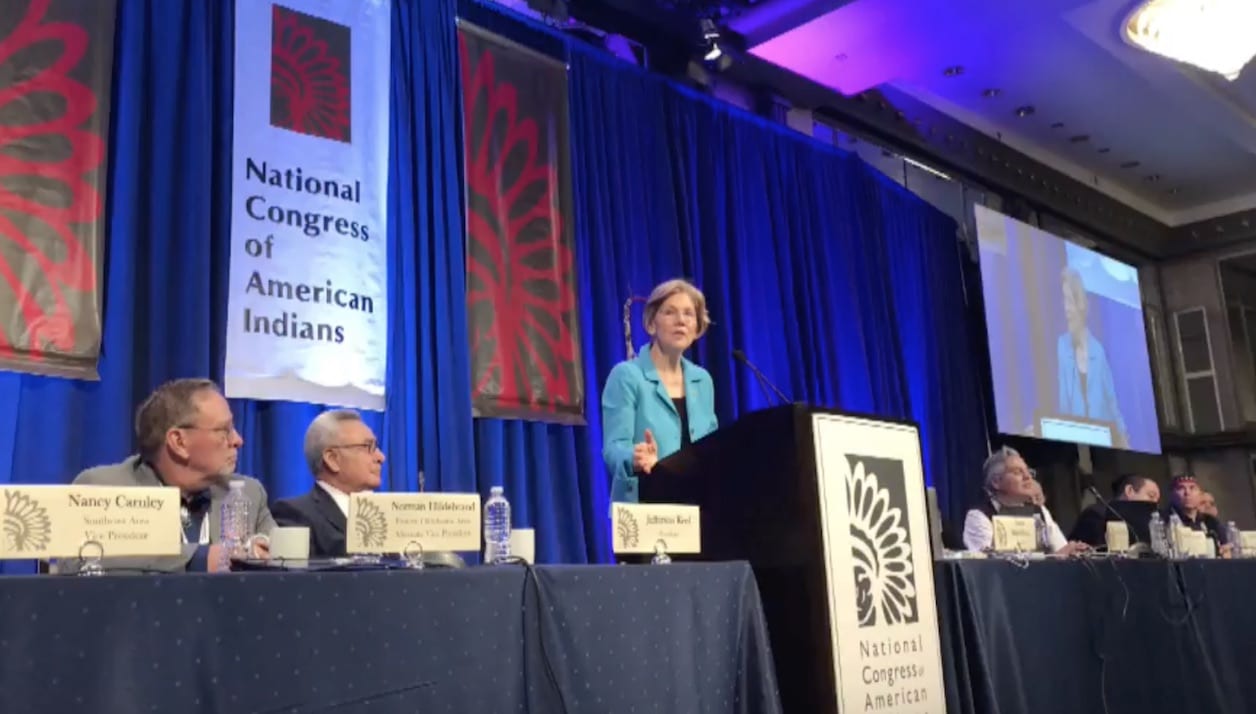 Just what did Elizabeth Warren, the persistently unhinged Democrat senator from Massachusetts, expect to gain from releasing a DNA test proving she isn’t a Native American while insisting the test indicates that she is?

Perhaps it was the glowing-but-hilarious Boston Globe headline which read “Warren reveals test confirming ancestry.” That in and of itself may have been enough — though the Globe story going with that front-page headline Monday advertised Warren’s heritage as 1/512th Native American.

And then the Globe retracted that claim due to what it called a “math error,” and admitted it was going with a different number — 1/1024th.

The average white American’s lineage, according to the Genetic Literacy Project, is 0.18 percent Native American. Warren’s DNA test puts her in a range between 0.098 percent and 3.0 percent, which means statistically she’s likely no more Native American than anybody else in the country.

And it means she’s no less a liar today about the American Indian heritage she claimed as a means of making herself an affirmative-action baby than she was when she originally claimed it.

In a sane world it would not be possible for Elizabeth Warren to release the results of this DNA test. In a sane world there would be non-disclosure agreements, threatened lawsuits, and riveted-shut lips about the issue, and Warren would never raise her claims of Cherokee heritage again — for fear that she’d be hooted out of public life with non-stop derision and catcalls.

This isn’t a sane world, however. In this world, Elizabeth Warren is claiming she’s a real-life Pocahontas and her pals in the partisan Democrat media are dutifully lapping up the lie.

My favorite was from the mouth-breathers at Talking Points Memo, who declared “After Years Of Trump Mockery, Warren DNA Analysis Shows Native American Heritage.”

Yeah, right. As if 1/1024th Native American blood gets you so much as a free pull on a slot machine at the reservation.

Let’s just say that people who aren’t invested in the ridiculous idea of Liz Warren as a 2020 presidential candidate were a bit less impressed with all the smoke signals today. For example, here was the Secretary of State for the Cherokee Nation, Chuck Hoskin, Jr., with his own take on Warren’s triumphal claim.

“A DNA test is useless to determine tribal citizenship,” he scoffed. “Current DNA tests do not even distinguish whether a person’s ancestors were indigenous to North or South America.”

Sovereign tribal nations set their own legal requirements for citizenship, and while DNA tests can be used to determine lineage, such as paternity to an individual, it is not evidence for tribal affiliation. Using a DNA test to lay claim to any connection to the Cherokee Nation or any tribal nation, even vaguely, is inappropriate and wrong. It makes a mockery out of DNA tests and its legitimate uses while also dishonoring legitimate tribal governments and their citizens, whose ancestors are well documented and whose heritage is proven. Senator Warren is undermining tribal interests with her continued claims of tribal heritage.

And then there was National Review columnist Conrad Black, who roasted both Warren and her Democrat defenders in a highly entertaining tweet…

Let me get this straight. The left is permitting Elizabeth Warren, who has less native heritage than I do, to appropriate native culture so that they can call Trump racist for making fun of her for appropriating native culture to get into Harvard. It’s getting hard to keep up.

And then there was the Daily Wire’s Matt Walsh, who offered up a hopeful, if a little unrealistic, bit of analysis…

If the Left will accept [Sen. Elizabeth] Warren as “Native American” because she might have had one Native American in her family tree sometime between 180 and 300 years ago, then they have embraced the end of identity politics. By that measure almost everyone in America is a minority.

Best of all was The Onion, whose headline read, “Elizabeth Warren Disappointed After DNA Test Shows Zero Trace Of Presidential Material.”

The unfortunate bit to all of Monday’s idiocy is it won’t dissuade Warren one bit. She’s like every other leftist demagogue on the political scene today — incapable of shame. Liz Warren is Anthony Weiner without the sexting; she likes the attention, even if it’s negative. To her, conservatives scoffing is just more proof that she’s in the right and needs to fight harder.

Speaking of fighting harder, that was the message Hillary Clinton and Eric Holder were vomiting forth last week to those sharing their ideology, and that’s what we got.

In Portland, the Antifa mob has taken over the city’s downtown in something eerily similar to the Munster rebellion — complete with the violent apprehension of the disbelievers and weekend street brawling when non-leftist groups attempted to demonstrate for the return of law and order to the Rose City. And in New York, Antifa trashed the Metropolitan Republican Club with broken windows and threatening graffiti in advance of a speaking engagement conservative provocateur Gavin McInnes was scheduled to make on Friday. When McInnes did show up to speak, he and several members of the Proud Boys, the “Western chauvinist” fraternal organization he started, were set upon by more Antifa thugs in a melee. Three were arrested for beating and robbing a man on the street, but the Proud Boys fought back and turned New York’s Upper East Side into a scene from Gangs of New York.

Again — Antifa instigated the violence, though they decidedly lost the fight. And like in Portland, the local law enforcement had scant interest in doing anything about what is clearly a domestic terror group. New York’s governor, the buffoonish Andrew Cuomo, actually had the temerity to blame the Proud Boys for appearing in public to be attacked.

“Here’s a message from a Queens boy to the so-called ‘Proud Boys,’” Cuomo sneered, “New York has zero tolerance for your BS.”

Nothing about Antifa, though. Just like Portland’s mayor Tim Wheeler has nothing to say about them as they destroy his city.

But tell them that and they’ll deny it to the hilt. Just like Holder denied he meant violence when he told supporters to “kick” the political opposition.

Hurricane Michael passed through the Florida Panhandle on its way through the Southeast last week, and for all the strength it carried — including 155 mph winds and a nine-foot storm surge — it could have been a whole lot worse.

Generally speaking, you probably couldn’t have plotted a storm track for the central Gulf of Mexico which would have taken the storm over a less-populated area. Yes, Panama City was very close to the eye of the hurricane, and damage there is extensive. But compared to what would have happened had Michael scored a direct hit on Pensacola, Mobile, or New Orleans to the west, or to Tallahassee or the Tampa Bay area to the east, things could have been far uglier.

That said, it’s little comfort to the people from tiny Mexico Beach just southeast of Panama City Beach, where the eye made landfall. Put simply, Mexico Beach isn’t there anymore. Most of its 1,200 residents don’t have a home in that once-beautiful community, and may never have one again. The beach cottages which made up the bulk of the structures in Mexico Beach will invariably give way to sturdier, if less charming, high-rise waterfront condominiums as the town is rebuilt and real estate developers seek their opportunities, and those residents may or may not figure into the recovery.

Another perhaps permanent victim of the storm, lying between Mexico Beach and Panama City Beach, is Tyndall Air Force Base — which also took the full force of Michael. So much so that most of the airplane hangars and support buildings at Tyndall lie in some state of destruction and as many as 12 F-22 fighter jets stationed there which for lack of readiness couldn’t be moved were damaged.

Why on earth would the Air Force allow a dozen of its front-line fighter planes be destroyed in a hurricane? Well, if those planes couldn’t be flown out there was no real way to evacuate them from Tyndall. And the current supply chain for F-22 parts isn’t adequate to getting those planes airworthy. The 12 planes likely lost in the storm had been in some cases cannibalized for parts to keep others in the air wing serviceable.

Thank Barack Obama and his management of the Department of Defense for that tale of woe.