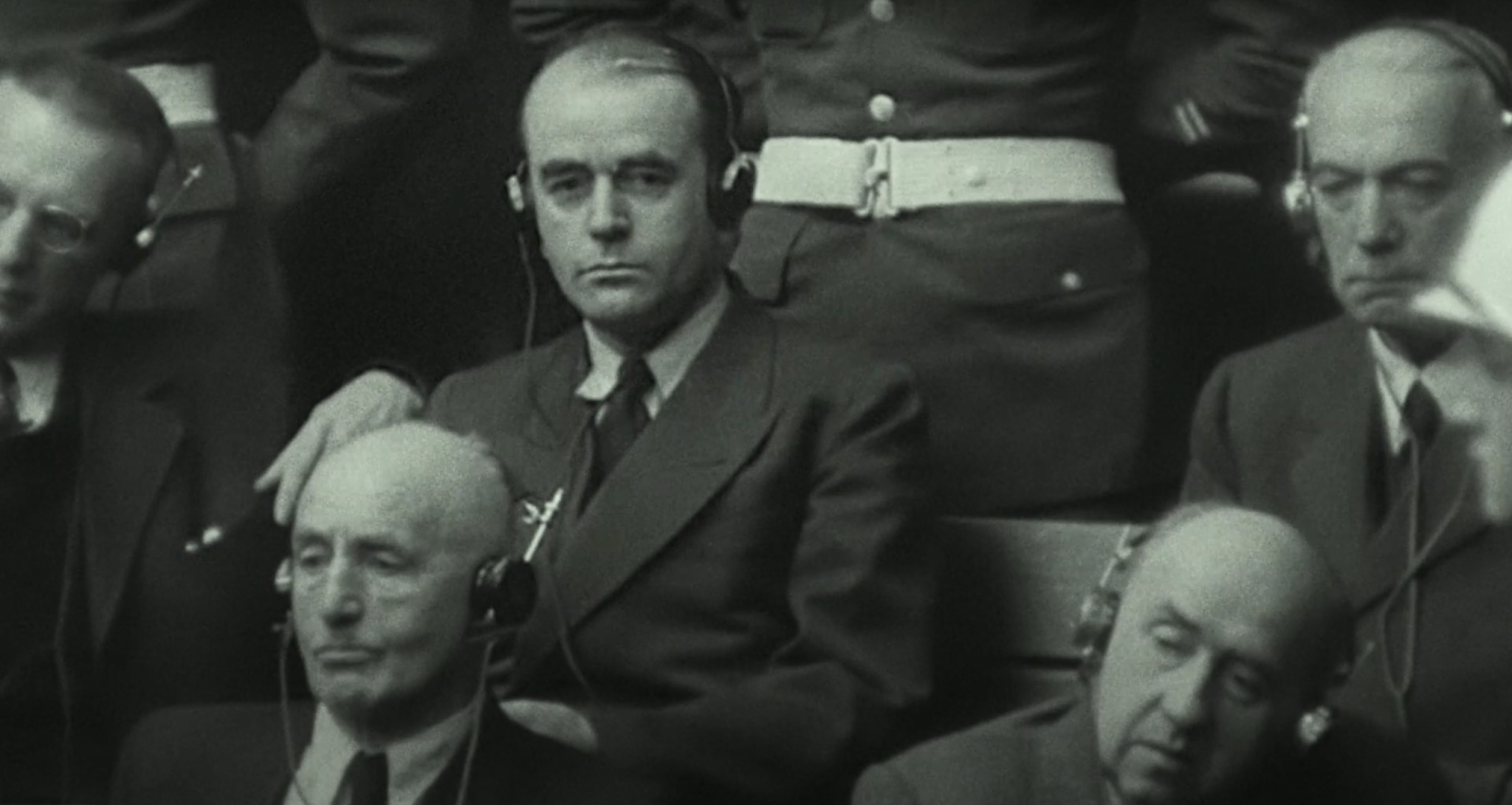 Convicted in the Nuremberg trials, Albert Speer, Hitler’s architect, spent 20 years in Spandau Prison. His release in 1966 made headlines, and his memoir Inside the Third Reich (1970) was translated into 14 languages and sold over a million copies. He became, as we hear in Vanessa Lapa’s new documentary Speer Goes to Hollywood, “a radio and TV star,” giving interviews in German, French, and English. And at one point — and this is the subject of the documentary (which opens in New York on October 29 and in Los Angeles on November 5) — he collaborated on a script for Paramount Pictures based on Inside the Third Reich.

Of course it’s impossible to imagine Paramount wanting to work with Himmler, Goering, or Goebbels, provided any of them had survived the war. But Speer was different. In the years since the war, he’d successfully crafted an image of himself as the “good Nazi” — the man who, although chummy with Hitler, had been too busy designing a beautiful new Berlin that would last a thousand years to know about the death camps. It helped that he didn’t look like anybody’s idea of a big-time Nazi: he was handsome and elegant, a man of culture and refinement who listened to Brahms and quoted Camus, Sophocles, and Goethe.

In private footage, we see him discussing the possibility of a film with his German publisher, who’s concerned that it will be “a Hollywood film that depicts the Third Reich as a Cecil B. DeMille spectacle,” rather than a production “of the highest quality, intellectually, politically, and artistically.” Speer agrees, pronouncing that it would be a shame for the film not to reflect the high seriousness of his own book. In the end, there was interest from several studios, including Warners, but Paramount won out, and Andrew Birkin — a protégé of Stanley Kubrick, who was apparently toying with the idea of directing the picture —  was tapped to write the script.

After writing a draft screenplay, Birkin spent the winter of 1971 at Speer’s home in Heidelberg going through it scene by scene with the former Nazi. Forty hours of their discussions were recorded, and form the backbone for this documentary. (They are supplemented by bits of newsreels, footage of the Nuremberg trials, and home movies of Speer with his wife, Hitler, Magda Goebbels, and others.) The young Brit and the older German seem to have gotten along well. Speer explains that he wants the movie adaptation of his book to be “very far away from a documentary.” Birkin agrees: “It’s a painting, not a photograph.”

In their conversations, Speer confesses that he was appalled, in the 1930s, by the sight of rich Jews in Berlin, “but I can’t say it was really an anti-Semitic feeling. It was a feeling of disgust.” He talks about his use of opera-lighting techniques to make nighttime Party rallies more dramatic: “it looked really great.” When he first got involved with the Nazis at age 29, he says, he “would have sold my soul to Mephisto” for a building project. So when Hitler asked to see some of his architectural drawings, he was thrilled. Indeed, he says of his relationship with the Führer: “I think it was love on the first sight.” The two men became close, but Speer found the guests at Berchtesgaden dull: “There were not many intellectuals in the Party at this time.”

You keep expecting Birkin to get up and say, “Okay, I’m good,” and perhaps hock a loogie at Speer before clearing out. Instead he nods happily along through all of it. One is reminded of Max Bialystock and Leo Bloom, in The Producers, putting on swastika armbands to get Nazi playwright Franz Liebkind to let them stage Springtime for Hitler. Scrutinizing an old photo of Speer, Birkin calls it “marvelous, sort of Marlon Brando.” (In fact it’s more Robert Stack.) They talk casting, and Birkin suggests Donald Pleasence for Hitler, although there’s a teeny problem: Pleasence’s wife’s parents “were in Auschwitz or Treblinka, I’m not sure which,” and Pleasence is a mite touchy about it.

At one point Birkin phones another of his mentors, the director Carol Reed (The Third Man), who congratulates him on a “terrific” script, but also tells him, as gently as possible, that it’s a piece of “whitewashing,” presenting Speer as a “dreamer, who just loves to build things,” rather than as a Nazi with the blood of six million Jews on his hands. Speer, Reed insists, “knew that he was using people from the concentration camps” to work on his building projects, and he should own up to it. Birkin — deflated, and obviously not eager to take Reed’s advice onboard — tells Reed he’ll pass his comments on.

To be sure, Birkin does go on to ask Speer about the camps. Speer acknowledges having known about them, but says he isn’t sure if he was aware of the cruelties; if so, he says, he wiped them quickly enough from his memory. He was too busy, after all, designing the new Berlin — “the capital of the world” — and, in doing so, fulfilling Hitler’s greatest dream. Birkin reassures Speer that “I find it easy to identify myself with you,” but admits that if he’d seen Jewish children being “carted off” he’d probably have had trouble dismissing it from his mind. In reply, Speer insists that he never saw such things — but that if he had, he wouldn’t have “had a sentimental reaction” to them. Whereupon he suggests they move on to the next scene in Birkin’s script.

Anyway, on it goes. Speer recalls his delight when war broke out: it promised empire, and hence a broader canvas for his art. Meanwhile Birkin talks camera angles: for a scene involving hordes of suffering POWs forced to work on Speer’s projects, “I imagine a long shot, in the distance.” They return to the topic of the camps, and this time Speer admits — kind of — to knowing about the Holocaust. “Indirectly I knew from Hitler that he was planning to annihilate the Jewish people,” he says. “He said it quite often. But I had no direct knowledge until ’44,” when a friend told him that “terrible things were happening” in “a camp in Upper Silesia.” Auschwitz, presumably.

Asked about a 1943 speech in which Himmler justified the extermination of Jews — a task, he said, that the Nazis performed “out of love for our people” while still remaining “decent fellows” and thereby writing “a page of glory in our history” — Speer declares it “quite good.” Even after this, Birkin doesn’t head for the exit. Instead we hear him telling Speer the latest bad news from Hollywood: “the Jewish brigade” at Paramount have read “our script” and call it “a complete whitewash” because it includes nothing about the Holocaust.

Ah well. Enough. Long story short: the movie version of Inside the Third Reich ended up not being made. Birkin, now 75, went on to write or co-write such films as Omen III, The Name of the Rose, and Perfume. Speer died 40 years ago last month, still clinging to an international reputation as “the good Nazi.” In the years since his death, however, that image has changed dramatically as new information has come forward proving that — notwithstanding his endless, lavish claims to the contrary — he knew everything about the Holocaust and was intimately involved in its execution.

Thanks in large part to the History Channel, we’ve all been inundated for decades with Nazi documentaries. Still, Speer Goes to Hollywood is a welcome addition to the genre. I’ve already referenced The Producers, but some of the exchanges between Speer and Birkin do indeed come off like material concocted by Mel Brooks. Hannah Arendt spoke of the banality of evil; as Brooks has shown us, you only need to tweak evil ever so slightly to transform it into the darkest of gallows humor. At certain moments in this documentary, there’s not even a need for tweaking: to hear Speer and Birkin talking about Auschwitz one second and Paramount the next is to experience black comedy at its blackest.

One closing thought: if only we had a tenth as many powerful documentaries about Soviet Communism as we do about the Nazis!