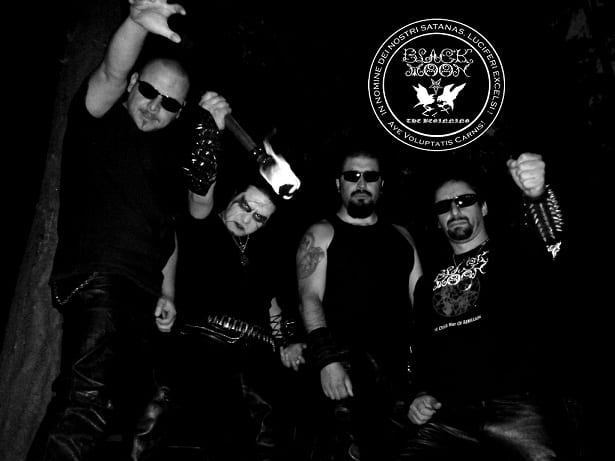 Their sins once included backmasking messages onto vinyl, taking the role of D&D dungeon master too far, spray painting pentagrams and triple sixes under overpasses, and, when really wishing to affirm the faith, ritualistically murdering other teenagers or other teenagers’ parents, usually in Beavis’s America.

In “A new generation of L.A. Satanists finds community in blasphemous times,” the Times correspondent judged one such event hosted by the Jameses “a great night for a heterodox generation of new self-described Satanists who are upending old ‘Rosemary’s Baby’ and ‘Helter Skelter’ stereotypes in service of radical politics, feminist aesthetics and community unity in the divisive time of Trump.”

Don’t call it a comeback. Satan’s been here for years.

He once wore a beatnik beard and a red cape. Now, at least in the City of Angels, the Fallen Angel (or at least his acolytes) drinks Pabst Blue Ribbon 16-ounce cans and identifies as part of the resistance. Whereas that ’80s heavy metal Satanism fell under a lower-case “stuff white people like” moniker, the latest incarnation of Lucifer incarnate appears as a Stuff White People Like entry — surrounded by the likes of My So Called Life, Farmer’s Markets, and Moleskine Notebooks — waiting to happen.

Evil is the new good. Accordingly, newspapers take a light look at those practicing the dark arts. Every month, thousands of witches partake in a waning-moon ritual to protect the planet from the devil figure of devil worshippers: Donald Trump.

“The Donald Trump spell is not a hex or a curse,” Hollywood witch Adams told the UK’s Sun last year of the ongoing campaign of wizardry against the president. “It’s binding Trump and any of his abettors to prevent them from causing harm and destruction to people, animals, the environment, everything.”

Bad no longer receiving bad press may stem in part from one famous member of the press outing herself as a practitioner of witchcraft in a memoir.

Sally Quinn, Washington Post editor Ben Bradlee’s witch-widow and one of D.C.’s most famous hostesses, confessed in her memoir of hexing three people who subsequently died. Regarding her diabolism prefacing a psychic’s death, she wrote: “I vowed once again never to put another hex on anyone.”

Good to know. But, to stay safe, avoid awarding one-star Amazon reviews to Ms. Quinn and if her evil eyes meet yours make sure to burn bay leaves at dawn and dusk or deploy a mirror to reflect the spell back on the high-society sorceress. Either that or hire a good estate planner.

Saul Alinsky famously dedicated his Rules for Radicals to the Light Bearer. John Podesta infamously received an invitation to a “spirit cooking” dinner, whose hostess received an invitation to Hillary Clinton’s ill-fated — one might say cursed! — campaign’s kickoff. Satan, a failure at revolutionary politics, nevertheless makes inroads, here and there, into electoral politics. And his effective PR machine, long relying on the glamour of evil, operates at a hellish pace.

Nobody likes a hypocrite. Sunday school teachers who rip off hookers on Saturday night make us really, really mad. Do-gooder Satanists out to save the world — pursuing “radical politics, feminist aesthetics and community unity” in the name of their religion — irritate terribly, too.

Just give us that old-time religion. And keep six-six-six out of our politics.