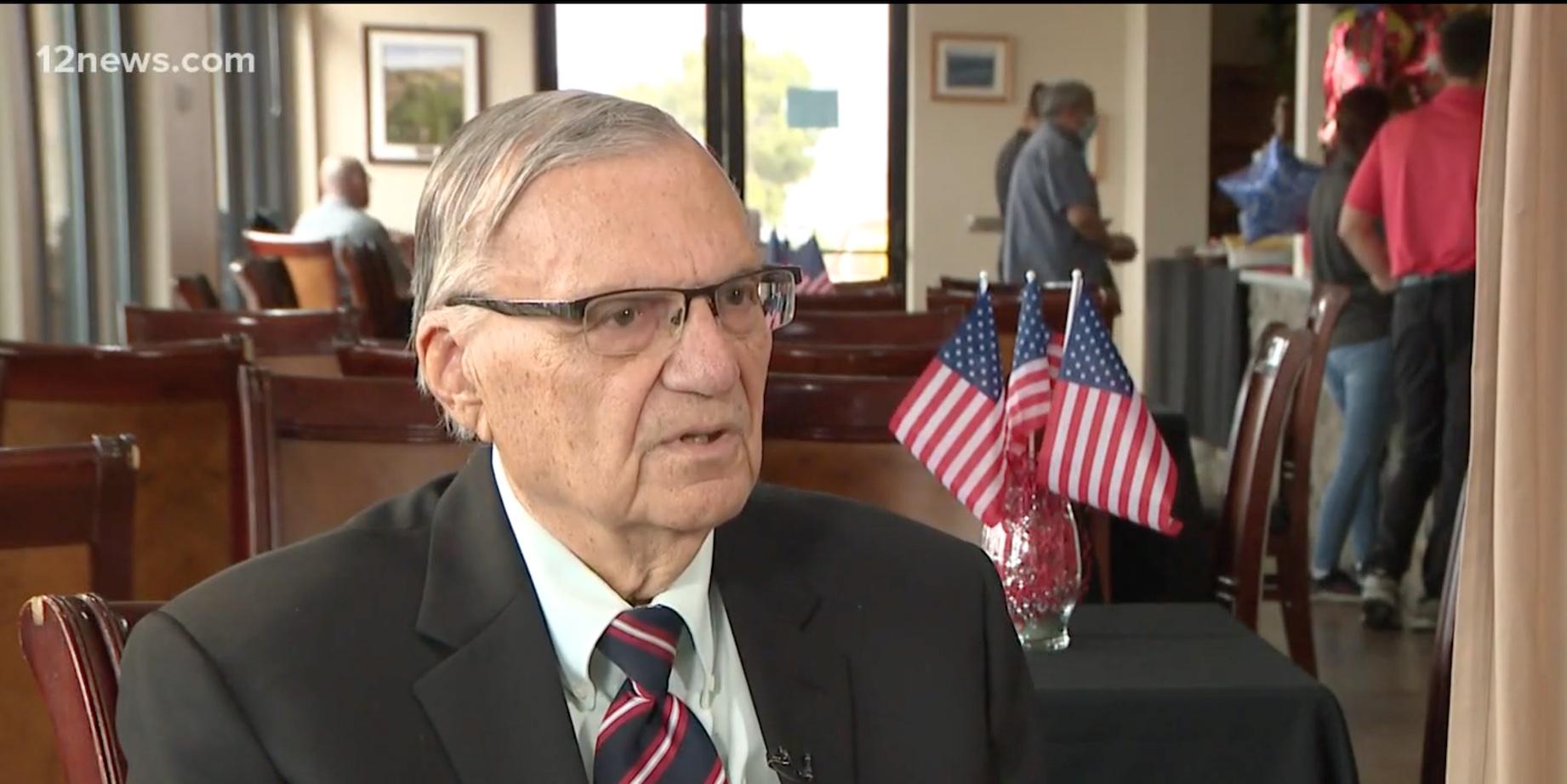 Down below the returns from the high-profile contests in Arizona on the Aug. 2 election night — the GOP primaries for governor and U.S. senator — way down at the bottom of the page, in the fine print, were results indicating that a 90-year-old man was narrowly trailing (too close to call) in his bid to become mayor of a Phoenix suburb.

Yep. “Sheriff Joe” is still in the game. He’s not running for top-cop these days — after losing the Maricopa County sheriff’s job in 2016 and being defeated in a bid to reclaim it in 2020 — but for mayor of Fountain Hills, an upper-class ’burb east of Scottsdale with a population of 24,000. When all the votes were counted on Wednesday night — over a week after election day! — a late surge of in-person ballots, on which he was relying, left him 213 votes short, and he ended up falling to two-time incumbent Ginny Dickey, 51 percent to 49 percent.

He was ahead of the curve on illegal immigration, first recognizing it as an issue in 2005.

It’s not like the old days for “America’s toughest sheriff,” when he steamrolled to the sheriff’s office of Arizona’s most populous county by big margins, culminating in six consecutive four-year terms, the last of which began in 2012. He won in 2000 by 67 to 26 percent, and from then on the margins slowly decreased until the 2012 race, in which he triumphed by 50 to 44 percent. Legal problems and incessant negative press for his stance on illegal immigration caught up with him finally in 2016, as Democrat Paul Penzone, buoyed by a strong Latino vote, ousted him from the sheriff’s office by a 56 to 44 percent tally.

Since then, it’s been a triple defeat — third in the GOP primary for a U.S. Senate seat in 2018; second in the 2020 Maricopa County sheriff Republican primary, which he lost to his former second-in-command; and now a failed bid to run Fountain Hills.

That he could still garner 49 percent of the vote in any election is impressive, given his age and his political liabilities. The fact is, he drags behind him the political-baggage equivalent of a J.Lo entourage. The organizations that lined up to excoriate him and his practices down through the years read like a chapter in P. J. O’Rourke’s Enemies List: everybody from the American Civil Liberties Union to the New York Times, whose editorial board once called him “America’s worst sheriff.” He was accused of improperly investigating crimes, persecuting political enemies, targeting reporters, violating election laws, abuse of power, and improper county expenditures, among other indiscretions, and he has been the target of numerous lawsuits. If you had only the Wikipedia entry on him to go on, you’d put him on the criminality scale one step above Pablo Escobar.

It is the thing that so riled the Left that made him so popular with the public, however: his stance on crime and illegal immigration. As a deterrent to crime, he made a stay in county jail as unpalatable as he could. A year after being elected county sheriff, he constructed a “Tent City,” an outdoor jail for convicted and sentenced lawbreakers. This, in a region where the daily high temperature tops 100 degrees for about half the year. In 2003, he shrugged off complaints from inmates that incarceration under such conditions constituted undue punishment: “It’s 120 degrees in Iraq and the soldiers are living in tents and they didn’t commit any crimes, so shut your mouths!” He erected a 60-foot tower overlooking Tent City, on top of which he hung a large neon “Vacancy” sign that was always alight.

Other innovative practices include feeding the inmates only two meals a day, banning Playboy magazine and other porn from the jail, and starting up an in-house radio station (KJOE) that broadcast “classical music, opera, Frank Sinatra hits, patriotic music, and educational programming five days a week, four hours each day,” according to Wikipedia. He issued pink underwear to the inmates, putatively so they wouldn’t steal them upon release from jail, and even produced pink handcuffs when the pink underwear proved a big hit with the public. In 1995, he started up chain gangs and, a year later, volunteer female chain gangs — the women worked seven hours a day, six days a week. In 2004, he made undocumented immigrants in his jail sign up for Selective Service.

He was ahead of the curve on illegal immigration, first recognizing it as an issue in 2005. He aggressively pursued illegals — too aggressively, it could be said: He engaged in “saturation patrols,” aka “roundups,” in Hispanic neighborhoods, stopping without demonstrable cause Latino drivers for interrogation and targeting businesses that employed Latinos. He said in 2012 that he had rounded up and slated for deportation 50,000 of the 500,000 illegals then believed to be in the state.

It was this over-the-top surveillance that finally proved his undoing. The Justice Department accused him and his office of racial profiling in police stops and detention, unfairly targeting Latinos. He was convicted in 2017, shortly after leaving office, of criminal contempt of court for ignoring a judge’s order to stop detaining people solely because he suspected they were illegally in the country. A few months later, then-President Donald Trump pardoned him before he could be sentenced, to the outrage of progressives and some Republicans.

But Arizona’s governor, Doug Ducey, and prominent conservative Rep. Andy Biggs defended the embattled sheriff for his body of work. Ducey said Arpaio “deserves credit for helping to reduce crime in Maricopa County over his long career in law enforcement and public office.”

An irrepressible publicity hound, Arpaio said in 2012 that he averaged 200 local TV appearances a month and, in 2017, bragged that he had been profiled in 4,000 national and foreign news outlets. He catalogued new mentions of his name. “I average six googles a day,” he said at the time (hi, Joe!).

When asked in 2021 why he was still in politics at his age, he said: “What do you want me to do? Go fishing? Go golfing? I don’t do anything. My hobby is work. I’ve done that my whole life. I’m not stopping now.”

One wonders if his “hobby” might lead to another run in 2024.