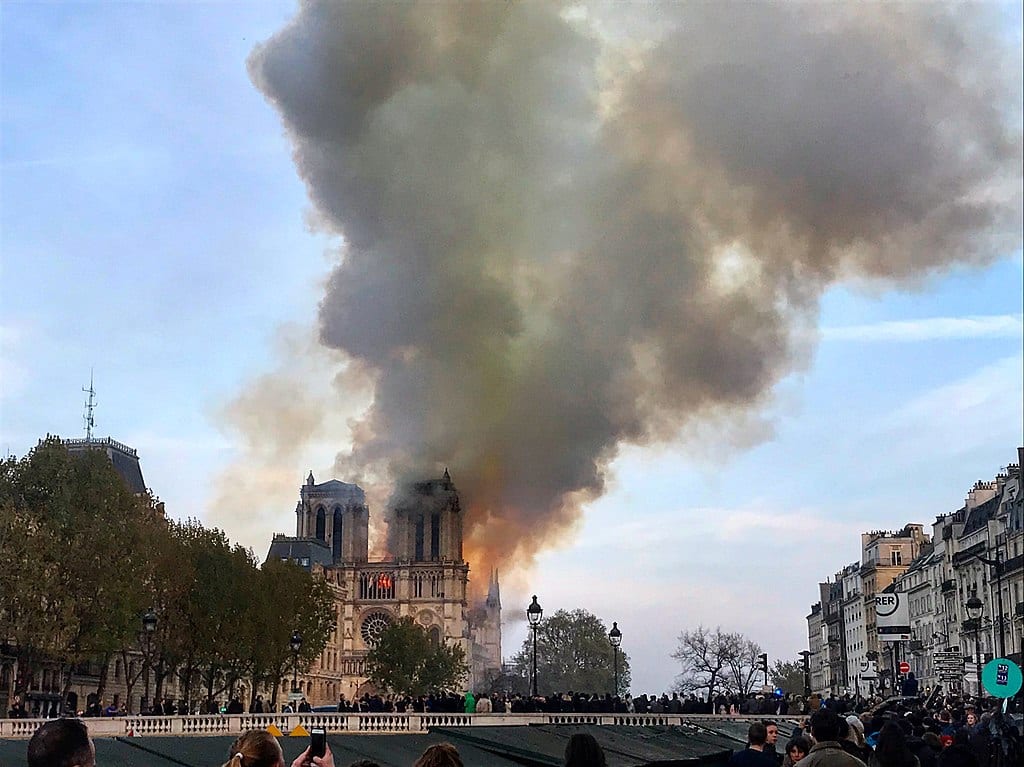 Shep Smith, a popular announcer on Fox News, had Philippe Karsenty, a French businessman and politician who is known as a media critic somewhat in the way of Reed Irvine, on his show the other day, on the subject of the Notre Dame de Paris fire. It did not go well, because M. Karsenty put the event in the context of anti-Catholic violence in France, which has spiked in recent years.

The Saint-Sulpice Church — in the Saint-Germain district, not far from the Ile de la Cité, site of the cathedral — was damaged a month ago, reportedly by what has been determined to be arson. As Melissa Mackenzie noted earlier this week, following Breitbart News, the attacks on church property have become a frequent occurrence. A priest, Father Jacques Hamel, was murdered while celebrating mass at his church in Normandy in January of 2016.

In the nation historically known as the eldest daughter of the Church, this is big news. But the only media that have reported on with anything close to the attention one would expect — I as an old newspaperman, for one — it are Valeurs Actuelles, a weekly newsmagazine of which our friends Philippe d’Ormesson and Michel Gurfinkiel are the publisher and the recently retired editor, and Causeur, an online daily news-and-commentary site whose monthly print edition is one of the most serious and open-minded publications in France, carrying refreshingly intelligent, and witty, essays on the political and cultural transformations taking place in France.

Mr. Smith has every right to feel, as he evidently did, that it was in poor taste to suggest an evil deed where none has been identified. It could be that one will be found after due and diligent investigation. M. Karsenty — full disclosure, whom this author met some years ago — did not claim the fire was due arson. He only said that the context was such that you could be forgiven entertaining the thought it might be.

He went on to write a short piece, in Causeur, right after Mr. Smith abruptly pulled him out of the broadcast, to ask why we should accept “ready-to-wear thinking” before we know for sure what happened. He offered no facts of his own, only noted that the media, broadly, did not have any either yet, but were already assuring its audiences that the fire was due to an accident.

The media, and not only the French media, certainly are derelict in failing to cover anti-Catholic violence in France and the persecution of Christians generally.

A tragic fire and a failure to cover religious news are not self-evidently connected; yet if you were aware of anti-Catholic violence and troubled by the media’s indifference to it, you might indeed, in responding to a television reporter’s question, say something not logically coherent but emotionally understandable: “The core of our history is constantly violated and denigrated or simply ignored, and now this — there must be some connection!” (I am loosely translating what I think he meant to convey.)

A reporter would have used this outburst to elicit a deeper insight into a Frenchman’s shock and sorrow, not score points with a woke audience by shutting him down.

To be sure, there is something to be said for maintaining a certain reserve on the Notre Dame tragedy, at least during the Holy Week and, arguably, until the official reports by the police and fire departments come out. Then, as with all such reports, criticism is welcome, backed, one would hope — in vain? — by investigative work by journalists.

On the other hand, keep in mind Mr. Smith invited M. Karsenty to speak a few words. Did he know whom he was dealing with? M. Karsenty is a serious man, a man of strong views and political positions, and known for confronting conventional wisdom, notably in the media. If Mr. Smith wanted a non-controversial commentator, which in the immediate aftermath of the tragedy it was certainly within his rights to want, he could have picked from the thousands available in Paris or environs.

Was it a case of sand-bagging? Or was Mr. Smith seizing a facile chance to show how sober and non-judgmental his news program is?

The Notre Dame tragedy already has brought out an almost daily stream of anguished commentary — some quite intelligent, mind, including in our pages at TAS— about what it all means, symbolically (in terms of rebuilding a viable religious, and specifically Catholic, France), as well as materially (in terms of physically rebuilding the cathedral).

Just recently, one of France’s leading demographers, Jerome Fourquet, published a book, The French Archipelago, that presents the thesis, backed by facts, that France is on the brink of irreversible de-Christianization, turning into a free-form multicultural society (the “archipelago” of the title) with no unifying faith or institution. The Church as recently as 50 years ago provided the framework of national unity, even for non-Catholics.

It may be worth noting, however, that Victor Hugo, whose novel Notre Dame de Paris (in English, The Hunchback of Notre Dame) included eloquent observations about the erosion of faith and the decline of Catholicism, had it all down, with all that it implied for the French identity.

And this was some 70 years before France officially separated church and state in 1901. The shabby condition of the ancient cathedral, he observed, could not surprise, given the state of the faith. He said it so well, however, and the novel was so popular, that a major restoration project was launched and, with it, a kind of marketing campaign which led to Notre Dame Cathedral becoming the best known church in Europe, and the emblem of France.

Naturally, today, critics are heard who allege that the French state’s paltry budget for the upkeep of the cathedral is indirectly to blame for the disaster. A better maintenance program would have precluded whatever accident occurred, is what they mean. That may be arguable; but as with the suggestion of arson, it seems more appropriate to mourn and wait for the facts, while hoping and working for the spiritual and national revival that tragedies have been known to carry in their wake.

M. Karpenty’s cri de coeur may have been uttered at the wrong time and in the wrong medium, but a shrewd and curious reporter would have seized it to ask a real question or two on the fate of France and its Church. Unfortunately, Mr Smith deflected this and turned a faux-pas, if that is what it was, into an example of the media’s dereliction in favor of its own self-importance.