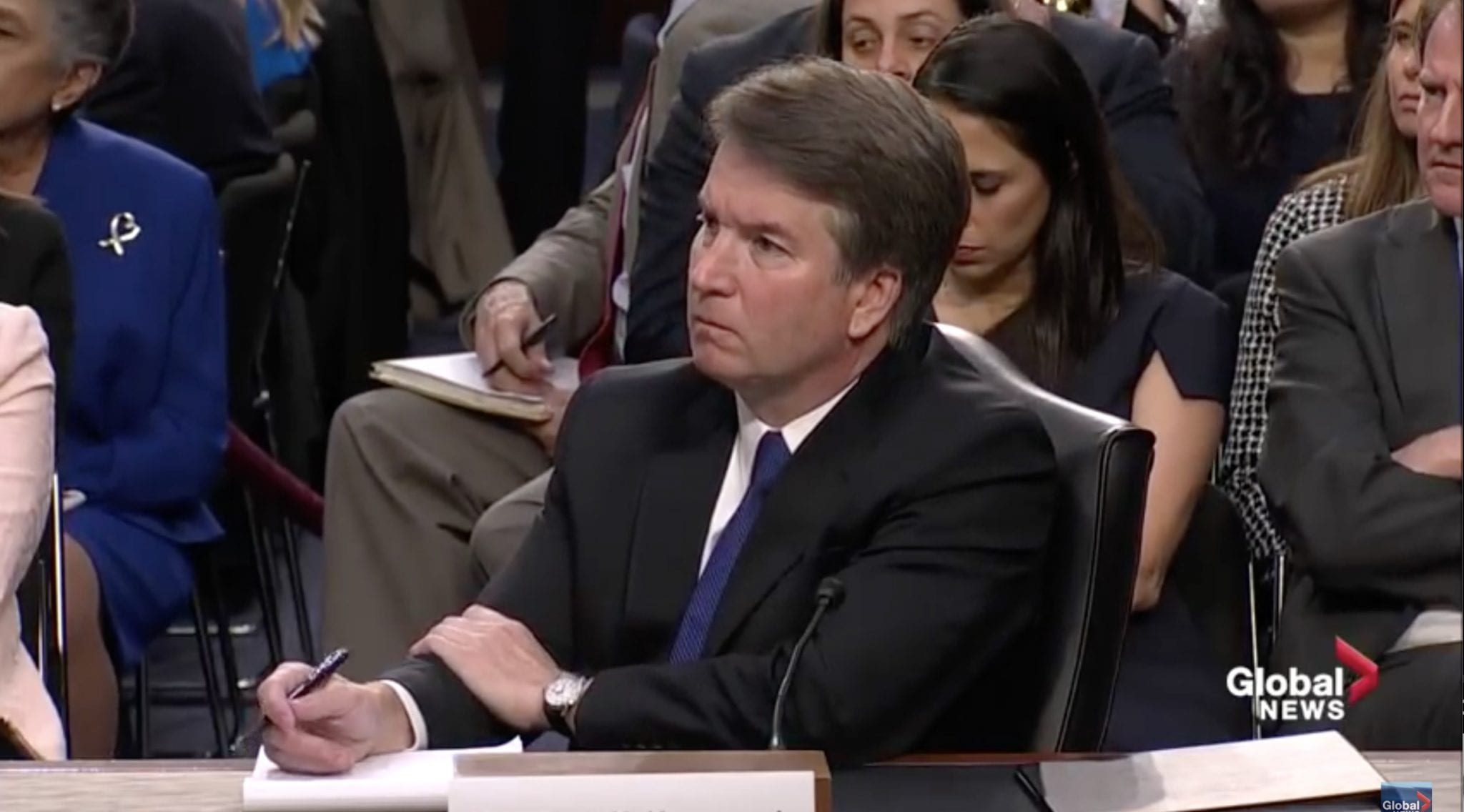 During the first two days of the Kavanaugh confirmation hearings the Democrats on the Senate Judiciary Committee demonstrated why their party lost control of Congress, and that they still can’t be trusted with a majority in either house. In addition to interrupting the proceedings countless times on hopelessly frivolous grounds and engaging in outrageous demagoguery, they openly encouraged demonstrators to disrupt the hearings with such disgusting behavior that Judge Kavanaugh’s wife was forced to lead his children out of the room on the first day. These are the very Democrats, remember, who routinely lecture President Trump on matters of decorum.

Indeed, as if to highlight the hypocrisy of their antics, Democrat Richard Blumenthal called for an adjournment of the hearing after denouncing it as a “charade.” This is the same Senator whose attacks on the last Trump nominee to the Supreme Court — now Associate Justice Gorsuch — about his biography were so egregious that a group of Medal of Honor winners wrote an open letter reminding the public of his false claims to have served in Vietnam: “The fact you repeatedly and consistently claimed to have served in Vietnam is a gross case of stolen valor in our opinion.” But Blumenthal’s hypocrisy was just part of the opening salvo in the Democratic attempt to disrupt the hearings.

Their antics were so transparently scripted that even Slate pointed out that the first interruption of the first day’s proceedings came before the Chairman could finish his opening sentence. The story’s author suggested that the Democrats “need to move on from their Kavanaugh document obsession and focus on what really matters.” On Wednesday, they made it clear that they weren’t open to such sensible advice. Chuck Schumer attempted to have the hearing halted early, but was outmaneuvered by GOP Majority Leader McConnell, and Senator Dick Durbin actually had the crust to ask Kavanaugh to “hit the pause button” on the hearings. The judge declined this ridiculous request:

Senator, I do not believe that is consistent with what prior nominees have done who have been in this circumstance.… It’s a decision for the Senate and the executive branch. Justice [Antonin] Scalia explained that very clearly, I thought, in his hearing.

When the Democrats finally began interrogating the nominee, it became even clearer that they were acting in bad faith. Senator Feinstein asked if the President could be subpoenaed, a query involving the ongoing strategy by the Mueller investigation to snare Trump in a perjury trap. Kavanaugh didn’t bite: “That’s a hypothetical question.… As a matter of the canons of judicial independence, I can’t give you an answer on that hypothetical question.” Senator Leahy, also alluding to the Mueller investigation, asked whether President Trump could pardon himself. Kavanaugh pointed out that this was yet another hypothetical, and stuck to his policy of not engaging in such speculation:

The question of self-pardons is something I’ve never analyzed. It’s a question I have not written about.… It’s a hypothetical question that I can’t begin to answer in this context.

Democratic Senator Chris Coons, also with the Mueller investigation in mind, asked Kavanaugh about the independent counsel law and a statement the judge had once made to the effect that it was a “constitutional travesty.” Because the Senator was obviously confusing the independent counsel law with the special counsel system, Judge Kavanaugh explained that the former statute no longer exists. Coons finally unearthed his scripted question: “Can the special counsel be fired at will, or only for cause?” Kavanaugh replied, “That is an open question in which you would need to review the legal arguments and would need to keep an open mind.” Coons continued to maunder:

Frankly, judge, your views about executive power that you have detailed, what you like to overturn and what limits you think there should be, really leaves me concerned. It’s because of our current context, because of the environment that we’re operating in.

The “environment that we’re operating in” was on the mind of Senator Stolen Valor when he decided to participate in what he characterized Tuesday as a “charade.” Like every other Democrat on the committee, he had his mind on getting Trump and how Judge Kavanaugh’s confirmation might impede that project. Blumenthal thus asked whether the judge would pledge to recuse himself on any future issues concerning criminal or civil liability for President Donald Trump. Kavanaugh emphasized the need for an independent judiciary, and refused to make any such pledge: “I should not and may not make a commitment about how I would handle a particular case.”

And so the long day wore on. When asked if a former president would be immune from being sued or charged with a crime long after leaving office he reiterated, “No one has ever said that the president is immune from civil or criminal process. The only question is whether the process should occur while the president is in office.” The major precedent here is, of course, the Paula Jones civil case against Bill Clinton. But that’s ancient history, and Clinton was a Democrat. His fellow Democrats on the Judicial Committee have a different set of rules for Republicans, and that could not have been clearer than it was during the first two days of the Kavanaugh confirmation hearings.

The confirmation of a Supreme Court Justice is a serious undertaking. But the Democrats have shown themselves to be utterly irresponsible in the discharge of their constitutional duties in this process. Their frivolous objections to proceeding with the hearings, despicable coordination with protesters whose antics were so disgusting that the nominee had to remove his children from the room, and their lack of real concern for any issue unrelated to removing the President from office reveal that the Democrats are too corrupt to be trusted with real power anytime soon. They are like Lucius in The Golden Ass. They are not utterly lost, but redemption is a long way in the future.