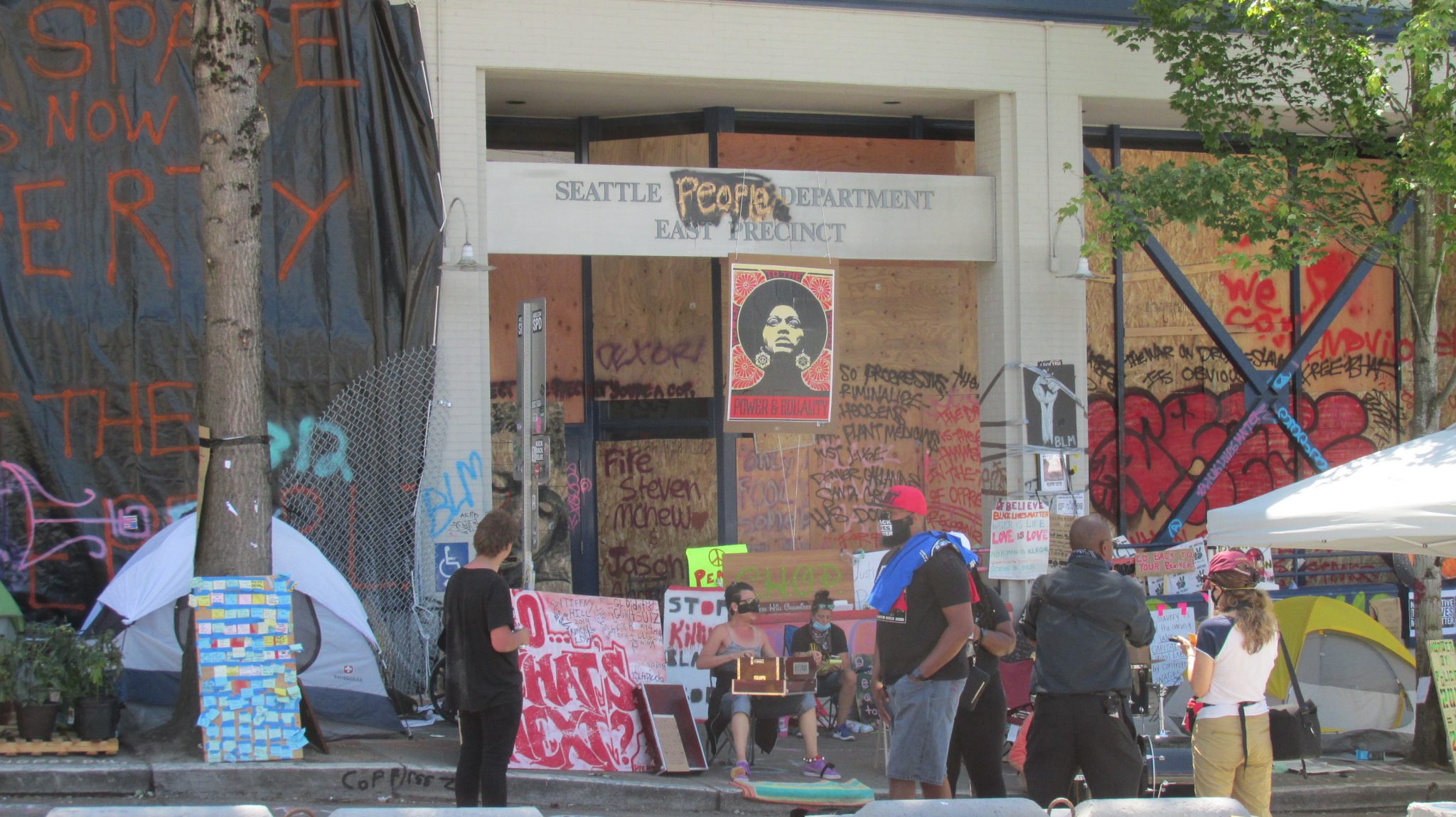 It’s Saturday, May 30, 2020, and thousands of protesters glut the Seattle streets. By mid-afternoon the mob grows to more than 10,000 Black Lives Matter activists, Antifa thugs, and anarchist shock troops. What starts as largely peaceful demonstrations descends rapidly into largely violent and destructive riots.

“No justice, no peace,” they holler, as they hurl Molotov cocktails at police cars, bash in store front windows, and loot jewelry, fashion clothing, and cheesecake — yes, cheesecake. The popular Cheesecake Factory was not spared.

“I can’t breathe,” they chant, as they hustle off with heaps of stolen goods. “Cops Killed George Floyd,” they shout, as they smash storefronts and storm police precincts. “Kill all cops,” they scream. “All cops must die.” Shrieking crowds assault the police, targeting their eyes with green lasers, splashing them with paint, caustic chemicals, and flammable liquids.

“Whose streets?” they yell. “Our streets!,” while brandishing nail-studded plywood shields and steel bars.

By midday Sunday, hundreds of buildings and businesses had been damaged, looted, and fire-bombed. Seattle’s historic China Town was all but destroyed. The unrest continued sporadically for over a week, until the criminal core of rioters settled on Capitol Hill.

To avoid further bloodshed, Mayor Jenny Durkan directed her police chief, Carmen Best, to evacuate the Capitol Hill police precinct. “Protesters have requested it, and they want the streets open for peaceful protests, and we’re going to facilitate that for them,” Best said. “This is an exercise in trust and de-escalation.”

Mayor Durkan assisted the rioters in cordoning off six city blocks and all of Cal Anderson Park with concrete barriers placed by Public Works. She promised to provide portable toilets for comfort and tents for shelter. The anarchists gleefully accepted, declared their new real estate “Cop Free,” and created barricaded checkpoints to prevent entry or egress from their newly declared “Capitol Hill Autonomous Zone.” Residents returning home were stopped by armed thugs and forced to produce identification to prove that they lived within the zone. Some of the goofier occupiers considered issuing CHAZ passports and visas, and even issuing CHAZ script as currency. 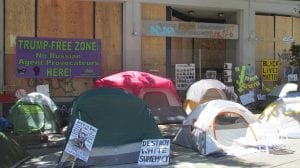 When asked what she would do to protect the businesses and residents trapped within CHAZ, Mayor Durkan said the “protesters” were simply exercising their First Amendment Rights and were indeed demonstrating “true patriotism.” She suggested that no such protection was necessary. “Who knows,” she said. “This might be a new summer of love.”

Within days, Capitol Hill business and store owners complained that they were being shaken down for “protection money.” In the span of the next three weeks, two dozen muggings and over a dozen rapes were reported within CHAZ — or as it was rebranded, CHOP (Capitol Hill Occupied Protest). Multiple robberies, break-ins, and arsons were reported, but could not be responded to. Over a dozen shooting incidents were reported in and around CHOP. Reports are sketchy, but police blotters report two dead and six hospitalized for gunshot wounds. Several remain in critical condition.

The revolving leadership of the Animal Farm–esque “coalition” of protesters-cum-rioters-cum-revolutionaries-cum-community organizers ebbed and flowed, succumbing to various carrots and sticks proffered by the city in belated attempts to regain control. With each successive change in warlords, their numbers dwindle.

But Capitol Hill may never be the same. A coalition of property owners, residents, and businesses are suing the city for conspiring with the occupiers:

This lawsuit is about the constitutional and other legal rights of Plaintiffs — businesses, employees, and residents in and around CHOP — which have been overrun by the City of Seattle’s unprecedented decision to abandon and close off an entire city neighborhood, leaving it unchecked by the police, unserved by fire and emergency health services, and inaccessible to the public at large. The City’s decision has subjected businesses, employees, and residents of that neighborhood to extensive property damage, public safety dangers, and an inability to use and access their properties.

On my last visit to the CHOP, I witnessed a war zone — city streets littered with trash and rubble, and virtually every storefront covered with sheet after sheet of graffiti-sprayed plywood and particle board. Profane and hateful messaging defaced every surface, from sidewalks and streets to walls and barricades: “Kill KKKops,” “No Justice No Peace,” “All Cops Must Die,” “Black Lives Matter,” “F**k Cops,” “Reparations Now,” “Kill White Privilege,” “Dead Cops Now,” “Murder the Murderers,” “All Whites are Racist,” “All Cops are B*st*rds.” There was no trace of the popular media’s claims of “block party atmosphere” or the mayor’s “summer of love.”

There was no visible leadership or organizational structure — none that I could see. No one seemed to be in charge. A few dozen Millennial or Gen-Z kids shambled around in drug-fueled stupors, and as many lay collapsed and comatose in front of doorways. It was difficult to distinguish between the homeless and the occupiers. Most were young. Most were white. All were dirty. None seemed politically motivated, or particularly dangerous.

On the other hand, they were still there, and sometimes even bad leadership is better than no leadership. The lawful residents remain at risk. 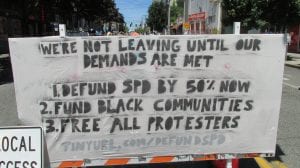 Mayor Durkan made a sort of a deal with the handful of remaining “shot callers” to reopen CHOP on Friday, June 26 — but the Public Works heavy equipment dispatched to start opening up the streets and hauling away the mess was blocked by a handful of “protesters” who apparently didn’t get the word.

She tried again on Sunday, June 28 — and again, despite “shot caller” assurances, failed to make any progress clearing the barriers. That afternoon, City Council member Kshama Sawant led scores of angry Black Lives Matter and Seattle Democratic Socialists of America “activists” to the mayor’s home, brandishing “Defund Cops Now!” and “All Cops Are Bastards” signage, demanding that the mayor step down.

On Monday, June 29, CHOP “security” fired on two black teenagers driving a stolen car through Cal Anderson Park, killing one and critically wounding the other.

The assault on her home, and subsequent shooting of the two teenagers, forced the mayor to act. At 5:28 a.m. on July 1, Seattle mayor Jenny Durkan issued an executive order declaring the occupied neighborhood “an unlawful assembly.” One hundred police officers arrested 70 die-hard lawbreakers, cleared out the barricades, and retook the East Police Precinct. Over the next few days, small groups of violent thugs made half-hearted attempts to “Retake CHAZ,” and a particularly violent mob tried to take over the West Precinct, but the worst was over.

Mike Howard has traveled extensively in Africa, Asia, Europe, the Caribbean and the South Seas — winning hearts and minds in and out of uniform. Now working exclusively freelance, he is fluent in German and English, with survival skills in French, Haitian Creole, Russian, Standard Arabic, Swahili and Samoan.