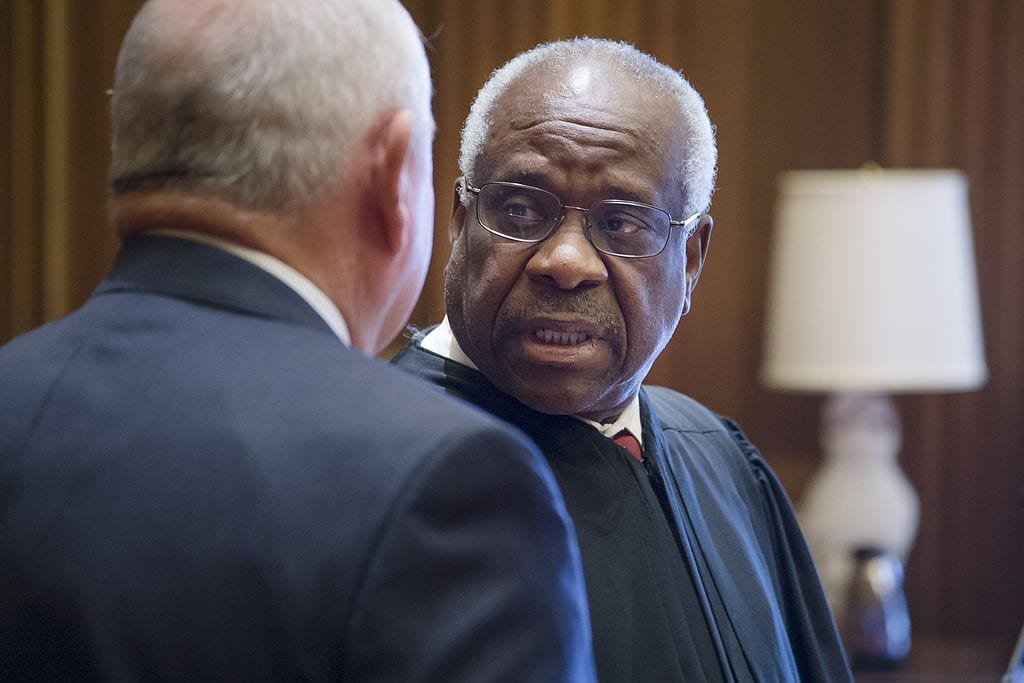 Yesterday, the Supreme Court handed down a ruling in a high profile case that combines a major victory for free expression with a serious setback for the abortion industry. In National Institute of Family and Life Advocates v. Becerra, the Court reversed an appellate court ruling on a California law requiring crisis pregnancy centers to advertise state-subsidized abortion clinics in their waiting rooms and in handouts to patients. Such centers are typically run by pro-life religious groups, who challenged the law as an unconstitutional infringement of their free speech rights. In an opinion written by Justice Thomas, SCOTUS agreed:

We hold that petitioners are likely to succeed on the merits of their claim that the FACT Act violates the First Amendment. We reverse the judgment of the Court of Appeals and remand the case for further proceedings consistent with this opinion.

The “FACT Act” was passed in 2015 by California’s Democratic legislature under the Orwellian moniker, “Reproductive Freedom, Accountability, Comprehensive Care, and Transparency Act.” Its true purpose was, of course, to restrict freedom, accountability and transparency. It was an obvious attempt to make it as difficult as possible for these centers to offer pregnant women other choices than the “health care” peddled by abortion mills like Planned Parenthood. A legal group representing the crisis centers challenged the law with predictable results in the Ninth Circuit, whereupon the case was taken up by SCOTUS last November.

The abortion industry has long been engaged in a nationwide propaganda campaign against crisis pregnancy centers. Labeling them fake women’s health centers, the mouthpieces of Planned Parenthood have accused them of multifarious offenses, including the crime of being affiliated with (gasp) “religious organizations.” This attack has been abetted by the Democratic legislatures of states like Hawaii and Illinois, but the California law was the worst. The “FACT Act” required “licensed” pregnancy centers to post the following language in their waiting rooms, and to include it in patient handouts as well as their advertising:

California has public programs that provide immediate free or low-cost access to comprehensive family planning services (including all FDA-approved methods of contraception), prenatal care, and abortion for eligible women.To determine whether you qualify, contact the county social services office at [insert the telephone number].

The law also required “unlicensed” centers (those focused on non-medical pregnancy services involving clothing, feeding, and diapering newborns) to post the following in their waiting rooms and to include it in handouts and advertisements:

This facility is not licensed as a medical facility by the State of California and has no licensed medical provider who provides or directly supervises the provision of services.

Such “compelled speech” isn’t permissible under the First Amendment, particularly when it conflicts with the mission of a center and the beliefs of its operator. During oral arguments, Justice Kennedy confirmed that the “unlicensed” notice would apply even to a center whose signage consisted of nothing more than a poster containing the words, “Choose Life.” Even worse, the law was clearly written at the behest of the abortion lobby with this specific group of pro-life centers in mind. This kind of targeting was even questioned by Justice Kagan during oral arguments, and it was criticized by Justice Thomas in his opinion:

Assuming that California’s interest in providing low-income women with information about state-sponsored service is substantial, the licensed notice is not sufficiently drawn to promote it. The notice is “wildly underinclusive” … because it applies only to clinics that have a “primary purpose” of “providing family planning or pregnancy-related services” while excluding several other types of clinics that also serve low-income women and could educate them about the State’s services.

In addition to putting paid to this outrageous targeting of a specific group of centers, the ruling makes it clear that “compelling petitioners to speak a particular message” is unconstitutional as it applies to both the “licensed” and “unlicensed” centers. Some media outlets have glommed onto the words, “likely to succeed,” used by Justice Thomas to suggest that there is some ambiguity in the ruling concerning the law’s constitutionality. That verbiage is employed because the case involves a preliminary injunction. Justice Kennedy’s concurring opinion should remove any doubt about the majority’s opinion of the FACT Act in the context of the First Amendment:

This law is a paradigmatic example of the serious threat presented when government seeks to impose its own message in the place of individual speech, thought, and expression. For here the State requires primarily pro-life pregnancy centers to promote the State’s own preferred message advertising abortions.… Governments must not be allowed to force persons to express a message contrary to their deepest convictions. Freedom of speech secures freedom of thought and belief. This law imperils those liberties.

There obviously isn’t much ambiguity there, so most media outlets focus heavily on Justice Breyer’s dissenting opinion, wherein he claims the law should have been upheld because SCOTUS has done so on state laws that “required the doctor to tell the woman about the nature of the abortion procedure, the health risks of abortion and of childbirth.” This is a classic example of special pleading. Justice Breyer knows perfectly well that asking a doctor to discuss the risks of a procedure isn’t the same thing as jamming state-approved speech down the throats of people whose deeply-held beliefs forbid them from uttering the words.

The Court did the right thing in NIFLA v. Becerra. The tone of the oral arguments suggested that it might be an abortion-related case in which one of the liberal justices could let go of ideology. Some of Justice Kagan’s queries suggested she might do so. In the end, the “right” to kill one’s unborn child is a liberal sacrament that she couldn’t bring herself to rule against, even if it meant ignoring the First Amendment. There’s a lesson there for conservatives who like to kvetch about the GOP. Think about the next Supreme Court opening. Anyone out there want a Schumer-dominated Senate to approve President Trump’s next SCOTUS nominee?