School climate strikes are the political equivalent of pulling a fire alarm. It’s a sick day with the added social clout of conforming to a generation-wide virtue signal. Even the new Superman is in on the action, joining his pink-haired “hacktivist” boyfriend on the picket line. (Never mind that one of his powers is frost breath, meaning he could skip the virtue-signaling and refreeze the polar caps in an afternoon if he wanted.) Millions have participated because getting kids to cave to peer pressure is the easiest job for an activist. You think being the one student in uniform on a non-uniform day is bad? Imagine outing yourself as the one person in the class who wants the planet to burn.

Greta Thunberg — creator of the popular truancy excuse — has become the proxy for an entire generation’s self-obsession. When she arrived in Glasgow for COP26, she was mobbed by rainbow-haired sycophants sorely needing a shower. (All wearing the masks which now outnumber the jellyfish in our oceans.) The choral chanting of where we can “shove [our] climate crisis”; the celebrities reposting her inaugural speech like a blessed effigy to their Instagram feeds; the $31,900 statue erected of her at Winchester University … all these religious gestures put this then-child on a pedestal, exonerating her despite her complete ignorance of environmental issues. Joining this Church of Thunberg — either with tweets or by marching in Glasgow’s streets — is the latest trendy way to show your school friends you’re “one of the good guys.” 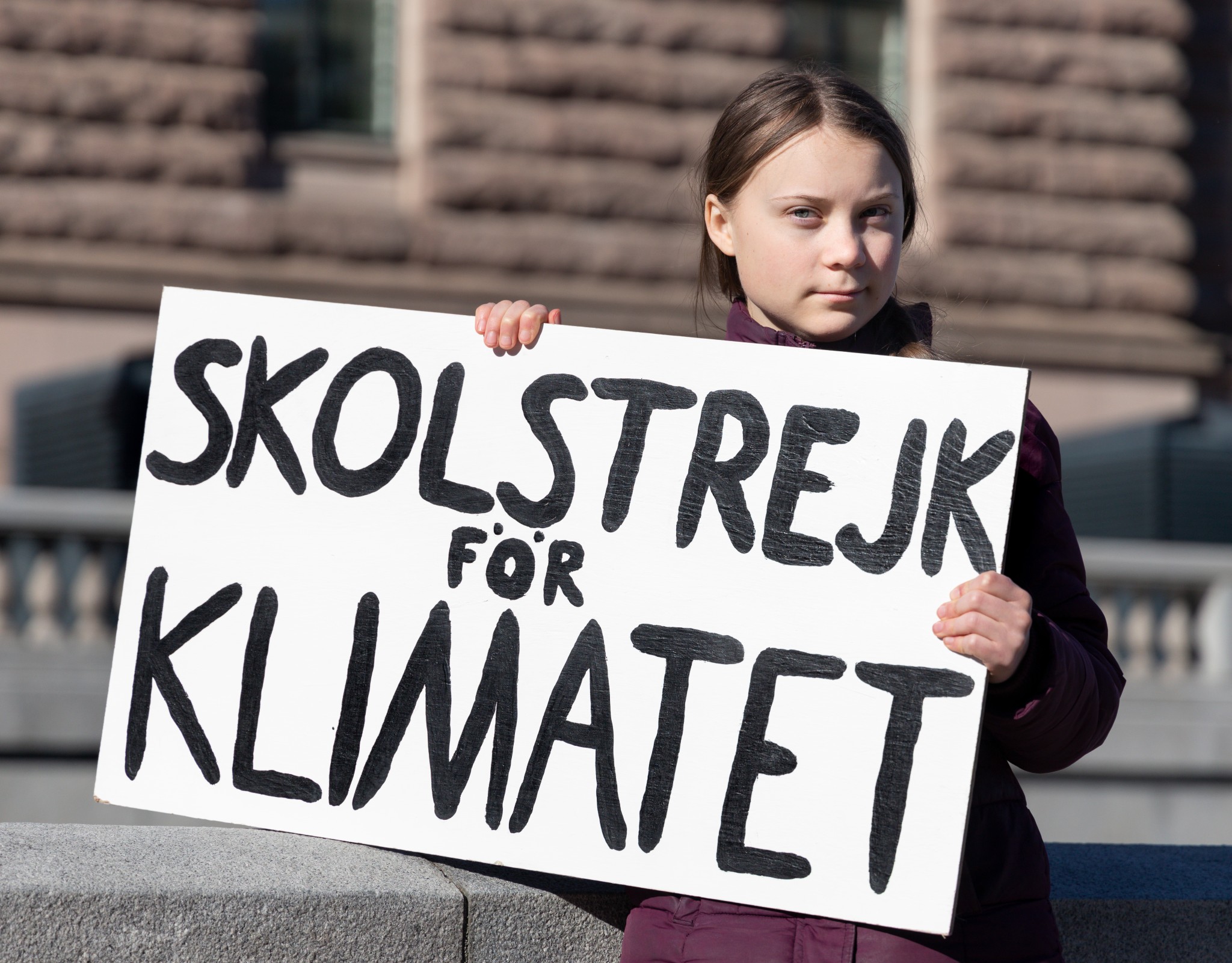 In the U.S., the Sunrise Movement is encouraging students to hunger-strike outside the White House, invade the offices of senators, and gather outside politicians’ homes to make noise in their neighborhoods. All this disruption is to support Rep. Alexandria Ocasio-Cortez’s “Green New Deal,” the killing farting cows part and all.

The media’s veneration of child doomsday prophets shows just how far into a nihilistic pit our need for a grand narrative has fallen. Andrew Breitbart’s old adage, “Politics is downstream from culture,” is followed by Michael Knowles’, “And culture is downstream from religion.” We once worshipped a man who was put to death to show us a path to eternal and equal salvation. But as church-going has waned, any hippie with a hashtag can put himself on the “right side of history” for the 15 minutes of fame Andy Warhol warned us about.

When heroism is inverted to collective conformity to an ideological cause, it becomes convenient to classify yourself as morally righteous with little effort. It’s also a simple strategy to divide and conquer populations by issues. Anyone who questions or criticizes sacred cows is designated a “climate-denying” villain who deserves crucifixion for not conceding that the sky is falling.

We’ve come to expect this fanatical behavior from eco-terrorists like Extinction Rebellion and Insulate Britain. These groups turned the trip to COP26 into a pilgrimage, with many marching from as far as Madrid to Glasgow, like some sort of silly Spanish eco-inquisition. They venerate their founder, socialist egoist Roger Hallam, like a scraggly second coming. They offer up ambulance patients as sacrifices to appease their sun god. They’re coached in doomsday predictions during kumbaya struggle sessions. And they throw themselves underneath the wheel-arches of a Jeep like Emily Davidson at the Epsom Derby.

But when this enters our classrooms, it becomes dangerous. One in six children suffers from a probable disorder due to lockdowns, and activists are willing to worsen this by inducing “climate anxiety” in other people’s kids. Some young women are sterilizing themselves to reduce their carbon footprints after being bombarded with articles which frame humanity as a burden on the Earth. Even Sen. Bernie Sanders, endorsed using abortion as a means of population control to lower carbon emissions at his CNN 2020 campaign town hall. Pushing a sense of impending dread on impressionable minds fashions them into foot-soldiers for socialism.

When heroism is inverted to collective conformity to an ideological cause, it becomes convenient to classify yourself as morally righteous with little effort.

Greta’s climate strikes are a self-defeating distraction. They keep young minds immobilized by ideological anxieties, instead of questioning why world leaders are taxing and spending away our futures. (READ MORE: Scoldilocks, Or the Story of Greta Thunberg)

No nation got more eco-friendly by being poorer. The Kuznets Curve proves environmental consciousness correlates with increasing GDP. When a country has reached the apex of burning fossil fuels, they adopt new technologies and can afford to regrow their forests and clean up their air. Malthusian predictions about overpopulation, ozone holes, and acid rain all failed. The global headcount soared beyond seven billion, while food and fuel poverty continued to drop pre-lockdown. That’s thanks to the power of profit, not bunny-hugging socialism, which has ended in bloodshed everywhere it was tried. The only reason teens and 20-somethings can sit around bashing capitalism on Twitter is because the Industrial Revolution means they don’t have to tend fields until they drop dead at 50.

So stop throwing tantrums and show some gratitude for sacrifices made in human history. Abandon performative activism for practical action. If you want to conserve our world, stop going on woke walkouts to miss the math test you didn’t study for.

Connor Tomlinson is the Policy Director for the British Conservation Alliance, and a Young Voices UK contributor. He makes regular appearances in 1828, American Spectator, on talkRadio. Follow him on Twitter: @Con_Tomlinson